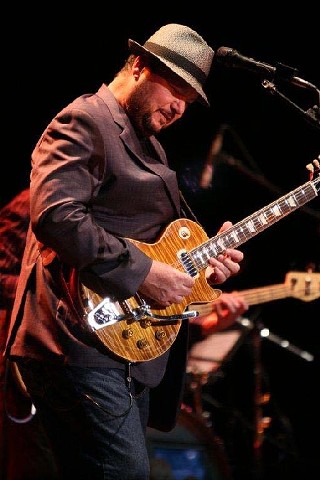 Christopher Cross, the captain of yacht rock, docked in Tucson for a nostalgia-filled performance, part of a tour to promote his newest album, Doctor Faith.

Cross, who was welcomed with warm applause, was joined by five extremely talented people, including Kiki Ebsen on vocals and keyboards, and David Mann, who took saxophone-playing to a whole new level.

The sweetness of Cross' high vocal range remains unchanged after a musical career that has spanned more than 30 years, and the performance touched on almost every album in his arsenal. He tastefully interspersed songs from his new album with megahits from earlier in his career (the very same megahits which, Cross himself pointed out, were most likely playing in the background while people in my age demographic were conceived). One highlight, a duet, was the 1998 song "I Know You Well." It was a beautiful play on traditional vocal roles, with Ebsen singing at the lower end of her range, while Cross reached for the top of his.

The material written from 1991 to the present took on more of a folk vibe, rather than his signature hook-laden jazzier style, which was so prevalent in the 1980s. His songwriting has shifted over the years from slightly metaphorical and broadly applicable to quite literally autobiographical. Cross explained the meaning and/or origin of each song; the tunes that stood out as being super-catchy were all collaborative efforts with songwriting talents such as Michael McDonald, Burt Bacharach and members of Steely Dan.

After being subdued for most of the evening while playing within the constraints of soft rock and folk, the backing musicians were finally freed from their cages for solos with three songs left in the set; there was a palpable energy shift. Baby boomers sprang to life, cheering and clapping to "Arthur's Theme (Best That You Can Do)" and "Ride Like the Wind." Cross had one particularly ferocious guitar solo during "I Really Don't Know Anymore." I didn't know he had such fantastic guitar-geekery in him.

Overall, it was a treat to see music in a live setting that was so pervasive throughout my younger years. Nostalgia overload, indeed.