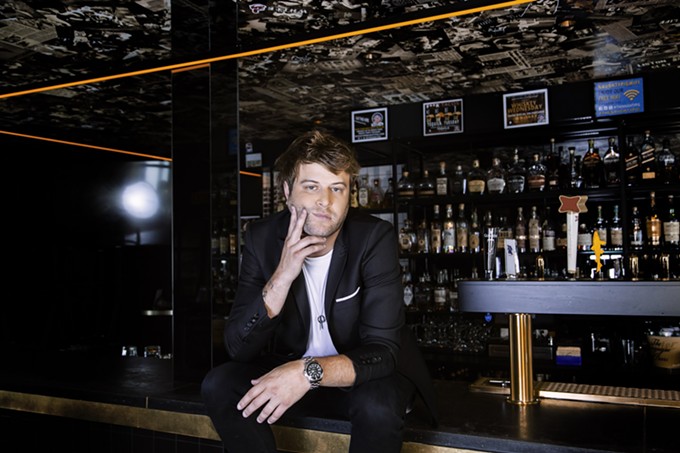 (Kay Kay Blaisdell/Contributor)
Colin Dieden, the former singer with The Mowgli’s, describes the music of Little Hurt as “depression pop.”

While in The Mowgli’s, he had nine bandmates to answer to. This time around, he’s satisfied making his own music, which he describes as happy-sounding melodies melded with incredibly sad lyrics.

“That’s always been my style, even in The Mowgli’s,” Dieden said. “If you get into those songs, they all sound happy but often, you’ll find they’re pretty sad. I’ve always liked the dichotomy between really sad lyrics and happy melodies. It’s like sending someone a really bad Christmas present but it’s wrapped nicely. It's like, ‘Here’s this horrible thing,’ but I’m going to make it something…palatable.”

“I hope that it will not be bad, most of all,” Dieden said. “I’ve always put on a high-energy show. I try to involve the audience and, you know, people are paying money, so let’s make them have a good time.”

The alt-rock band The Mowgli’s formed in 2010 in Calabasas. In the decade he was with the band, Dieden said he learned to live in the moment — no matter how cliché that sounds.

“The exciting stuff that you think you’re building up to in life is actually happening right now,” Dieden said thoughtfully. “These are the cool things that are happening right now and (meanwhile) I’m just waiting for the next (thing). I kind of blew through it like on a motorcycle when I wish I would have kind of leaned back.”

Dieden said he decided to pursue a solo career after seeing the response to his 2020 song “Better Drugs.” If it wasn’t well received, Little Hurt may not exist.

“I guess I’d probably still be The Mowgli’s,” he said. “That song definitely changed my trajectory, for sure. Or I’d be working at a CVS or something. I have no clue.”

Dieden said he just wants to write about sadness.

“I’ve always have had that in me,” he said. “With The Mowgli’s, I almost, like, contractually had to be happy, so I snuck it in there. I don't think people realize how sad a lot of those songs were, but now I can be more open about that.”

In the end, Dieden said this sound is the only sound he knows. He said he doesn’t know if he learned it, was taught it or even if he was just born with it.

“I've always been super into the idea of like, ‘This song is so depressing, but you want to listen to it in your car while you're like driving.’ I don't really know, where I learned (it). I think it's just like, everyone has their style. That's my sound.”

While the dichotomy between sad and happy fuels Dieden’s songwriting, it’s actually where Dieden grew up, in Kansas City, that truly makes Little Hurt, Little Hurt.

“I think that I'm definitely without a doubt a Midwest guy,” Dieden said. “I think Kansas City is why I'm who I am. I think in this game with all these kids in LA who are (concerned with) how they look and that's the whole thing and I'm just a kid from Kansas.

“I don't sound like it, but I just have no interest in any of that. I think that that's like a Midwest thing for sure. Also, I never like grew up wanting to be famous or be big or anything at all. I was like, skateboarding my friends in Kansas and like, somehow things happened to me. But I think that the Midwest culture definitely like, permeates through everything I’ve always done like, I'm not an LA guy. I don’t think LA has had any positive effects on me. I would say, if anything, that it has been negative, but I have to live here for my job, but like if I could move back to Kansas tomorrow, I would.”