After a close call that jeopardized its existence, UA student radio station KAMP looks to expand 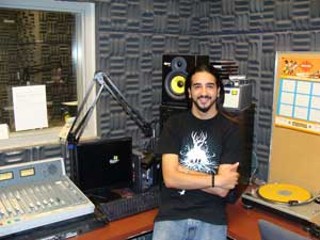 Mari Herreras
Neema Eshrati: "We're completely interactive. Our feedback is immediate and is the truest form of freedom of speech on campus. We feel we are the true face of the students."
Twenty years ago, a group of students who loved music decided the UA should have what other colleges across the country had: a student-run college radio station.

In those early days, KAMP was broadcast through a public-access cable TV channel and offered up lots of alternative music choices that corporate stations couldn't--or wouldn't--broadcast.

Today, KAMP is part of Arizona Student Media and broadcasts live over the Internet through kamp.arizona.edu. It continues its mission of offering up music and programming that other stations in Tucson can't--or won't--provide. KAMP is heavy on alternative and metal, with some hip-hop, world music, jazz, techno and, of course, sports mixed in.

The station is also broadcast on AM 1570 within a mile of campus. On-campus students can also get a listen through closed-circuit TV on Channel 20, and UATV in the dorms and at the Student Union.

Since 1998, when the station became part of Arizona Student Media, KAMP has had a secure funding source through a $1-per-semester student fee, reapproved by students every five years.

At the beginning of the 2007-2008 academic year, KAMP general manager Neema Eshrati says, the staff was well aware that the five-year funding cycle was coming to an end. Eshrati says the fee provides about $80,000 a year, and is even refundable if students don't want to give up a dollar to student radio.

"That ... has never been a significant amount of people," he says.

"In the history of KAMP, we've never gone over our budget and have always had just enough left over to add to our fund balance," Eshrati says.

Before previous five-year funding cycles, a KAMP-only referendum was presented to students in the fall, asking them to approve the $1-per-semester fee. In the fall of 2007, however, the UA's student government took a different approach by lumping KAMP into an Associated Students of the University of Arizona (ASUA) student-activities fee survey, asking students to approve student activities based on their importance.

Eshrati says it was like comparing apples and oranges: KAMP was competing with student services it had nothing in common with (like counseling and leadership programs).

The result: KAMP came in last on that survey. It looked like 20 years of on-campus student radio could be coming to an end.

KAMP's student executive board sprang into action, going before the ASUA in February 2008 to request permission to put a referendum before students in March. After the ASUA approved, KAMP did a quicker-than-usual "this is college radio and why you need it" campaign, Eshrati says.

With 3,671 votes cast, almost 64 percent of students chose to continue the previous fee structure to support the station.

"We were relieved," Eshrati says.

While the fight to keep the funding seemed to be over, Eshrati was told there was one more step: In June, Eshrati, along with UA vice president of student affairs Melissa Vito, had to go before the Arizona Board of Regents' tuition committee to ask the regents to approve the fee. Regents have to approve all tuition increases and students fees, even if approved through a student referendum.

It wasn't until August that the fee was finally approved by the full Board of Regents. Once approved, funding was already compromised for this fall, because of the delay in the referendum from fall to spring.

Despite the delay, Eshrati says KAMP isn't in a panic, because the station has that rainy-day fund for times like this. He says the station's future goals remain on the table, especially the plan to apply for and purchase an FM tower permit.

As part of the effort to get that elusive permit--which would greatly expand the station's potential audience--KAMP has worked hard to make sure that all of the station's on-air personalities keep their potty mouths at home.

Like other stations, KAMP is regulated through the Federal Communications Commission. Fifteen years ago, a student DJ aired vulgarities during a show, putting the station on the radar of the FCC--the same body that will need to approve the FM permit. Therefore, for the last 15 years, Eshrati says, the station has worked hard to make sure that students can express any opinion on the air--without cursing.

Eshrati, however, will not be around if and when the station goes FM; the psychology senior says he plans to graduate well before that happens. However, he says the experience of working in college radio has changed his life.

"I'm the son of two immigrants from Iran," Eshrati explains. "(Before working at KAMP), I got most of my music from MTV. In my house, my parents played Persian music and jazz, because my father loves jazz."

Working at KAMP exposed Eshrati to a wider world of music, and it helped him find a special home on campus of students who love music and the abilities that radio provides.

"For us, we're completely interactive," he says. "Our feedback is immediate and is the truest form of freedom of speech on campus. We feel we are the true face of the students."