Listen to Her Heart: Jenny Lewis

Art and life intertwine on her brilliant new album 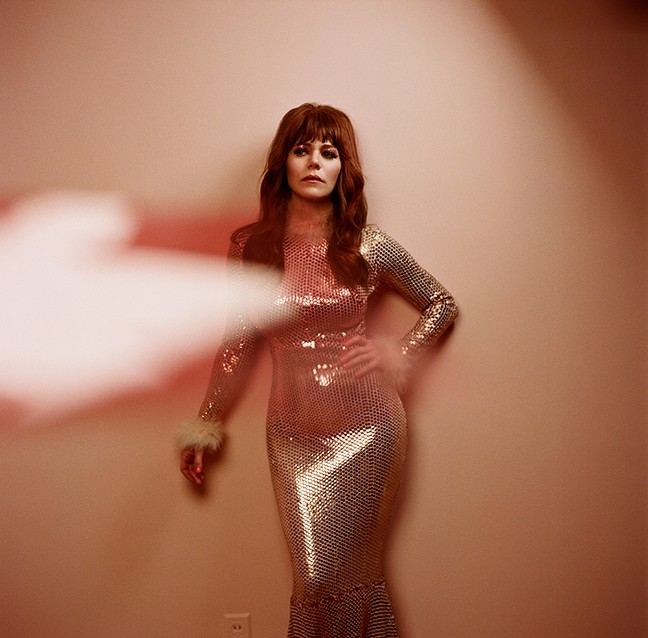 The California singer-songwriter's fourth solo album draws on both experiences, but also plenty more. It's a chapter of her life, of her career, and On The Line finds Lewis exploring moments and themes that are both big and small, serious and fun, her songwriting voice stronger than ever.

"I just create art, constantly, every day, in one form or another, so nothing is off limits," she says. "Art is soothing and cathartic and almost addictive. When I'm feeling off in my body, or uncomfortable in my skin, I sit down at the piano, use it is a tool in some ways. It can be dangerous, because life is art and vice versa."

Lewis says her songwriting process is seamless, with no clear indication at the time what marks the start of a new record or exactly how the songs will fit together later.

"When I finish a record I start writing the next one, or it overlaps," she says. "So I didn't really know what the album was until I wrote 'Heads Gonna Roll' about two years into the process and that led me to the rest."

Lewis points to some particular lines—"Even though we were just friends / I think of us as bookends / And I'm gonna love you 'til I die"—that let her see more than just the breakup, and how beginnings, endings and love itself can't be so easily understood.

"That really set the tone for me, in context of feeling like a breakup record at that time. But it really took on a different feeling with that lyric, which is really an indicator of a beginning rather than an ending. That song is way more open," she says. "I love a layered, coded lyric, something that means so many things."

Another "point of demarcation" in her life that found its way through to the record was her mother's death, and the long overdue reconciliation that occurred alongside the illness. Lewis wrote "Little White Dove" in bits and pieces, going back and forth from her home to the hospital. The song both captures that time for Lewis and, now, let's her see it from another perspective.

"When life and your work are continuous and parallel, sometimes I experience it through the song later," she says. "When you're going through that experience, so heavy and mystical, you're checked in but also checked out. The song in retrospect takes me back through that feeling. But you live and you work and definitely every aspect of life makes it into my songs."

And just as the record isn't entirely a breakup album, or entirely centered on the relationship with her mother, the individual songs themselves aren't always clearly about any one thing, but about how they come together.

"One song for me doesn't determine the direction, it's a collection. I'll write 15 songs and pick 10 or 11," she says. "I'll take body parts, something from one song and throw the rest away, steal the best part and put it in something that's better. It's a process of shuffling ideas and melodies."

Those ideas and melodies get expanded further when it comes to recording. In classic Los Angeles style, Lewis recorded at Capitol Records, studio B, in Hollywood. She recorded vocals in a booth built for Frank Sinatra. The band included legends Benmont Tench, Don Was, Jim Keltner and Ringo Starr, the two drummers playing together on the album's first single, "Red Bull & Hennessy."

"'Red Bull & Hennessy' had been kicking around in my live band for a while, but I didn't know what it was," Lewis says. "I had a version with my band that I put together for the Voyager tour and it was just called 'Red Bull & Hennessy' to put something on the set list. I wasn't going to call it that, but then I cut a version in Jamaica with a band from Kingston and then I did another version of it and then finally the version that ended up on the record has double drums on it, with Ringo and Jim Keltner. That train sound made the song what it was."

Lewis considers herself at her core to be a singer-songwriter, so collaborating helps bring the songs to life.

"I'm just trying to learn and pick up some of the secrets of playing music and living and being around a little bit of that magic is really inspiring," she says. "I really just tried to absorb the feeling and not seek out too much and not feel too self-conscious around the best musicians, arguably some of the best musicians in the history of rock 'n' roll, who played on so many of my favorite songs."

The album proceeded more or less chronologically for Lewis. By the time she got to what became the title track, the second to last on the album, there's a clear sense of progression. The song's refrain, repeated over ringing piano chords, "Listen to my heart beating," is sung with a calm strength that would fit perfectly at the happy ending of a movie.

"It just all fell into place. One thing led to the next to the next and it happened just in a timeline. By the time I got to writing 'On The Line,' the song, I needed an album title and I always title albums after songs. On The Line is perfect, that says the whole thing right there. That's where I'm at."

Now that the writing and recording parts of the process are done, Lewis is excited to share the music. On The Line has garnered rave reviews, but it's those on-stage, night-to-night moments with the crowds that matter the most to Lewis.

"It's so exciting to watch people absorb new material and then start responding to it. When you start out the cycle no one knows the album yet, so the response is tepid. But as people grow and spend more time with the songs, they're feeling it while I'm feeling it, so it's fun to observe that progression," she says. "I can feel when it clicks and that's the best moment you can hope for as a songwriter."