Light In The Dark

A fire may have damaged Govinda’s temple, but their spirits and hopes burn bright 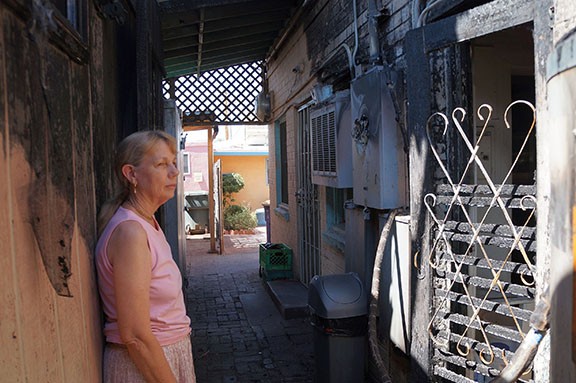 On the night of Tuesday, July 2, diners at Govinda's found their communal meal interrupted by a cook yelling "Fire! Fire!"

The diners safely escaped the danger and within minutes, Tucson firefighters were hard at work extinguishing the flames. At first, everyone thought that the fire started in the kitchen, but it turns out the blaze barely touched the interior.

It appears the fire was caused by a couple of guys working on cars at an auto shop next door, who somehow sparked a blaze in an oily area and ignited a fast-moving fire that extended to Govinda's. The outside storage shed is in complete ruins, gutted and charred, while a wall that houses Govinda's electricity and gas has been devastated. The result is a kitchen, cafeteria and temple without lights or air conditioning. The fire damaged the water tank as well, so the whole complex is without hot water. Luckily, everyone escaped without injury. The residents in the small apartment upstairs from the restaurant are safe as well, although their home is too damaged for them to live there.

In the wake of such a misfortune, Govinda founder and operations manager Sandamini Devi is working with the temple's monks and dedicated patrons to get the kitchen back up and running.

Devi moved to Tucson in 1987 from San Diego, where she ran a Krishna church near a popular beach. Unfortunately, the temple was the object of drunken vandalism and bigoted graffiti. She wanted to relocate to a place that was more tolerant and less touristy. In her hunt for a new home, Devi fell in love with Tucson.

At the time, that midtown area was a bit of a dusty nothing, so setting up a devotional temple went virtually unnoticed. It didn't take long for Govinda's to acquire a loyal and growing following. In 1992, as an extension of the temple, Devi opened a vegetarian buffet restaurant featuring deliciously uncomplicated cuisine that allowed the richness of the ingredients and spices speak for themselves. Recently, Govinda's introduced Vegan Fridays, which has become wildly popular as the vegan lifestyle blossoms.

My wife and I live close enough to Govinda's that we can hear the caws of their peacocks pierce the evening air as we settle on our patio at night. I am an occasional visitor to the lunch buffet, so it was tough to see the once-vibrant sanctuary for worship and nourishment so dark and silent. But I was heartened by the community's response to this disaster. Tucsonans have been donating furniture, bringing food and flowers, volunteering to help with the clean-up, opening up their homes and contributing financially.

Finances are the big issue. Devi says her insurance company is offering far less than what she estimates it will cost her to repair the damage, get back up to code and return to a fully operational restaurant. Because of the financial shortfall, she has set up a fundraising account through PayPal, paypal.me/iskcontucson, which is just now starting to help.

Despite the darkness of her situation, Devi sees only the flicker of hope. She's confident she'll be serving food again by August, which is not that far away. After seeing the damage, I was skeptical about her optimism. The circuit-breaker is straight-up melted and the firefighters had to bash in walls to be sure that the fire wasn't spreading even further. Put simply: The back space of Govinda's was a mess last week.

Devi just looked at me with a wide smile and assured that before Krishna's Sept. 3 birthday, Govinda's will be feeding us once again. That's good news. Because I miss their lentil soup. It is divine. ■