UA anesthesiology prof under fire for past anti-gay comments 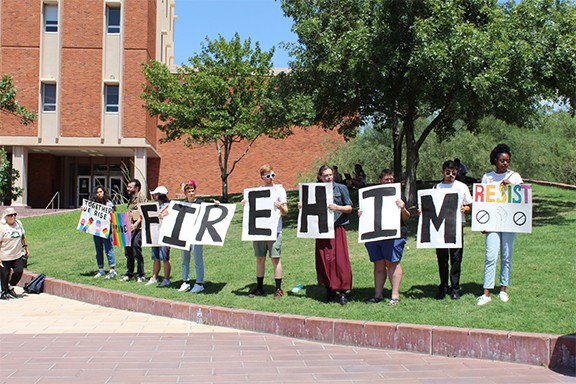 Kathleen B. Kunz
UA students gather to protest Dr. Randal Dull’s continued employment.
It turns out that publicly dismissing the LGBT community as a collection of "perverts" and "degenerates" might not be great for your professional career.

Or at least that's what Dr. Randal Dull, an internationally recognized anesthesiologist who joined the UA College of Medicine's Department of Anesthesiology last summer, is learning. Dull has become the target of protests after an anti-gay letter he penned more than a decade ago to the local newspaper in Park City, Utah, resurfaced and was circulated online.

Dull's letter bashed The Park Record for running a story about a local LGBTQ-friendly lounge. Referring to the gay community as "perverts" and "degenerates," Dull wrote that elected officials failed to maintain "family values" within the city by allowing the lounge to exist on Main Street.

"Good people have allowed themselves to be deceived by the brainwashing use of words like 'tolerance' and 'diversity'—which are nothing more than polite ways of asking us to abandon our principles," he wrote. "Those who wish to undermine the Christian heritage of our country do so to destroy the only real resistance to this open promotion of perversion and radical liberalism."

When he wrote the letter, Dull was working as an anesthesiology director at the University of Utah.

Dull was chair of the UA Department of Anesthesiology until Aug. 16, when he quietly stepped down after the letter gained attention. In addition to heading the department, Dull also represented the university as a senior editor of Anesthesia & Analgesia, the peer-reviewed journal of the International Anesthesia Research Society.

He joined the UA in July 2018, after leading an anesthesiology research program at the University of Illinois at Chicago. He continues to work as a tenured professor and practicing doctor at Banner University Medical Center, located at 1625 N. Campbell Ave.

Dr. Irving Kron, interim dean of the College of Medicine, and Dr. Michael Dake, senior vice president of UA Health Sciences (who is currently involved in an ethics scandal of his own), announced the change in a press release last month, stating it was necessary "to preserve unity in the pursuit of our mission."

Without naming the criticisms against Dull directly, the two wrote: "When issues and concerns arise that could be detrimental to our mission of providing cutting-edge health education, research, patient care and community outreach services, it impacts our ability to best serve our students, our patients and the community at large."

Student activists assembled in the heat of mid-day last Wednesday, Sept. 4, at the university's "Free Speech Zone" in front of the administration building. They spoke about pervasive homophobia and transphobia within higher education, and demanded that Dull be fired for his letter and treatment of subordinate employees.

"We want Dr. Dull fired for his comments. What he said is reprehensible, it's disgusting, it's hate speech and we don't want it here on our campus," said Riley Conklin, a member of Queers United Coalition, a group of queer and trans students at the university.

Queers United Coalition released a statement indicating they are grateful that his position as chair was rescinded, but it doesn't go far enough to protect LGTBQ+ students and community members from discrimination on campus.

"We can say with confidence that we would not feel safe handing our medical care or the care of our loved ones over to this man," their statement says. "For him to continue practicing medicine at Banner Hospital is more than worrying, it is deeply upsetting and dangerous. If your professor despises who you are, both your learning and safety are threatened.

The UA's Health Sciences communications team released the following statement from Dull himself.

"I apologize unequivocally for the hurtful way I addressed an issue 15 years ago about which people have very sincerely held thoughts and feelings," Dull wrote. "I recognize that it's an honor and a privilege to serve as an educator and physician, and I am committed to the values and vision of the University of Arizona and Banner University Medical Center. I always have and will continue to train medical students and residents to provide equitable, compassionate care, and to serve every person and every patient I encounter with dignity and respect."

Representatives from Banner UMC clarified that while Dull is on the medical staff at their hospital, he is not employed by the organization. They also released a statement after the protests against Dull, but did not comment on the allegations directly.

"At Banner Health, we value equity, diversity and inclusion, and provide the very best care to every patient, regardless of their country of origin, race, religious beliefs, sex, sexual orientation or gender identity," their statement reads. "Everyone who walks through our doors is treated with compassion, dignity and respect."

On Sept. 3, the College of Medicine appointed Dr. Jerry McCoy as interim chair of the Department of Anesthesiology. According to a press release, McCoy has more than 25 years of clinical experience as an anesthesiologist. He served as chief of staff at Oro Valley Hospital from 2010 to 2012 and also was an assistant professor of clinical anesthesiology and critical care at UA from 1999 to 2005.