Big Freedia is bringing her dance party to Tucson 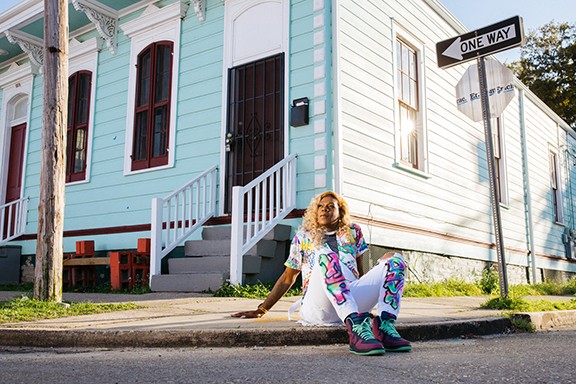 8 p.m., Friday, Nov. 22
The Rialto Theatre, 318 E. Congress St.
$26
rialtotheatre.com
For those in the know, bounce music is a subgenre of hip-hop that was born in New Orleans in the late '80s, though it really saw its popularity rise in the '90s thanks to artists such as DJ Jubilee, Partners-N-Crime and the sadly deceased Magnolia Shorty. It's fun, energetic, and often blessed with sexually suggestive, if not explicit, lyrics. Bounce is also known for its call and response-style lyrical structure.

The music had, for the most part, remained in the underground for years until Big Freedia took the bull by the horns and dragged it into the mainstream. Also an icon for the LGBTQ community, Freedia herself describes bounce as, "uptempo and heavy bass, call and response type music, and it has a lot to do with the shaking of ass."

It's been over a year since the 3rd Ward Bounce EP was released, her third EP complimenting her three studio albums (the most recent being 2014's Just Be Free). The title refers to the New Orleans district that includes the Melpomene Projects that she grew up in. The response to that EP has been largely positive, though Big Freedia really has to be seen in the live environment in order to really get the full experience.

"A lot of people really enjoyed the EP," she says. "I didn't have any complaints. Everybody seems to be enjoying it when I'm performing it live in concert, so no complaints from me at all."

The EP includes an explosive collaboration with singer, rapper and songwriter Lizzo called "Karaoke," that features the damning lyrics, "Gotta bury your bad boss/With ample amount of time/'Bouta hit 'em with bandeaus that cook the pop off, Give a fuck about landlords when we some outlaws, Baby, you can get Randolph or nigga knockoff." Take that, bosses and landlords.

"It was amazing," Freedia says of the collab. "Lizzo and I have been friends for a while, and just to be able to do a song together felt really good and hopefully we'll do another. We did do two—one was supposed to be for her record and I'm not sure what's going on with that. But yeah, we've done two songs together thus far and waiting on another maybe."

Freedia has also been on tour recently with another highly acclaimed New Orleans act, Tank & the Bangas. The funk-soul-rap fusion group opened for Freedia, and they were delighted about it when speaking to this writer recently.

"I love being on tour with Big Freedia," said singer Tank Ball. "It's intense. It's hard to go on before or after Big Freedia because we're both such New Orleans people that we both are big entertainers. So it's a lot of energy. The last time we went on tour, everybody got on stage all together, choir robes and big old gospel songs. It was amazing."

The enthusiasm runs both ways.

"Before they blew up, they were a band I took on the road to get them some exposure," Freedia says. "I'm very much a fan of Tank and the Bangas. They're an amazing group of New Orleans talent and I support them 100. We have some amazing talent here in New Orleans. It's fun when you get to tour with different people that represent the same hometown. We all just have a great time, put out a lot of work, and we get a great response when we work hard."

Big Freedia's story is a fascinating and impressive one. She didn't jump on a bandwagon—it's not as if the charts were overflowing with bounce music when she emerged. She also didn't create something new, but she took the music she loved and stuck to her guns. That's pretty much been the story of her career.

Outspoken artists such as Freedia are particularly important right now, when members of the LGBTQ community constantly feel under attack under the rule of the administration. Simply by existing, by not hiding, and by thriving, Freedia is winning and offering a beacon of hope to many.

"I give a lot of people hope and I give a lot of people inspiration to know that, whatever you're going through, whatever the situation, there's still another side to it," she says. "Just my story alone, and still my journey, the ups and downs of everyday living, people can hear it in my music and my fans relate to me. It's definitely important for artists like myself to get out there and do what we need to do."

Those fans can marinade in all of that thanks to the aforementioned 3rd Ward Bounce EP, though it's been five years since the Just Be Free full album. Freedia says that's a tactical decision.

"Mostly, everybody's doing EPs and singles and stuff," she says. "Full length is OK but the world right now, in the digital world, is EPs. I'll be doing EPs, and there may be a full album later. There's always enough songs for a full album in the can. So it's just about what's popping in the music world at the time. A lot of the time, EPs have a short run but they're powerful and they get the message across."

Regardless of the format, we'll get to enjoy the songs live, as they were really intended, when Freedia hits the Rialto on November 22. She's excited.

"I think it's going to be a blast when I come back," she says. "You can expect lots of fun times, lots of ass-shaking. Feeling the vibe. We're just going to have a good time. We're going to let our hair down, party and represent."