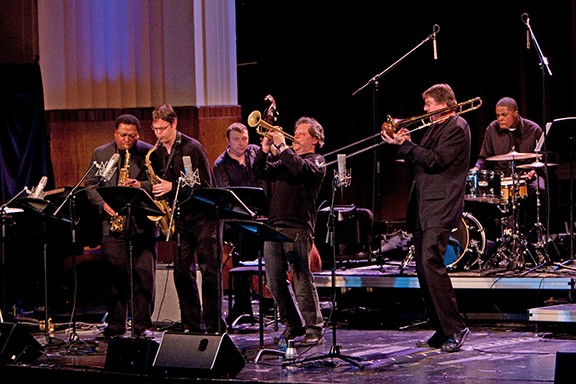 It's been almost exactly 39 years since jazz great Charles Mingus left this plane of existence, but there are numerous of groups of musicians, not to mentions fans, who continue to ensure that his work, his legacy, remains alive and well. The Mingus Dynasty, founded by Mingus' widow Susan in 1979, is one such group.

The bassist and current musical director is Boris Kozlov, who told us that Sue Mingus put together a core group of Mingus alumni back then.

"Initially, she had Dannie Richmond, George Adams and all the guys who played in the '70s with him," says Kozlov. "I think she added Charlie Haden on bass and Randy Brecker on trumpet who was on some studio dates for Mingus in the '70s. So that was pretty much the beginning of the Dynasty. A bunch of people went through it, including a bunch of younger musicians like Craig Handy, who wound up being the musical director for the Mingus Big Band, which was to come in 1991."

The Big Band was a '90s venture and another idea conceived by Sue Mingus to pay tribute to her husband, according to Kozlov. Charles always wanted to assemble a big band but could never afford it. After his death, when his music experienced a resurgence, the opportunity was there, and it proved to be extremely popular. As a result, The Mingus Dynasty was put to one side for a while. It was during the Big Band era that Kozlov came into the picture. 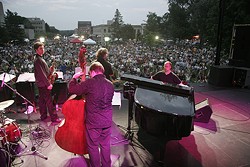 Paul Sabin
The Mingus Dynasty at the Iowa City Jazz Festival, in July 2006.

"I think the resurrection of the Dynasty came maybe in 2005/6," he says. "The reasons were practical. Our European booking agent realized that there was a market for the Mingus ensemble at the festivals in Europe but not in the form of Big Band because a lot of people couldn't afford that anymore. We had a fair amount of gigs on the road in Europe. We went to Israel, Turkey, all over the States. Now the current batch of cats who are the mainstay in the Big Band, they also do the Dynasty. I happen to be the musical director now, because I've been around his music since '98 and been studying it, arranging it and working on many different projects."

The Mingus Dynasty will bring Charles' music to the Tucson Jazz Festival, and it will be wonderful to hear the work of one of jazz's all-time greats, performed by people that are so close to the family. Still, when asked to describe the Mingus Dynasty live experience, Kozlov is mildly coy before he starts to get excited.

"Talking about music is like dancing about architecture," the bassist says. "On this run, not only because of the places we're going to geographically, but also because it's the 60th anniversary of the recording of Tijuana Moods, we concentrate on that. It's a strange album in many ways. First of all, there are only five tunes on it, and they included some alternate takes. Not only that, it was also one of the true early fusion records. If you think about Dizzy Gillespie and Chano Pozo, stuff like that, he was right up there. Mingus took some Mexican rhythms, some flamenco rhythms and tried to marry it with jazz. It was 1957 that they recorded that, but somehow it didn't come out until 1962. We're celebrating this record, so we're playing stuff like 'Tijuana Gift Shop,' and 'Ysabel's Table Dance,' plus a tribute to Dizzy Gillespie called 'Dizzy Moods.' Dizzy would have been 100 years old this year, so we're marking that."

Kozlov is looking forward to coming back to Tucson, citing the college flair and downtown streetcar as attractions. As for the festival, he says that a crowd is a crowd, whether they're outside or in, just so long as their listening. But the band will be giving its all.

"You can expect earth, wind and fire, and whatever other elements are out there," Kozlov says. "The entire system of chemical elements is in the Mingus music. You have to be really either uninterested or not capable to not introduce all those elements to the audience. All of it is built in. So we're expecting to bring that full table of chemical elements to every performance on the tour ever."

Just before the conversation ends, we ask Kozlov what he thinks Mingus would make of the Dynasty band and the fact that people are still playing his music all these years after his death. After all, Mingus had a notorious temper.

"I think he would have the same reaction he had with his band," Kozlov says. "He would come and hear us and fire all of us and next week be making phone calls with apologies, and then he'd probably find some good in it. I think one of the reasons there's a lot of life in it is not only because of Sue Mingus' efforts over the years and enormous time and love that she puts into it, but also because this music is very much alive. It's not like we're trying to mimic what he did. The music has not only all those chemical elements, it also has built-in potential for being modern for years and years to come. We're not playing this music as Mingus would have played it. We truly feel like, if we were doing that, lightning would strike us. It's a great vehicle for any young, modern jazz musician for his expression. That's what keeps it alive. If we were to try to emulate Mingus' sound, the whole thing would be dead pretty soon. Nobody wants to hear a second-rate Mingus album."