When Brenda Moreno grows up, she wants to be a scientist. If asked a year and a half ago, her answer might have been different.

Brenda, 9, is one of 280 students at Manzo Elementary School, which was nearly shut down by the Tucson Unified School District in late 2012. But as of this fall, the school is thriving and has partnered with the University of Arizona's Biosphere 2 on a program that will scale the multimillion-dollar Landscape Evolution Observatory into a kid-size, kid-friendly science experiment. The fourth-graders' version of the LEO project kicked off with a friendly competition between the boys and girls in mid-October. The small elementary school is located in crime-infested Barrio Hollywood just west of Interstate 10. About 90 percent of its students come from low-income families and qualify for the school's free and reduced-cost lunch program. About 30 percent of families in Barrio Hollywood fall below the poverty rate.

The school district, in an effort to close a $17 million deficit in 2012, sought to close schools with an academic rating of a D or lower. Because Manzo suffered from low enrollment and a D- grade, it seemed practical for the school to be absorbed into a larger school.

"The footprint of our facility wasn't built to hold 500 students, so we were at a disadvantage from the beginning," school counselor Moses Thompson said. "There was another school who was under enrolled so it made sense that we would be that missing puzzle piece."

Thompson, who has been at Manzo for seven years, has seen his students struggle with learning and he remembers a time when there appeared to be no way out.

"We had low test scores across the board, which was also coupled with a low enrollment rate that worried the school board," Thompson said. "It honestly seemed like we might have been done for."

"The problem wasn't that they didn't have good programs in place," said Adelita Grijalva, the president of the TUSD governing board. "The problem was that they weren't set up for achievement."

While all of this was happening in Barrio Hollywood, 33 miles away at Biosphere 2, challenges were also brewing.

The LEO project, Biosphere 2's signature experiment, was struggling to live up to expectations.

The enormous steel structures that comprise the LEO hill slopes sit in the former agricultural biome at Biosphere 2, occupying roughly the same space as a football field. Each of the three lime-green hill slopes is the size of a basketball court, only tipped 10 degrees. Building the project resembled the painstaking process of building a ship in a bottle.

Each hill slope, packed with crushed volcanic rock and lava fragments known as tephra, is equipped with its own specially made rainwater system. The system is designed to produce rainfall simulations, ranging from steady rain to sporadic, to show how the hill slopes react to multiple conditions. Researchers will then be able to study how water, energy and carbon move through each hill slope. In addition, researchers will monitor the water, chemistry and biology, collecting data on how Earth systems evolve and affect each other by using almost 2,000 sensors placed in the tephra.

The half-acre experiment, which is the biggest Earth-science project ever built, cost $7.5 million and took about a year to complete. The project officially started in 2011, when construction of the first hill slope started, and is expected to last 10 years. Results of the project will help researchers understand how climate change will affect Earth's natural systems.

But momentum for LEO had slowed.

"The original idea for LEO was for it to be a three-pronged outlet for everybody," former lead scientist Stephen DeLong said. "We wanted it to utilize research, be used for education and start outreach programs to different places in the city."

But that wasn't happening. LEO wasn't reaching out for citywide education and was making slow progress, he said. For the most part, it wasn't meeting any of its goals, which didn't sit well with DeLong given that LEO was supposed to be a focal point of Biosphere 2.

"Over time, it just stopped being what we thought it could be," DeLong said, noting that the funds that were given to Biosphere 2 were inadequate. "The initial thought was that we had enough money to give LEO a really strong launch, but a lot of it had to be spread to other research. We thought the money would go further."

With LEO's funding deteriorating and the realization that the project wasn't achieving its goals, DeLong left the project in January 2013 for a job with the U.S. Geological Survey in California.

Kevin Bonine, Biosphere 2's director of education and outreach, came onboard LEO as DeLong was leaving. Bonine agrees that funding has been tough to come by, but says it should be more plentiful as LEO generates data.

"It's been a challenge to fund this," he said. "We are hoping that money will start to come in once more data comes out."

As difficulties mounted for both LEO and Manzo Elementary School, it seemed as though both were hitting dead ends. One was being criticized for lack of focus; the other was on the verge of being shut down.

In 2010, the school teamed with the UA School of Geography and Development to help students learn about gardening. That helped students become excited about their schoolwork and the school's overall test scores began to improve. But scores in math and science were still weak.

"We needed those two subjects to be pushed, and that's when we decided that we should have our students concentrate on experimental science," Thompson said. "So we started working even more with the university."

Michelle Coe, a UA graduate student, was working on the UA Community and School Garden Program with Sallie Marston, a professor with the School of Geography and Development, when the two decided that something needed to be done to help Manzo. They sought the help of Greg Barron-Gafford, a UA assistant professor and an associate research scientist at Biosphere 2, and Coe applied for and received a NASA Space Grant Fellowship to help fund her research and to oversee the Manzo project.

Along with Thompson, they decided that the Manzo students should experiment with a scaled-down version of Biosphere 2's LEO project because of the amount of math that goes into the science involved.

In addition, all agreed that students in the fourth-grade class would be at the best age to test the new experiment. Because Manzo has grades K-5, choosing fourth-graders would ensure that participants were academically advanced enough to handle the work, and also give them a year to see the results of their work, according to Thompson.

"The combination of having kids that are interested in science and us at Biosphere 2 really wanting to find a way to translate our work to the public just seemed logical," Barron-Gafford said. "These students show up and you can tell not only are they loving it, but they are learning."

Coe, who has been working with Manzo students for about a year, says there has been a change in the way the students view learning.

"The best part is being able to see this group of fourth-graders learn by getting their hands dirty," Coe said, "and they have become even more excited about science with the building of their little LEOs."

The responsibility for ensuring a proper re-creation of the LEO hill slopes fell upon Abreeza Zegeer, the UA's greenhouse manager and a research specialist. Zegeer engineered the little LEOs with measurements scaled down from the full-sized hill slopes at Biosphere 2. And to ensure that data would be viable, Zegeer also spent time using a solar radiometer to make sure that the same amount of sunlight was coming through the windows of the Manzo greenhouse as at Biosphere 2.

"I really had to realize that you can't take anything for granted. You have to spell out every single step because it is complicated work," Zegeer said. "It can be hard for adults to understand it, which just shows (how well) these kids are doing."

Barron-Gafford invited Zegeer, whose position at the univesity was cut to half time earlier this year, to help navigate the complexities of scaling down the massive LEO hill slopes.

"I was asked to come on and help and it truly was the best thing that could have ever happened for me," Zegeer said. When you see how excited and happy they are to be doing science, it just shows that this is the way kids are supposed to be learning." Zegeer's measurements came into play on Oct. 15, when it was time for the Manzo students to build their replicas.

The fourth-graders were separated into two groups, boys against girls, and they raced to see who could assemble their little LEOs the fastest.

While some hammered pieces of wood together, others fastened screws or tried to distract the other team with taunts.

After an hour of work, the boys and girls were neck and neck. Sweat dripped from foreheads as members of both teams yelled at one another to move faster. As the race drew to a close, one member from each team was fastening the last of the screws. Two of the boys kicked up dirt as they stomped excitedly, cheering on their teammate to the finish line.

With Barron-Gafford and Zegeer directing traffic, the students took their places around the LEOs and lifted their creations, pride beaming from their young faces. Gingerly, the two teams inched their little LEOs into the humid greenhouse.

Brenda Moreno, who has attended Manzo since kindergarten along with many of her cousins, says she's had a much easier time with learning since the school took the curriculum outside.

"I really like working in the garden and greenhouse," Brenda said. "I think I learn better when I'm out with the LEOs. Everything about science is really interesting."

Manzo hopes to see more of such positive results in the next couple of months, Barron-Gafford said.

"What Moses and those students are doing is just remarkable," he said. "LEO was kind of in this weird rut before we started this outreach with Manzo. The point all along was to teach people and we are finally doing it the right way."

Biosphere 2 is hoping to team up with more local schools, according to Bonine.

"The Manzo partnership is the first time mini-LEOs have been used ... offsite with school children," he said in an email. "We look forward to many more such innovative and educational collaborations."

Although the partnership between Biosphere 2 and Manzo Elementary School is an experiment, there is hope among TUSD officials that such links can spread to the rest of the district, said Grijalva, the board president.

"There are a lot of parts to these programs, but it seems to be working well for this school," she said. "It is too early to tell if we could implement it to the rest of the district, but if it achieves its goal at Manzo then I can see it going places."

The students at Manzo couldn't be more excited, Thompson said.

"This startup program that we have has changed the lives of these students," he said. "I'm just glad that we are giving these kids a chance."

Manzo Elementary School, in part with their scaled-down experiment of Biosphere 2's LEO project, planted a variety of seeds on their miniature hillslopes. The seeds were picked out by Manzo school counselor Moses Thompson, with the idea of choosing plants that are regionally important. The data collected by the Manzo students will be used for research at Biosphere 2.

The Weekly List: 25 Things To Do In Tucson In The Next Week

Barrio Hollywood: If You Don't Live in the Barrio, You're Not Allowed to Vote in Our Neighborhood Association 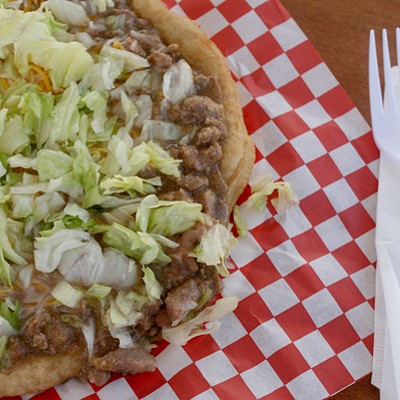