Finlayson and Guilmette are the plaintiffs in one of the civil cases against Blute. In his response filed in the case, Blute says he was the chairman of the department of obstetrics and gynecology at Tucson Medical Center from 1983-1985 and the chief of staff from 1988-1989.

However, he denies that he was an employee of TMC “during the relevant time period,” and that “he operated his own private practice and had privileges to provide care and treatment to patients at Tucson Medical Center,” according to his response.

“It is a gross betrayal of the trust that a patient puts in her doctor. It is an absolute perversion of the practice of medicine,” Sethi said. “The hubris of a doctor to impregnate his own patient, in some effort to either save money or populate the world with his offspring, is striking.”


In 1982, Guilmette decided to receive artificial insemination treatments, desiring children with her then-husband who had a vasectomy.

She went to Blute, who promised her she would be inseminated with sperm from a Hispanic donor to replicate the ethnicity of her husband.

In 1983, she had her first son, Aaron. She sought fertility treatments from Blute again a year later and gave birth to Finlayson in 1985.

Guilmette said she initially canceled the appointment that resulted in Finlayson’s conception because she had to work, but Blute called her with news he had sperm from a Hispanic donor, and she went in to receive the treatment.

“When I went in six weeks postpartum, I questioned him and I said, ‘How come my kids don't look like Mexicans?’ And he says, 'Well, you have two more kids for them to look like Mexicans.' I believed him, but that's not true,” Guilmette said.

Having believed she was of 50% Hispanic descent her whole life, the DNA test told Finlayson she’s 87% Irish.

“In high school, because my dad didn't teach me Spanish, I went all the way up to AP Spanish...I was pretty fluent in Spanish because I wanted to connect more with my dad's family,” she said. “I'm sad, but I'm more pissed than anything. It's happening all the time, and there are so many cases out now. These doctors thought they were going to get away with it. I'm never going to understand why. It's hard, especially with my dad being dead."

Guilmette received three total fertility treatments from Blute resulting in two pregnancies carried to term. Each time, she handed him $50 in cash to pay the sperm donors.

“I do not remember a receptionist. Nobody ever came into the room with you like is required now,” Guilmette said. “But it was $50 a shot and I did it three times.”

According to Finlayson, the half-brother who advised her to look at her birth certificate shared a similar story. His mother had sought fertility treatments with sperm from European Jewish descent, but the half-brother’s DNA tests revealed the sperm was likely Blute’s.

Popular DNA testing kits such as Ancestry and 23andMe only show their users’ familial relations with others who have taken the same test. Out of those who have taken the DNA tests, Finlayson has found 10 half-siblings, the latest being a half-sister born in 1975.

She says one of the half-siblings includes Randall Blute, James Blute’s biological son.

When Blute’s sons, who were conceived from his past marriage, heard Finlayson and Guilmette’s story first reported by Lupita Murillo of KVOA News 4 Tucson, their attorney provided the following statement to the news station:

“I represent the estranged biological children of Dr. James Blute from a previous marriage. My clients have had no meaningful contact with Dr. Blute in approximately 30 years—since he and their mother were divorced. They have just become aware of the appalling allegations being made against Dr. Blute. They want to express their support for all of the victims who have been impacted by Dr. Blute's alleged actions. They have asked that the media please respect their privacy at this time."

“It took a while for my mom to find a lawyer because this was unheard of in Arizona,” Finlayson said. “I mean, it took probably a month after calling, and finally Dev, thank God, he took it without knowing what's going to happen. I mean, it's all up in the air.”

Guilmette said, “People just wanted to stay 10 feet away from it, and I don't blame them. But he's got to be held accountable.”

“The reality is this is cutting edge stuff, the law has not caught up with the science in this area. When Blute was doing this in the 1980s, nobody could have conceived that you could go to a drugstore and pick up an over-the-counter DNA test." -Dev Sethi

Their attorney, Dev Sethi, says once Blute enters in appearance, they’ll push for a jury trial.

“The reality is this is cutting edge stuff, the law has not caught up with the science in this area. When Blute was doing this in the 1980s, nobody could have conceived that you could go to a drugstore and pick up an over-the-counter DNA test,” Sethi said. “Blute, I'm sure, never feared being caught. And now technology has allowed people to learn so much about their histories and so much about their lives, just with a kind of do-it-at-home test. And that's what's revealed this horror show.”

Blute filed a response on Dec. 9. He said he provided artificial insemination services from “anonymously sourced, third party donors.” He denied the allegation that the sperm artificially inseminated into Guilmette was not from an anonymous Hispanic donor.

Blute also denied it was his practice to use his own sperm in administering fertility treatments.

In the response to the claims against him, Blute’s attorney Michele Thompson wrote, “Dr. Blute himself was a semen donor through the University Medical Center’s Department of Obstetrics & Gynecology and he followed their protocols in existence at the time.”

“His deceitfulness knows no bounds. It's narcissistic, something needs to happen to him,” Finlayson said. “For him to deny this at all, it's just inconceivable.”

On Dec. 1, Finlayson and Guilmette won a motion filed by the defendants’ to remove Finlayson from the case on the grounds that she wasn’t alive at the time of the alleged acts.

“Blute denies it, of course he's going to. But we're trying to get to a jury trial,” Finlayson said. “TMC and Blute all have to file these motions for dismissal before we can even get there. So it's a blessing that we won that case, but Dev said that it's still an uphill battle.”

TMC Communication Specialist Angela Pittenger wrote in an emailed statement that the hospital could not comment on the merits of the lawsuit.

“As this is an active lawsuit, TMC cannot comment other than to confirm that Dr. James Blute III was not an employee of TMC, rather a member of TMC’s independent medical staff,” Pittenger said. “Dr. Blute was last part of our medical staff in 2000.”

Lisa Contreras, the regional communications director for UnitedHealthcare, said in an email, “Dr. James Blute is no longer employed with UnitedHealthcare. His role during his employment with us was purely administrative and did not involve patient care.”

As the mother and daughter continue their civil litigation against Blute, they’re relentlessly seeking justice in a state that doesn’t criminally prosecute fertility fraud claims.

“What I want most is just accountability. You did this, take responsibility for it,” Guilmette said. “It was a bad thing to do. But we'll never get that. Nobody who ever inseminates their sperm in this many women—there's no way. I mean, he's got to have an ego unbelievably big.”


“This is illicit physician inseminations, and I want to prevent this from happening in the future. That's why I'm doing this.” -Sen. Victoria Steele


But hope of justice for victims like Guilmette and Finlayson may be on the horizon. After seeing KVOA News 4’s reporting on the story, Victoria Steele, a state senator representing Legislative District 9 in Tucson, is drafting legislation to criminalize fertility fraud when the state legislature reconvenes in 2021.

“There's a deal with this kind of deception. In Arizona, it's difficult to hold doctors who do this legally responsible,” Steele said. “This is a disgusting breach of trust. But unfortunately, these cases fall through the gaps in existing civil and criminal laws that are in statute in Arizona.”

Motivated by the egregious acts detailed in Finlayson and Guilmette’s story, Steele began drafting legislation in early November. Although she says the bill isn’t yet ready for “prime time,” she hopes victims will be willing to testify if her bill receives a hearing.

“It is a huge shock for unsuspecting families who trusted their doctors to help them conceive, and then they go through these fertility treatments only to find out that their own doctor is the father of their children, and that it was done without their consent,” Steele said. “This is illicit physician inseminations, and I want to prevent this from happening in the future. That's why I'm doing this.”

Sethi commends the drafted legislation and hopes Arizona will be added to the list of states criminalizing fertility fraud.

“I think that is something that needs to be done and will hold these bad actors accountable going forward,” he said. “I suspect Blute is not the only one who's done this. Around the country, we read about these stories, and I think Arizona, which has a long history of protecting its citizens and has a long history of taking proactive steps to regulate our professions with public safety in mind, Arizona should and will be a leader in this area.”

Finlayson hopes Steele’s legislation will bring justice to past victims, as well as those to come.

“I don't care about money, I don't care about anything, I just want something to be done,” she said. “I was so excited when I heard [Steele] took an interest in our case, and I actually felt like I'm doing something that's gonna last. It's gonna help a lot of people in the future, and people that already are victims.”

As she fights for justice for victims of fertility fraud through legislation, Steele hopes those finding out their biological fathers are the very doctors their mothers’ entrusted can find peace in their identities beyond the deceit they experienced.

“This comes from my history as a mental health counselor, but who you are as a human being in this world is more about your lived experiences and what you know, and who you love than the bad things that might have been done to you,” Steele said. “I would give that same advice to a rape victim. You get to define who you are, not the person who has done bad things to you.”

As part of a growing group of victims absentmindedly taking DNA tests to find out the unthinkable, Finlayson says her best advice is to join a group of those experiencing the same thing.

“My advice is to get into a group...and you will be surprised at how many people are finding out about their real biological parents. It's nice to talk to somebody who has been going through this longer than I have,” she said. “Get into a support group, into therapy. Don't try to let it rob you. When I found out I wasn't Hispanic, as hard as it was, I'm the same person as I am. Nothing's changed.” 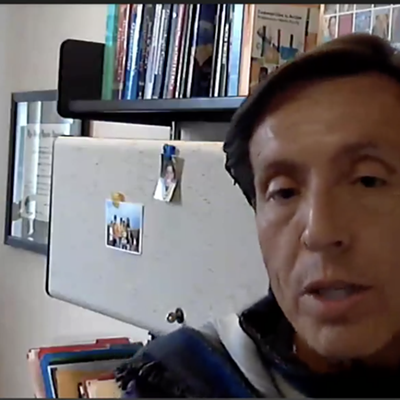 Arizona Sees Slight Reprieve in COVID-19 Cases, But Still Breaks Records for Spread of the Virus