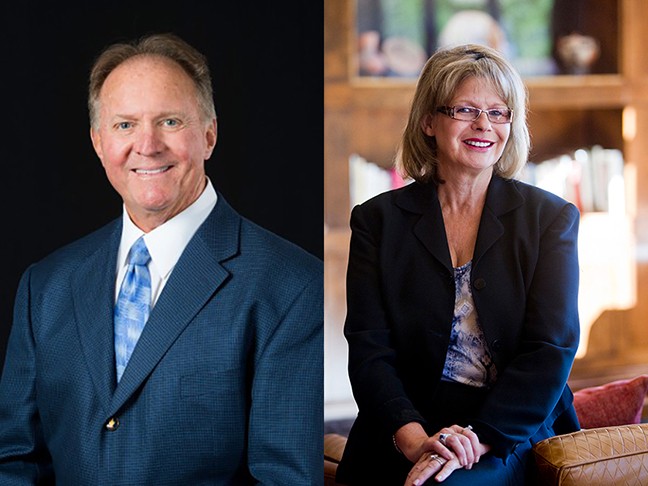 Earlier this month, Pima County Supervisor Steve Christy announced that he and Supervisor Ally Miller have withdrawn their participation in the county's Community Law Enforcement Partnership Commission and their six appointed commissioners will no longer attend the meetings. This decision follows months of disagreement within the Board of Supervisors over the commission's existence.

The CLEPC was created last year as a condition for accepting the controversial Operation Stonegarden grant, which gave $1.4 million in federal funding to the Pima County Sheriff's Department in order to promote collaborations between federal and local law enforcement. The supervisors later reversed that decision and rejected the money. Operation Stonegarden had previously been accepted by the board for 12 consecutive years.

After it was rejected the commission was retained, with Supervisor Ramón Valadez giving it a new mission to review every intergovernmental grant that comes to the board for use by the PCSD. None of the CLEPC recommendations are binding; the board still has final decision in all budgetary matters.

During a board meeting last December, Christy, who believes the CLEPC has become "political to the point of irrelevance," made a motion to dissolve that didn't garner enough votes.

"CLEPC has devolved into a soap box forum for many commissioners to attack law enforcement and the Trump administration," Christy said at the meeting. "It should be up to the sheriff, not the Board of Supervisors, to determine the fate of these grants, and in the sheriff's case, his ultimate oversight is not some biased committee or commission, it is with the voters of Pima County."

Christy points to the commission's deadlocked decisions over grants offered to the PCSD as proof of its dysfunction. He said the commission members' demands for more information and more time to deliberate were "objections designed to delay and divert."

"We do not need a commission that is clearly agenda-driven and has a strong anti-law enforcement bias," Supervisor Miller said at the December meeting. "The money being spent to conduct these meetings, to appease a few in the community, is beyond what we should be doing and I think this commission should be dissolved."

Valadez said he was troubled by the fact that the CLEPC continues to be threatened only because there's disagreement between commissioners. He and the other two Democratic supervisors defend the commission as part of necessary checks and balances in local government.

"[CLEPC] creates a dialogue, it creates a curiosity and that's how we need to treat it," he said. "That is what is the basis of our democracy, it's not about whether we can all agree."

From watching the CLEPC meetings, Christy believes Valadez' mission was not being followed, and it was instead an opportunity for commissioners to make statements against law enforcement.

"They didn't want a law enforcement presence in certain venues, particularly along the border, and then were not sticking to the mission of approving or reviewing or recommending the grants that were being offered," Christy told the Tucson Weekly. "It was an opportunity for them to make statements against law enforcement."

"When the presenters come every single commissioner is asking questions, trying to find more data, discussing these different concepts," Randall said. "And I think Steve [Christy] posits that the sheriff is the ultimate authority for public safety in Pima County. The sheriff himself has told me that he values the commission and he wants it to continue."

The Sheriff's Department said Sheriff Mark Napier was not available to comment on this article.

When the supervisors decided to not accept the Stonegarden grant, Randall said they also added a third appointee per supervisor. With a new mission and an influx of new commissioners, the group had to redo their open meetings training and elect a new chair and co-chair.

Randall, a Democrat, shares the CLEPC's leadership with Kevin McNichols, a Republican. She said there is now more bipartisanship in their meetings. Some recommendations have passed with unanimous votes.

"In this space we have people with strong opinions because they care very deeply, and we were able to unanimously agree on some things, that's really amazing," Randall said. "So it seems very disappointing that just a few days after we finally had a really cohesive meeting, that's when Supervisors Miller and Christy decided that they were going to do this."

The CLEPC only needs eight commissioners present to have a quorum, and between the three Democratic supervisors' appointees, there are nine still participating. But if just two people are missing from any meeting, the commission cannot legally conduct business.

"Supervisor Christy is on the record with the [Arizona] Daily Star that he's doing this to create barriers and I applaud his honesty but it's also very concerning to me that an elected representative would openly admit to wanting to use the parliamentary process against us," Randall said. "The formation of the commission passed, he might not have voted yes on it but it passed and for him to try to get his way anyway is deeply concerning."

Randall points to the vanished $615,000 of seized drug money from the Metropolitan Area Narcotics Trafficking Interdiction Squad in the early 2000s and the misuse of federal Racketeer Influenced and Corrupt Organizations Act funds by PCSD officials over past decades as justification for the commission's supervision.

"There have been issues inside the Pima County Sheriff's Department before and I think handing them a blank check is probably not wise," she said. "So it's insulting being accused of being anti-law enforcement when all we're doing is asking questions."

Valadez has urged Christy to reconsider the decision to pull his appointees, saying their voices need to be heard too.

"I don't think it serves anyone in any democracy when someone pulls away voices that need to be at the table," Valadez said. "There are strong opinions on the other side as well, this is an issue that needs to be fully discussed and fully vetted."