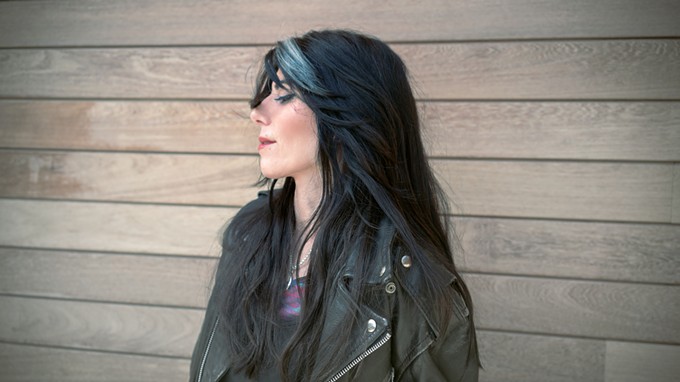 (Photo by Tracy Moyer)
Lauren Monroe is celebrating the release of “Messages from Aphrodite” at 191 Toole on Thursday, Oct. 6. Husband Rick Allen will be part of her band.

After spending the summer on the Stadium Tour with his band Def Leppard, drummer Rick Allen is stepping back into clubs to support his wife, Lauren Monroe.

Monroe is celebrating the release of “Messages from Aphrodite” at 191 Toole on Thursday, Oct. 6. Allen will be part of her band.

“We’ll be playing for the evening and telling stories of empowerment and healing and playing original music,” Monroe said.

“I empower people through energy and drumming. I like to weave that through the whole set to explore some of the things you go out to escape. We wanted to bring everyone together in the venue. Now is the time where people are coming out more. We’re on the heels of experiencing something very traumatic.”

The world is divisive and worrisome, she added. Monroe uses music to heal.

“Lauren’s music, in particular, speaks to community and shows us what we have in common,” Allen said.

During the performance, the couple will raise funds for suicide prevention and veterans programs.

In 2001, they founded the Los Angeles-based Raven Drum Foundation, which serves, educates and empowers veterans, first responders and trauma survivors to prevent suicide through innovative wellness-support programs. They do so through advocacy, storytelling and the promotion of complementary and alternative medicine.

At shows, they partner with local organizations to provide free tickets to veterans, and raise funds by auctioning their mixed-media art.

Released in September, “Messages from Aphrodite” was recorded in 2021 and “all the songs are about love in some facet and how we use our ability to love through various stages of life and circumstances,” she said.

“Aphrodite is a goddess of love and she’s a warrior goddess, too. All of these songs reflect attributes of her. She became the icon for the album, and she brings about a point of view that’s from the higher feminist.”

The two spent time at home “using our gifts and talents to rehearse.”

“We love our band,” she added. “To be with everyone together is great. To look behind me and have him there (is great). I like to tease him when we are on stage.”

Allen added with a laugh, “The only thing I get to see is behind her. It’s kind of a win-win. I actually really love it. I play acoustic drums, which I hadn’t played in Def Leppard since 1984. That’s what inspired me to play in the first place. I don’t have to rely on electronics. I get up there and play. It’s a great way for me to hone my skills on acoustic drums.”

Allen and Monroe said it’s also a victory when Def Leppard fans come to the show to see him not knowing what to expect and leave a fan of hers.

“It’s nice when there’s a crossover,” he said. “We have an awesome band. We sound really good. We’re happy about our live performances.”