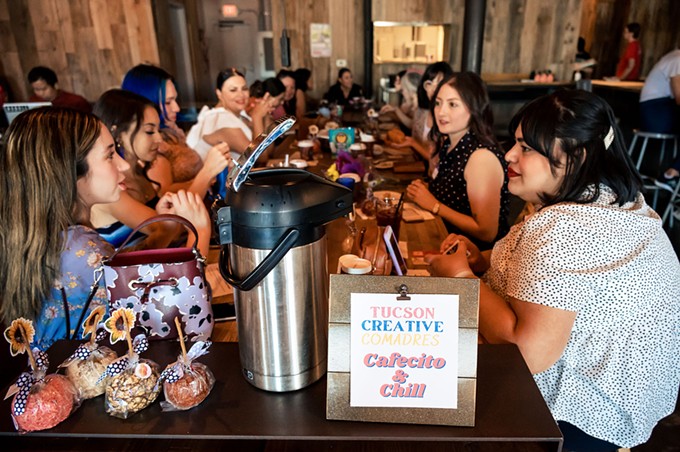 (Angie Roberts/Submitted)
The Tucson Creative Comadres at their Cafecito and Chill event at Cartel Roasting Co. on Sept. 18. The group of Latina creatives and entrepreneurs meet monthly to network, collaborate ideas and cultivate community.

As the founder of the local networking group for Latina entrepreneurs the Tucson Creative Comadres (TCC), Fabiola Bedoya cultivates a sense of belonging by promoting community and collaboration.

It was a pipe dream that blossomed into a monthly meet-up group and growing social network community. Through it, Bedoya encourages Tucson Latinas to uplift and seek support from each other. Their most popular event, Cafecito & Chill, brings together comadres to discuss ideas, promote their businesses or even just to spill the frijoles.

Most recently, Bedoya participated in the Startup Tucson’s 2022 Idea Funding Pitch Competition to present her idea to a panel of judges. She made it as far as the second down-select round on Oct. 5, competing against over 50 other companies. Although just falling short of the Main Stage prize, she is still eligible to win the Adelante Arizona and Social Impact prizes, both worth $5,000 each.

“I started through (my pitch) strong and the questions were very engaging that I got from the judges, that gave me hope that they were invested in what my plans were with the possible funding and what the big plans are for this group,” Bedoya said.

A graduate from the University of Arizona College of Fine Arts, Bedoya said it didn’t teach the fundamentals of building a small business. 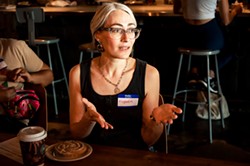 (Angie Roberts/Submitted)
Alejandra Foerg at the Cafecito and Chill event on Sept. 18 at Cartel Roasting Co. Foerg, who hails from Nogales, Arizona, is a postpartum doula. Her small business La Chuparosa offers “sacred care for all of life’s cycles.”

“That’s what you are, you have to put yourself out there and market yourself.”

Just before graduation, she learned her peers were in a similar spot.

“A lot of people didn’t really know what they wanted to do because they weren’t sure how to go about it,” she said.

She had taken it upon herself to attend entrepreneurial workshops and networking events such as Techstars Startup Weekend Arizona during the fall of 2020. A three-day program for aspiring startup entrepreneurs to collaborate with experts and other aspiring creators to turn an idea into a minimal viable product to present in front of a panel of judges. After graduation, she applied for an Idea Funding Pitch Competition through Startup Tucson that centered BIPOC creatives the following spring of 2021.

“I made it two rounds in and (received) positive feedback that I (could) put in my back pocket,” Bedoya said.

Her second time around in the competition, had she moved forward to the final round in November, would have allowed her to present during the TenWest Festival. The grant would have helped her build a website with a directory of Latina creatives, allowing the online community to expand outside of Tucson; a working space for affordable workshops and funding for behind-the-scenes business fees.

“I want to build a big storytelling aspect of a creative entrepreneur journey and highlight different artists,” Bedoya said

Through her research of the Hispanic community, Bedoya found that the culture brought additional challenges to the pursuit of a creative or artistic career.

“If you’re a first-generation, you know your parents came here and worked hard to provide for their kids and they want to see their kids succeed and not struggle like they (did),” Bedoya said.

It is embedded in the culture to pursue an education and get a well-paying job that has benefits.

“One night I was like, ‘You know what, you gathered all the data about creatives and their pain points, let’s start looking at Latina stats,’ as soon as I started picking up on the Latina pay gap, something lit a fire in me,” Bedoya said.

After becoming a mother, she knew she couldn’t attend as many workshops because kids weren’t allowed in those spaces. She noted a need for Latinas and mothers within the entrepreneurial community.

“The first meeting I launched free of charge and honestly I used a $25 gift card that I got from attending a focus group and $10 of my own,” Bedoya said. “I wanted to test it out first.”About 10 attendees came to the first meeting including Erica Cantua, a local painter and muralist of Erixaart, who met Bedoya through a mutual friend at a pop-up flea market at Borderlands Brewing Co. in 2018. Since the first meeting, Cantua said the attendees have “grown every month.” 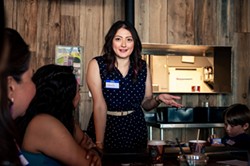 Cantua, who quit her job last year to pursue art full-time, painted the mural on Speedway and Columbus, on the west-facing wall of the Tucson Appliance Company. She is working on constructing a mobile art shop out of a yellow school bus.

“My mission and vision have always been the same, to help creatives succeed with the tools to be able to catapult themselves as a small business,” Bedoya said. “Even if they just need help learning how to market themselves as artists or (making) connections, or (accessing) resources.”

Bedoya, who is a full-time marketing coordinator for Goodwill Industries of Southern Arizona and a single parent, said she’s been exploring her place within the community and developing community engagement through social media.

“I make sure I know what people are doing, what accomplishments they’ve done and make them feel seen,” Bedoya said. “If I am paying attention, then they know that I care, and I do care.”

“I was referred to (Tucson Creative Comadres) by a friend,” said Marcia Fragoso, small business owner of SocialBuzzAZ, a bartending and catering service. “That’s really all it is, small business owners being able to talk to one another and getting to meet people and hearing what inspired them.

“I want people to bounce ideas off of each other and have that support,” said Angie Roberts, a local wedding photographer who owns CandidSol.

Alejandra Foerg, a postpartum doula who recently moved back to be closer to her home of Nogales, Arizona, was also looking for the company of like-minded individuals with whom to share and contribute her gifts.

Through networking events like the Cafecito and Chill, “comadres” are able to cultivate connections in an accessible and relaxed setting.

“I just know where I want to take this and branch out to a general creative comadres community online and travel to smaller places that may not have this kind of thing,” Bedoya said. “I want them to know that they’re a part of something.”