Lame of Thrones: 'The Kid Who Would Be King' is a Royal Disappointment 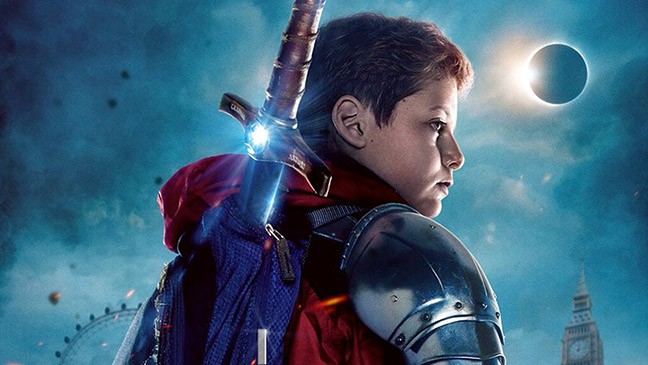 A modern-day, bullied kid pulls a sword out of a stone and is tasked with saving the world in The Kid Who Would Be King, writer-director Joe Cornish's attempt to capture the youthful, magical wonder of Harry Potter and mix it in with the legend of King Arthur.

While he doesn't completely fail, an overall drab directorial style, messy action, and many moments that are far less clever than they think they are keep this action-adventure from being a true crowd pleaser. This one will probably work better on a smaller screen, so wait until it's streaming.

Do that, and you'll catch a pretty good performance from Louis Ashbourne Serkis (son of Andy) as British school kid Alex, the fed-up boy who sticks his neck on the line to protect best bud Bedders (Dean Chaumoo) from bully Lance (Tom Taylor). Serkis is a little overwrought in some of the film's more emotionally demanding parts, but he hits the right notes when it comes to Alex's heroic proclamations after he procures Excalibur from a big rock in the middle of a construction site.

Alex happens to notice that Bedders sounds a lot like Bedivere, and Lance is short for Lancelot, so he figures destiny requires him to knight the two, along with Kaye (Rhianna Dorris), Lance's partner in crime. (King Arthur had a knight named Kay...get it?). They form an unlikely alliance against Morgana (Rebecca Ferguson), banished half-sister of King Arthur who will return in flying dragon lady form and make England the hub for the apocalypse.

Looking a little lost with wild hair and a Led Zeppelin T-shirt, Patrick Stewart has a few scenes as an aged version of Merlin. He gives his few moments a fun, goofy touch, but he feels more like a guest star than a real player. For the most part, Merlin appears in the form of a teenager (Angus Imrie), and an owl whenever Merlin sneezes. When you add up all the different versions of Merlin, he fails to be a captivating, unified character. He's just sort of odd.

Cornish, whose lone feature directorial credit was the low-budget Attack the Block (2011), allegedly procured a $59 million budget for this one, considerably more than the $13 million he got for the prior film. While he showed a scrappy ingenuity in Block, King actually winds up looking like it cost less money than Block to make. The special effects are messy, the action is haphazard, and the overall palette of the film is surprisingly dull for what's supposed to be a sprightly adventure.

Fergusson, so good in the Mission Impossible movies, like Stewart, gets little opportunity to really make a mark as the villain. When she's fully transformed into her dragon lady persona, it looks a little bit like Ray Harryhausen's stop motion Medusa from Clash of the Titans, but not enough for me to actually say it's cool. It's just derivative and sketchy.

I will say there are worse movies for your kids to see. There's a good central message about making nice with your classmates and banding together to accomplish things that is much appreciated. There's also a sweet, semi-moving element involving Alex's single mom and his missing father. Cornish might do himself well to do a low-key family drama somewhere along the line rather than sped-up action adventures. He does alright with the humanity stuff.

It's when he tries to do the magical things that The Kid Who Would Be King falls flat. It's a muddled attempt at a new franchise in a post-Harry Potter world (don't get me started on those shitty Fantastic Beasts movies). I'm suspecting this one won't be getting any sequels.