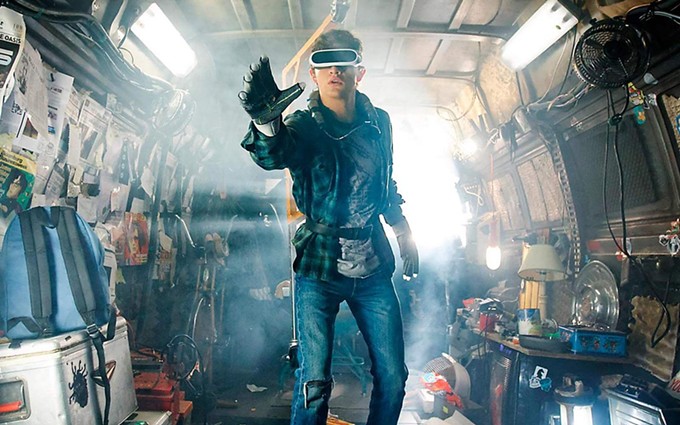 The movie will leave you bleary eyed in a bad way.

Steven Spielberg goes for broke but leaves you bleary eyed in a bad way with Ready Player One, based on the very popular Ernest Cline novel. The film is so full of pop culture references that it doesn't so much deliver them as visually vomit them into your face.

Rather than relishing the opportunity for '80s nostalgia, Spielberg opts for whiplash pacing and miscasting, squandering the chance to allow any of the fun elements to really sink in. They pass by so fast, the film comes off as more of a test/exercise for speed trivia aptitude than an attempt at a true narrative.

The futuristic storyline involves something called the OASIS, a virtual reality world that is not only a pastime, but a total escape from real world poverty and pollution. Wade (Tye Sheridan) lives in a place called the Stacks, basically manufactured homes piled on top of each other, and he whiles away many hours in the OASIS as his alter ego/avatar Parzival.

Halliday (Mark Rylance), the inventor of the OASIS, dies, and in a plot twist quite similar to Willie Wonka and the Chocolate Factory, derives a way for somebody to win control of the OASIS. He plants keys throughout the virtual world, and the one who finds all of the keys first gets the whole damn thing.

As soon as Wade/Parzival puts on his VR goggles and jumps into the OASIS, the trivia Easter Eggs start flying. The opening race scene set in a shapeshifting New York is a true winner, with Parzival trying to evade King Kong in his Back to the Future DeLorean. What follows are a lot of blink and you'll miss it cameos by the likes of Freddy Krueger, Jason, Chucky, T-Rex and Batman. Scoring the film's most prominent cameo would be The Iron Giant, which is admittedly super cool.

In an ingenious sequence, Parzival and his virtual friends wind up in the Overlook Hotel from The Shining, contending with the bloody elevator, the creepy twins and the decomposing old lady. Alas, we don't see Jack Nicholson; just his axe.

The sequences that work are far outweighed by passages that become a blur as they race by, as the movie often refuses to take a breath. Making matters worse, the reality world is populated by characters more cartoonish than the videogame avatars.

The usually reliable Ben Mendelsohn seems lost as Sorrento, a former Halliday employee bent on OASIS domination. Olivia Cooke fails to distinguish herself as rebel Samantha (Art3mis in the OASIS), and Sheridan is bland.

Rylance, playing multiple ages, comes off as a bit goofy, and his casting as Halliday makes little to no sense. In the early stages of production, it was rumored that Spielberg was courting the original Wonka, Gene Wilder, before he passed away. Since the movie deeply references the '80s, casting somebody like Michael J. Fox, Henry Thomas, Tom Cruise or Kevin Bacon—true '80s icons—could've been a lot of fun. Rylance seems out of place.

The film holds together OK enough for its first three quarters, but ultimately falls apart in its final act, to an extent that is actually boring and makes little sense.

The soundtrack sounds like somebody trying to ape John Williams. For only the third time in his moviemaking career, Spielberg turns to another composer (Alan Silvestri) to score one of his films. The result lacks originality, and is missing that catchy, triumphant yet somehow non-distracting vibe that Williams always seems to pull off. It plays like Williams-Lite.

I've made no secret of my love for Spielberg. Jaws is, and will probably always be, my all-time favorite movie, and many other Spielberg films reside near the top my list. Ready Player One definitely belongs in the bottom half of his massive cinematic output. Perhaps it's coming to us a mere few months after his last movie (the far superior The Post) is a sign that his plate was too full to make Ready Player One a winner. It's a visual rush job.