Stars Pick Their Top 5! This Week: The Surfbroads

During the early '60s, surf music and beach-party films owned much of pop culture; it was a sort of rite of passage for kids looking for a less wholesome escape from a puritanical existence. If you look and listen closely there was lots sexual tension and musical unrest beneath the idyllic imagery of endless summers and Annette Funicello frolicking on sun-blanched sand. The smart woman of Surfbroads find that subtext and exploit it—"Hot broads playing cool surf," as they describe themselves. Their saucy instrumental surf shifts effortlessly between the prim and the improper. In fact, the quartet's debut show on Halloween a year ago was pretty telling. Local magician Magic Kenny Bang Bang was hosting a magic-filled extravaganza at Sinatra's. The band was nervous, says drummer Velvet Hammer (aka Maggie Rickard). "The air was thick with a haze of indulgence and debauchery as exotic dancers gyrated around the room. Kenny pulled 20 or so marble eggs from a woman's vagina in direct succession and the bartender, bearded and dressed in drag, pole danced for tips, while smoking. After that, the pressure was off because, well, you can't really top that. All we could do was rock the hell out." Here the Surfbroads pick their Top 5 artists who talk the talk and walk the rock. Go see The Surfbroads at Che's Lounge, 350 N. 4th Ave., Dec. 3, 10 p.m.

1. Patti Smith: The Godmother of punk and in true punk spirit never let the pursuit of fame and fortune distract her from creating deep, thought provoking art through her music and poetry and relentlessly supporting social and political revolution.

2. Joan Jett: A staunch supporter of women's reproductive rights and animal rights. She was one of the most influential women in rock and then formed Blackheart Records giving voice to the next generation of strong feminist bands like Bikini Kill and L7.

3. Pj Harvey: She's not afraid to address the uglier side of what is happening in our world today and she uses her platform to inspire her fans and fellow musicians to question and protest the injustices perpetrated by the powers that be.

4. Bikini Kill: Redefined feminism for their generation and inspired so many girls to pick up musical instruments and form their own bands. Who didn't want to be a riot grrrl in the '90s. 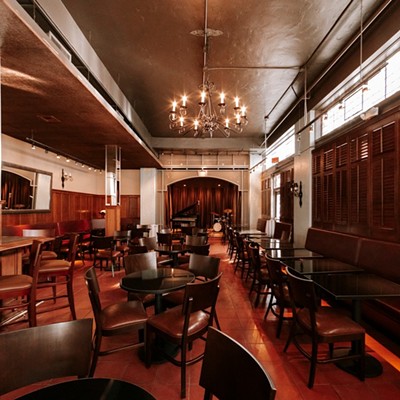