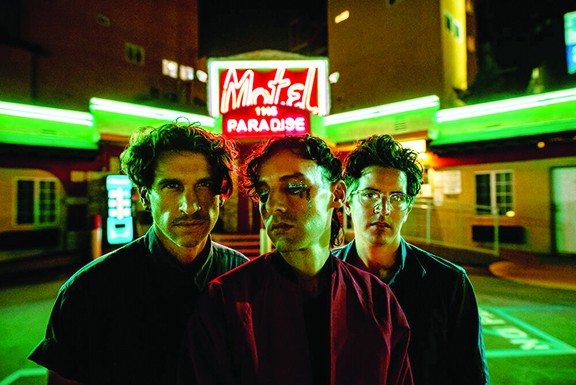 Brittany O’Brien
LA pop outfit James Supercave blend wild electronic production with darkly smooth vocals to create a collection of psychedelic melodies that reminds us what makes modern indie music so engaging. On their new M.O.W.O. EP (released Feb. 21), James Supercave break away from softer ballads from the debut album to showcase a more chaotic, rhythmic production style with countermelodies mingling between thumping bass notes. The development is a great move, not only in artistic progression, but to distance themselves from the countless other synthesizer-tinged indie pop grounds. Hell, there are even some distorted guitars and bells on this thing. Perfect for delivering "signature psych-pop aesthetics and alternative musical sensibilities." Ahead of their tour through Tucson, James Supercave vocalist Joaquin Pastor told us about five albums that keep him grooving.

Eleven years until they gifted us this record and it was worth the wait.

To Pimp A Butterfly

Hard to overrate this master work. Would send to aliens to prove humanity's worth in this universe 100 percent.

This will make any day better. The pinnacle of Brazilian Afro-funk. No filler.

LA Priest
"What Moves"
Latest from the reclusive weirdo. A sludgy groove lead by a hypnotizing manipulated vocal.


Capyac
"Someone Real"
Super fun dance track from one of my favorite bands in L.A .