Know Your Product: Riders In The Sky 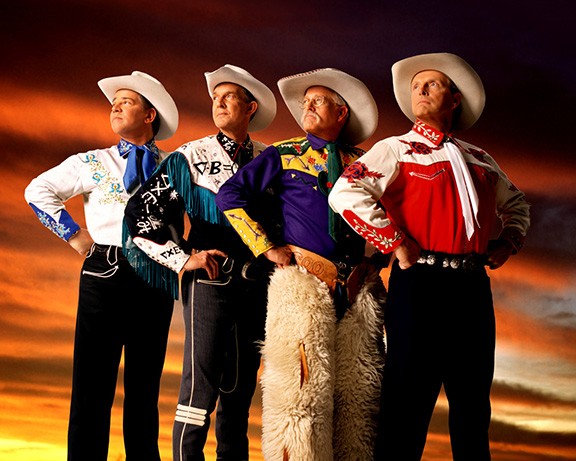 Courtesy photo
Like four cartoon cowboys, the Riders in the Sky weave a colorful landscape of frontier escapades and stories told around a campfire. Riders in the Sky is a Western music ensemble with more than four decades under their belts, blending comedy and country into a dry cowboy style that is far catchier than you might expect. Over their dozens of albums since the late '70s, they've crafted a wacky yet tight comedic and musical style that transports listeners into a world of tumbleweeds and cattle skulls. But don't be distracted by the bright costumes and jokes—Riders in the Sky display technical proficiency on the accordion, standup bass, fiddle and more. Ahead of their roughly 8,000th show, guitarist and vocalist Ranger Doug told us about some of the albums that inspired him to be a ramblin' man.

Two Sides of The Smothers Brothers

Where I first learned you could be musical and hilarious at the same time.

Sons of The Pioneers

Memories of The Lucky U Ranch

Gene's greatest hits. I learned the classic songs, and learned much from Gene's easy vocal delivery.

Small band jazz with the master of the rhythm guitar. The source of my sound and style.

Live at The Sands (Before Frank)

Freddie at his finest in a big band setting.

I know this makes six, but how could I leave off an album I played a thousand times, and taught me so much about singing, harmony, and songwriting?