For music so polished and electronic, Flint Eastwood reaches surprising emotional depth due in no small part to frontwoman Jax Anderson's powerful vocals. She croons and shouts over explosive synth drums and glistening keyboards, making something akin to the coming-of-age story of some impassioned future girl. A look at Eastwood's favorite albums should give you a good example of their music: the throbbing synths of St. Vincent, the catchiness of Tegan & Sara, the heartstring-tugging of Arcade Fire. Flint Eastwood is unquestionably on the cutting edge of indie. 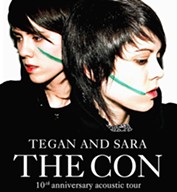 This was the first record I got into that had crazy amounts of lush instrumentation featuring horn sections and strings. Annie Clark is also a total boss of her art and is an incredible musician. Her voice was pretty and petty and interesting and massive and everything all at once and I fell in love with the sound of it. "Paris is Burning" is my jam.

I used to listen to this record with my dad. I remember hearing songs like "Piggies" & falling in love with the strangeness of it and songs like "Ob-la-Di Ob-La-Da" making me fall in love with storytelling in music. It shaped my songwriting for sure.

Hits that make you feel good. I will always love the campy weirdness of ABBA.

I was raised in a crazy religious household and could only listen to religious music until I was 16 years old. One day, when I was in the darkroom in photo class, a friend of mine showed me this record and it changed my life. I had never heard anything so raw and honest before. It was clean and polished and it had so much feeling to it. It felt like I was listening to a friend tell me theories on existence. This record opened up a whole new world of music for me.