More than any other genre, pop music is formulaic. And that's why when a musician makes a discernible advancement in the field, you should take note. Introducing Paul Cherry: a total ham, even when he's adorned in fruits. His laid-back, quirky style of pop is perfect for rainy bedrooms, late night drives or anything else you'd like to add just a bit of color to.

Cherry recently released his debut album, Flavour. It's a brief 30 minutes, but perfect for repeat plays. He manages to mix together a handful of recent musical trends, yet transforms them into something somehow akin to '80s sophisti-pop. His dreamy songs contain bits of jazz, funk, hypnagogic pop and bedroom pop. Although commercialization is inherent in a lot of his musical style, this doesn't detract from a heavy dose of personality. This is soul music for the internet generation. Ahead of Cherry's show at Club Congress, we asked him to pick five of his faves... 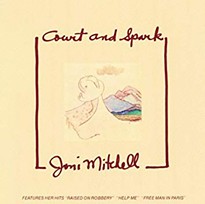 This album really rocked my world in early college. I was in college for music and I had to write a 20-page paper on this album for a music history class, and so I got really close to this album over the course of a semester. This album, for me, is the height and apex of cool jazz and cool pop writing combined, it's cool because it's not afraid to be emotional and unapologetic and gritty in all the right ways! Joni is probably my favorite musician of all time and all of her albums have had a profound effect on me, but this is the standout for me.

Courtesy
Wings Wings at the Speed of Sound

Wings at the Speed of Sound

Once I realized that Paul was the dopest Beatle after going through a years-long George phase, I went deep into Wings. The song that really turned me on to Wings was "Arrow Through Me," which isn't on this album, but this album is huge for me because of its replay factor, and its pacing. I really set out to get pacing like this on my record, and there is a little "let em in" quote on my record. (lmk if you can find it.)

I went to college with this band and grew up from 19-21 really watching Alex hone in on his sound, and watching someone with such a direct vision execute it so flawlessly in front of your very eyes is awesomely inspiring. Watching this record be made in front of me gave me the confidence and ability to know that I could make cool records too, if I really really set my mind to it.

I heard about this album through the grapevine months ago after touring with their drummer in a band called J Fernandez, and finding out that Shy Boys were this little band of best buddies from Kansas City who were making such special music was so inspiring to me, and this record is so so special to me. I liked it so much, I even asked Ross from the band to help me record my next album. I REALLY encourage you to get into this band. They're making this awesome music on the road right now, so go catch a show!

This record has just been stuck in my head since the moment I heard it, and I keep going back to it because it's so pleasant and hooky and just an overall fun ear worm. I think a huge part of me wants to jump into electronic and super shiny music, and this album gives me intense creative envy, but in a good way. The songwriting topics on this album vary from "taking a break" to "waking up" to "respect your parents" and it's just really funny and cute, plus I'm a sucker for any Japanese singing, and the singer of this group regularly flips languages between English and Japanese in a very fast way.