Self-described as "heavy pop," it's pretty incredible Sad Baxter is from Nashville and not Seattle. Their noisy aggression seems straight out of the '90s fog-and-flannel of Seattle, and their sweet vocal hooks are perfect for the modern indie pop of a coastal city.

We asked members of Sad Baxter to name some of their favorite albums. Their choices reflect obvious influences in their music: Nirvana's vocal dynamics, Weezer's power pop guitar work. But is obvious influence a bad thing? When the music is entertaining in its own right, regardless of whether or not you know who influenced it, I'd wager no. There are huge cues from grunge's sound style, mixed in with modern bedroom pop production and choruses. This leads to some beautifully conflicting musical moments, like a sweet and catchy melody leading into the vocals shouting, "I don't want to die, but I'd rather die than be with you." 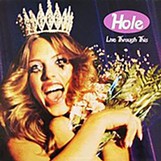 Courtesy
Hole - Live Through This

I've been consciously listening to rock albums since I was a child taking in my dad's collection of CDs, but I discovered Hole on my own, and it blew my mind when I brought this album home. I was obsessed with the dichotomy of prettiness and ugliness on this album. I loved all the pretty, ethereal sounding guitars before the distortion kicked in, and I loved Courtney Love's ability to go from sounding like someone who just wandered onstage and shyly found themselves in front of a microphone to sounding like this totally punk rock, confident, unapologetically ugly demander of everyone's attention.

Courtesy
The Muffs - Happy Birthday to Me

Happy Birthday to Me

I had a hard time picking which Muffs album to include, but this one usually ends up being the one I listen to the most. Deezy was the first person to turn me on to them a few years ago and they kind of blew my mind. It filled a void in my musical digest that I didn't realize I had. Their combination of ear-worm melodies and smart, concise songwriting wrapped up in a guttural, distorted and punk package really checks all the boxes for me.

Nirvana was my first love and will most likely always be the most important band to me. I love everything they released, but In Utero is my perfect combination of catchy songs with simple melodies and in-your-face sounds. The drumming on this album is some of my all-time favorite. Kurt Cobain's melodies are killer, and his range from practically mumbling songs to his voice breaking and sounding insane inspired me more than I even realize most of the time. I also love what an outspoken feminist Cobain was, and touching on an uncomfortable, "taboo" topic of discussion with the song "Rape Me" was refreshing to me—to my poor mom's dismay as I sang along as a child.

This is one of those albums that I'll listen to and, at the start of each song, say "Ugh, I love this song so much." I know it's tired, but this was a huge album for me, and I don't think there there is a bad song on it. It's catchy, heavy, weird, honest, concise and smart. It has so much depth if you really dig in and analyze the song structure or the production, but at the same time you can just turn your brain off and sing along to song after song of pop-rock perfection. Also, in terms of drumming, Pat Wilson is definitely a huge influence in how I come up with parts for Sad Baxter.

Eight Arms To Hold You

When my parents would take me to our local record store, I'd tend to buy a couple CDs based off actually knowing about the band or album, and then I'd buy one based off sheer curiosity. This was one of the only times my random choice worked in my favor and, geez, did it ever. The guitars on this album are so thick and heavy, it blew my mind. I loved how shamelessly feminine the vocals were, in a time where it seemed like every popular loud band featured men. This band knew how to stack their harmonies tastefully, and I would say this album may have inspired me more than any other album I've ever listened to. I wrote my first real song at age 13, and listening back to it now I know I was totally trying to rip off Veruca Salt. I was very much of the "What Would Veruca Salt Do?" mindset when it came to melodies and harmonies.