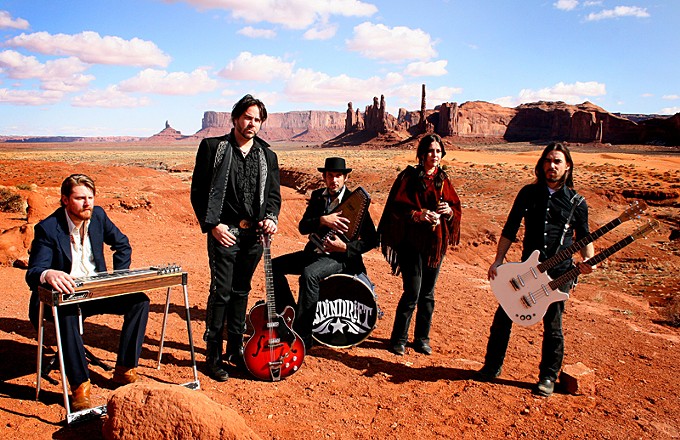 Even if you haven't heard Spindrift's theatrical and Wild Western psychedelic rocking, taking a look at the albums that influenced them should give you a good feel for their varied and colorful style. Since the mid-'90s, Spindrift has conjured up landscapes out of shoegaze, desert rock, psychedelia and outright film score. Taking major cues from the likes of The Doors, My Bloody Valentine and Ennio Morricone, these LA rockers wield their instruments like six-shooters and have an easy time blowing your mind. Ahead of their upcoming Tucson appearance, we caught up with Spindrift frontman Kirpatrick Thomas to find out the five albums that he loves to spin...

This primarily inspired our tune "Isle of Lost Souls" from The West. No guitars, just a wild percussionist and a tight horn section performing macabre minor-esque intricate waltz numbers mixed with monstrously fast-paced "running from the vampire bats who are gonna get ya!" type orchestrations. Sadly overlooked. True genius! Not just for Halloween. I haven't heard much else from Anthony Di Lorenzo but damn...This one is top notch.

Johnny Western is a cowboy who SOUNDS like a cowboy. Can't say how important that vibe is as opposed to just carrying the name. Sons of the Pioneers apparently backed him up. He would perform with Johnny Cash during his Johnny Cash Show heyday. This three-CD set is utter genius, a masterpiece one track after another. You'll feel lost in this heroic West. His vocals are so spot on its uncanny. The perfect vibrato, yodeling, four-part harmonies, and crystal clear old analog tape production. After covering many tunes here, we decided to do our album Ghost of the West which led to a Ghost Town Tour in 2012, and an impending film to be released by Indican Pictures. Also of note: Bear Family Records impeccably constructed this box set together with massive liner notes, photos, and bio. A most well deserved homage to a sadly overlooked genius.

Bull-fighting music but we're taking impeccably produced, arranged, tracked, recorded, mastered. Like nothing you've ever heard. So epic and heroic that you feel like running with the bulls on speed. The castanets, flamenco stomps, intricate strings, wailing trumpets all sound like you're in the middle of the arena. Spindrift would play this album before we would go onstage. It really hyped us up. So much so, we learned every song inside out. Hence, "The Matador and the Fuzz" was born.

After his magnum opus "Electric Lucifer," the far-out electro pioneer pseudo teacher Bruce Haack got even more dark and pissed off and in 1978 Haackula was born. By this time, he had given up on writing electro-educational children's records (even after appearing on Mr. Rogers) and lashed out at the PTA with lyrics like "People have put down records that I've done, words I have written, songs I have sung. You have made me feel like a fool...Suck my t*#t." He mixes these lyrics with his trademark hypnotic beeps, blips, and innate sense of melody. Altogether, it's a cry for artistic freedom. His unique and intriguing story is outlined in the questionably titled documentary Haack: King of Techno. I suppose most wouldn't picture Spindrift as an electro-influenced band but that can't be farther from the truth. If you listen close, Bruce's influence is everywhere.

So much has been said about Joe Meek so I'll just keep it brief. His recording techniques have rubbed off on Spindrift to the point that it's become so immersed into our psyche that every other tune we write sounds like a "what would Joe do next" kind of scenario. Best heard on tunes like "Ghost Patrol."