Born from the aggressive yet fun-loving mind of former Dropkick Murphys singer Mike McColgan, Street Dogs keep the punk vision alive with their anthemic shouts and distorted wildness. Their working-class chants conjure up images of tired, down-to-earth folks who just want to rip off their ties and cause a ruckus in any way they can.

These Boston rebels just finished their 15th year as a band, and just released their newest album, Stand for Something or Die for Nothing, this week.

So what's the point of making classic punk music post-2000? Well, when it sounds this good, it's hard not to get swept in. And besides, in their own words, "The world needs a little punk rock and roll." Ahead of their show at 191 Toole, McColgan told us about the five albums that made him howl.... 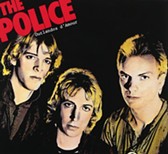 This record rocked me to the core. First of all the rhythm section of Sting and Stewart Copeland is other-level great. Also the innovative, sparse and phenomenal guitar work of Andy Summers is insanely amazing. The songs from start to finish are all great.

This record is a straight rabble rouser from the rip. It is loaded with pulverizing drums, driving bass and innovative guitar propulsion. All of the songs have grit, substance and desperation. I listened to this when I first got it for about three years straight.

This record shattered my whole world when I heard it. First time I heard this record was at my buddy's house with green-and-whiskey-influenced ear way, way back and it only enhanced a record that took me on a roller coaster of thoughts, feelings and emotions.The bang, hum, fire and ferocity of this record is second to none.

This record has it all. Great songs, flawless musicianship and songs that have legs in this universe and any other. Each member of this group are titans in their own right but collectively are virtually untouchable. Listen to this at least once a week to this day.

This, in my humble estimation, is the greatest record ever recorded. It has everything and never relents from start to finish. This is the litmus test by which all other records I listen to are judged. The opening title track, the power of each individual track, the sequencing and the end of it are perfection.