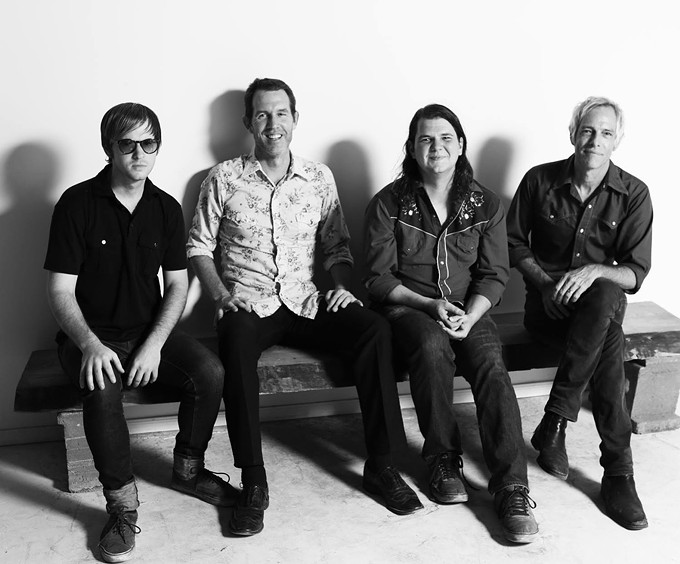 There are two big words that come to mind when listening to Tucson's own La Cerca: Tone color. The guitar timbres are clean, mildly psychedelic and so damn nice; the vocal layers are smooth yet catchy; the drums are relaxed but know how to punch through. Usually a band has to get real wild or experimental to create particularly colorful or rich sounds, but these guys stick to their pop/rock roots and still manage to have powerfully textured soundscapes.

Coming from Tucson, and having songs about monsoons, Arizona and their love of the Sonoran, it's pretty satisfying to not have La Cerca play stereotypical dry and twangy desert folk rock. Instead they take alt-rock and mix in the sounds of vibraphones, mellotrons, sweet vocal harmonies and more.

Their newest album, Sunrise for Everyone, released by Fort Lowell Records in 2014, is their "grand statement and masterpiece." La Cerca pulls cues from all shades of alternative rock: jangle pop, shoegaze, dream pop, neo-psych. Take a look at the bands mentioned below by various band members and you'll see the obvious influences: R.E.M., My Bloody Valentine, Galaxie 500. If you're a fan of any of those, take a listen.

My first band in the '80s, The Equalizers, played covers songs by The Cars. Elliott Easton's guitar work is a huge influence on my guitar playing. This underrated experimental pop record keeps getting better every listen. Ric Ocasek's songwriting is perfectly strange and ahead of its time, yet it defined the '80s. Benjamin Orr was my first favorite singer I idolized.

The melancholy dreamy sounds were the soundtrack to my teen years. Robert Smith's use of the bass started my obsession with the instrument. Seeing the Cure at their peak was one of my most memorable experiences.

Working in a used record store/book store, I found myself consuming everything Dylan. It's a common thread among our band. La Cerca even has a Dylan cover band called Rolling Thunder Rescue.

KLPX's Test Department hipped me to this band through their EPs before this album came out. I was obsessed even though everyone around me thought it was awful. I played it to my high school class on the bus on a field trip, proclaiming that this was the future of music. These days "shoegaze" is bigger than ever.

Our guitarist Bill Oberdick feels his guitar playing is informed by this album. It's likely that he and I were at the same R.E.M. concerts in the late '80s before we knew each other, as we are both from Ohio. College radio was all I wanted to hear. R.E.M. added a bit of twang and jangle to stretch our ears, leading to other influential acts like Big Star and Galaxie 500.