Who will be Tucson’s next Iron Chef? 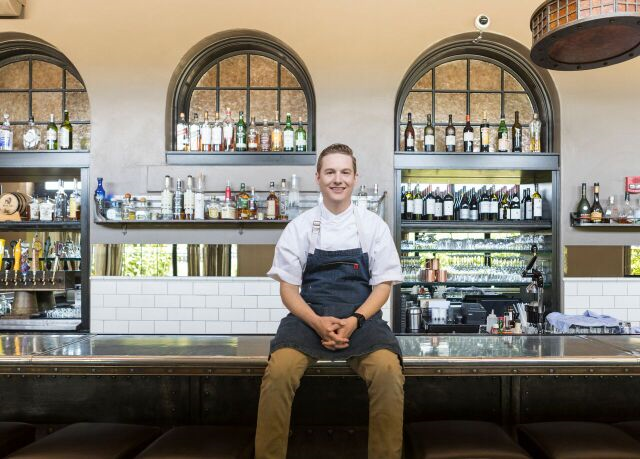 Courtesy Photo
Brian Smith: “Regardless of who wins, we are down to have a really good time.”

In a city of many talented cuisiniers, there can be only one Iron Chef. The competition heats up at Casino Del Sol for a night of fire and fury as Chef Wendy Gauthier attempts to knock standing champion Chef Brian Smith from the throne.

Gauthier was selected by a round of blind judging at a Meet The Chefs event last month at the casino, where she presented corn panna cotta with roasted poblano shrimp salad.

"It's our time and our turn," Gauthier told the crowd on the sunny pool lawn. "We are so ready to compete."

Gauthier is the owner and head chef at Chef Chic, a catering and private chef company. She and her team have been trying for six years to compete in Iron Chef. Brian Smith, executive chef at Maynards Market and Kitchen, however, finds himself having to compete for a second time after winning last year, almost to his chagrin.

"I don't normally do competitions, it was outside my comfort zone, but it was proving to myself that I could do something I didn't want to do," Smith said. "I competed against Travis [Peters] and I was able to win, but with that comes having to do it again."

The competition works much like as it's seen on TV, with all of the attendant suspense and secrecy. The chefs receive a list of basic ingredients that will be available in the kitchen such as eggs, flour, sugar and basic produce like tomatoes. Then, at midnight the night before the big day, the chefs are sent seven ingredients, one of which will be the secret ingredient at the competition.

"I don't think I slept much the night before," Smith said, "but we woke up really early that morning and made seven different menus with all of the ingredients that could be the possibility."

Smith said he and his team plan to take the same approach this year, noting that it seemed to work pretty well last time.

Last year, when Smith competed against Parish Executive Chef Travis Peters, the secret ingredient was pork belly, an ingredient hard to cook in the one-hour time frame the chefs have on the stage.

Smith and Gauthier bring different experience to the time crunch this year, as Smith works in a restaurant kitchen cranking out dishes for hungry customers in 20 to 30 minutes. Gauthier has a little more room to plan ahead in her catering business, but has the advantage of cooking different dishes every day rather than sticking to a set menu for months at a time. Regardless of experience, timing is something on both chef's minds.

"I'm nervous about that hour deadline and rushing, it's like when you get nervous and talk too fast," Gauthier said.

"I am trying to be a little more relaxed," Smith said. "We can cook better food if we aren't so anxious. I am working on getting my nerves in check so I can make better food."

Smith does have the advantage of competing a second time after his win last year, knowing the ins and outs of the schedule and kitchen.

"There's lots of little things that I learned from being in the kitchen, small nuances and issues," said Smith, noting oven temperature and gas pressure on the stove.

"But fire is fire," Smith said. "I'm good at smelling, I'm good at feeling, so you just have to change with your environment."

Fresh off a trip to China where he represented the U.S. in the International Food and Wine Festival, an international tourism conference, Smith will put all of his knowledge to the test at Iron Chef.

"In China we were cooking American food on wok ranges," Smith said, "so knowing when your pans are hot is key."

While in China, Smith focused on southern dishes like shrimp and grits and fried chicken in order to differentiate his food from the chef from Mexico also at the conference. He did, however, bring many ingredients from Tucson to add a little southwest flair.

Upon his return, the flavors and techniques Smith observed in China are making their way into his food as well.

"My food has always had a little bit of influence from Asian cuisine but now we are changing our menu to include ingredients like nuoc mam, a Vietnamese vinaigrette fish sauce," Smith explained.

His experience abroad is sure to be on the top of Smith's idea generator leading up to the competition. For Gauthier, there is another element that makes the competition special. She is the first ever female competitor at Iron Chef Tucson and is proud to claim the title.

"There are so many amazing female chefs in Tucson," said Gauthier. "I'm super honored that it's me to step up on that stage both as a woman and as a chef."

As the time leading up to the competition decreases, Gauthier is practicing by having her line chefs pick secret ingredients that she has to cook with. On the other hand, Smith said his preparation is to try not to think about the competition as much as possible to stave of the nerves.

"It's fun. It's a chance to show off what you can do. We all have a little competitive spirit in us so it's fun to compete against your friends, talk a little friendly trash talk and then win," Gauthier said.

With a culinary experience including food and drink samples for competition-goers before the main event and a celebration at the casino afterwards, the entire evening is sure to be a fun, and delicious, event.

"Regardless of who wins," said Smith, "we are down to have a really great time." ■