King of the Beach

Minuses: Tortillas could've been warmed up a bit more; no beach

As we all know, there are no beaches in Tucson. But you'd never guess it after visiting Fini's Landing, a northeast side bar and grill that is the very definition of a beachside restaurant. Beach-bar fare rules here and no matter what your idea of that might be, you will walk away most satisfied.

Beach-bar food, of course, includes seafood and Fini's offers plenty of it. Shrimp, oysters, calamari, cod and the like are prepped in tacos, ceviche, salads, sandwiches and sides. Things are fried, grilled, marinated, blackened and broiled. And fear not if fish isn't your thing. Beef, pork, chicken and even black beans also play a part on the menu. Influences come from Mexico, Puerto Rico, Cuba, Hawaii and Jamaica. And as every beach lover knows, beer is an essential part of the mix and Fini's doesn't scrimp.

One of our lunch choices was the Chubasco (the name of Fini's house-made hot sauce) shrimp tacos (a two-for-$8 lunch special that includes the house charro beans). Served open-faced to highlight the colors and all the ingredients, the tacos did the shrimp justice. The medium-size, garlicky shrimp were cooked to a translucent texture that brought out the best in the shredded cabbage, avocado, pico de gallo and the Chubasco sauce-laced aioli. The only gripe I had was that the tortillas fell apart, which made for messy eating. It didn't matter, I ate every last bit.

We started the meal with a cup of the soup of the day, steak chili ($4). The cup was overflowing with a garnet-red mix of soft, perfectly cooked beans and finely chopped steak. The first taste held a bit of sweetness followed by savory from all the protein and then a slight finish of heat. A bowl of this stuff would certainly suffice for lunch.

The charro beans have to be mentioned. These were perhaps the finest charro beans I've ever tasted. Cooked to a melt-in-the-mouth tenderness, they were redolent with garlic and dotted with bits of bacon, minced chiles and soft onion. If you dig down to the bottom, there's a wonderful liquid remaining; all it needed was a spoon.

Two hot dogs are on the menu: our Sonoran dog and a Chicago-style dog called the Flounder. We went Midwest all the way. Certain "Chicago" elements were missing, specifically the poppy seed bun and the nuclear-green relish. Instead there were thick garlic pickles and a regular, but nicely toasted, bun. The garlic-infused dog had been split and cooked on the grill, which added to the pop. And did I mention that the bun was toasted? Who can argue with that?

We had dinner on a Monday evening and the place was packed with football fans, many of whom seemed to be regulars. Fini's is one of those places that attracts a regular crowd, which is a good sign. Most of the patrons were men, but several families sat on the lovely patio out front.

We ordered two starters from the many choices in the "Getting Your Feet Wet" section of the menu. One was the parmesan garlic calamari ($9). The other was a specialty item, tostones ($5). Rather than being breaded and deep-fried, the calamari had been sautéed in garlic butter and tossed with shredded parmesan. Sadly, in spite of the fact the squid was cooked perfectly, the dish lacked flavor even after a healthy squeeze of the lemon that was served on the side.

The tostones, on the other hand, were a real treat. Tostones are fried plantains and there are any number of ways to do them. Here, they were flattened and then fried to a golden brown. We tried all three of the house sauces (red Chubasco, green Chubasco and habanero.) Give me the red, although all three were tasty.

Fini's offers several burgers that are topped with a variety of ingredients. We ordered the Chubasco burger, which had pecan-smoked bacon, fried jalapeños and cheddar served between a ciabatta bun. The flavors came together nicely, especially with a schmear of the Chubasco mayo that was served on the side.

I couldn't resist the pangas ($4 each), an item which is unique to Fini's. Resembling the Mexican fishing skiffs they're named after, the grilled romaine leaves are filled with a choice of ingredients. I opted for the ropa vieja (Cuban-style pulled beef ) and carne asada. Both were great and decidedly different. The ropa was slightly sweet, certainly tender and topped with a sprinkling of queso fresco with a hint of cilantro-infused onions. The carne asada had some of those heavenly beans on top as well as a squiggle of avocado crema, and was finished off with pico de gallo. The meat was well-seasoned and grilled to a turn. One minus: The meat in both pangas should've been served a little warmer.

We chose two craft beers from the long list of choices. Both were great and ice cold.

The service was top-notch—not just friendly but sincere and smart. Quick, too. We wanted for nothing.

None of the desserts are made in-house but we ordered the chocolate molten lava cake ($4) anyway. It was good but not great.

Fini's Landing could easily become part of our dining rotation. It's hard to argue with tasty food, ice cold beer and a laid-back vibe. Now if they could only figure out a way to bring the ocean a little closer.

Five Great Things to Do in Tucson Today: Tuesday Jan. 29

Grab Your Gear and Fish at Agua Caliente Park 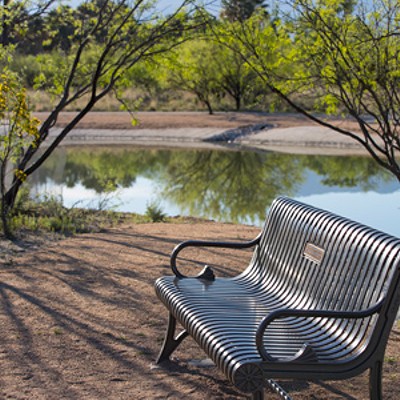