A Beautiful Day in the Neighborhood explores the magic of Mr. Rogers 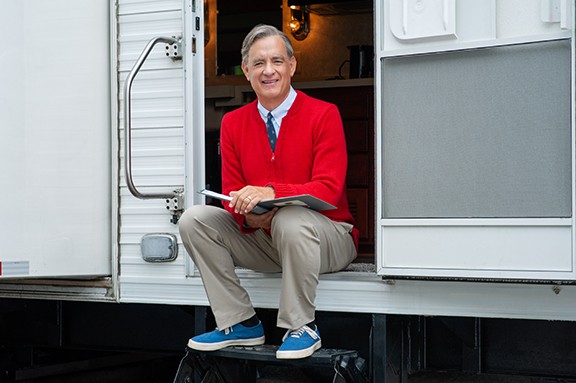 Lacey Terrell / Sony Pictures Entertainnment
Based on a real life friendship between Fred Rogers and journalist Tom Junod, A Beautiful Day in the Neighborhood is a beautiful film. Whimsical, sweet, complicated and full of warmth, just like that polite guy who used to put on his cardigan and sneakers for little children for many years on PBS.

Who plays Fred "Mister Rogers" Rogers in this movie? Why Tom Hanks, of course. You don't get more perfect casting than the world's most likeable actor playing one of history's most likeable guys. The recent reveal that Hanks is an actual sixth cousin of Rogers is no surprise.

Hanks plays Rogers in an honorable way. He doesn't impersonate the man so much as adapt some of his mannerisms, his winning smile, and that slow, concerned cadence in his voice. The performance stands as a terrific homage to a wonderful person.

But Fred Rogers is a supporting player (albeit a mighty important and present one) in director Marielle Heller's (Can You Ever Forgive Me?) heartfelt movie. The main protagonist is Lloyd Vogel (Matthew Rhys of The Americans), a troubled journalist who grumbles upon getting an assignment to do a profile on the PBS icon—the guy with a "hokey" TV show for Esquire Magazine.

The two meet at first on the phone, but Lloyd eventually journeys to WQED in Pittsburgh, home of the beloved TV show, to see the master in action. Rogers instantly starts interviewing the journalist as much as the journalist is interviewing him, and Lloyd bristles at first. Over the course of the film, Rogers and Lloyd become friends, and Rogers helps Lloyd in his dealings with a dying father (a mightily good Chris Cooper), his wife Andrea (Susan Kelechi Watson of This is Us) and his newborn son.

Heller brilliantly frames her film as an episode of the TV show, starting with Hanks delivering the infamous welcoming song, and then introducing Lloyd Vogel as a friend who needs help. As the characters travel between different cities, the cities are depicted like the train sets that had a presence throughout the TV show. It truly does give the sense that an episode of Neighborhood is playing out.

There is no evidence of the father-son relationship at the center of this film in Tom Junod's original article, "Can You Say...Hero?" Junod himself admits that he never got in a punch up at a sister's wedding, a prominent event near the film's beginning. Fictional or not, the handling of the father-son relationship in this movie is heart wrenchingly good, and Junod has acknowledged that the friendship Heller displays in her movie is much like the one he had with Rogers.

As an adult, I have a new appreciation for Fred Rogers. He always weirded me out when I was a kid, a kid who was more interested in being entertained by The Electric Company and Sesame Street than by the guy with the sweater. Still, I did watch a lot of his shows before and after my favorites and, in retrospect, I realize that Mister Rogers taught me more about life and my fellow human beings than any of those other children's shows ever did.

I think there are going to be a lot of people who feel the same way after seeing this movie. It's going to open up a few doors in your heads and hearts, and even make you cry a bit. It's going to make you love Tom Hanks even more than you do now, if that's even possible. And it's going to fortify your precious remembrance of Fred Rogers, the sweet guy in the sweater who talked right at you from the TV screen, be it with his haggard puppets or ever-present smile.

Yeah, the movie messes with you a bit. But sometimes that's a very good thing.