Heather Hoch
Karuna’s Thai Plate is all about the curry.

Good Thai can be hard to find in Arizona and, truthfully, visiting Karuna's Thai Plate, located off Grant Road just east of Campbell Avenue, is not without its faults. The small restaurant tends to be staffed by one person in the front of the house, and, with the way dishes arrive to the table, it seems just one person in the back of the house as well. While this would normally be a little off-putting in a more upscale environment, Karuna's doesn't seem to be going for that at all. 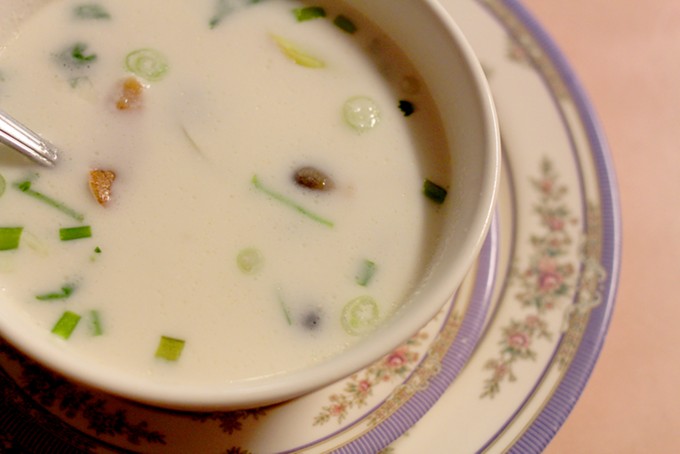 The restaurant carries a lovably divey aesthetic, embellished by traditionally feminine colors and design. The dishes are white with light purple accents, the tables are pink and the menus have artwork depicting a pretty young Thai woman. It's a simple place that serves a combination of classic Thai dishes including all of those favorites (ahem, pad thai) that American diners have come to adopt into their eating repertoire.

That being said, the menu has some clear hits and misses. Starters include expected options like spring rolls, satay chicken, mee krob and more alongside more indulgent fried tofu, fried fish cake and stuffed rice cakes. Karuna's tom kha gai ($7.95), or coconut soup, is a fan favorite here. While the simple, savory coconut broth provides the base to chicken, mushrooms and more, whole kaffir lime leaves and ruddy chunks of lemongrass root provide the necessary flavoring. Should you eat either of those spicing elements, accidentally or intentionally, you'll easily blow out your palate for the rest of the bowl, so watch out. 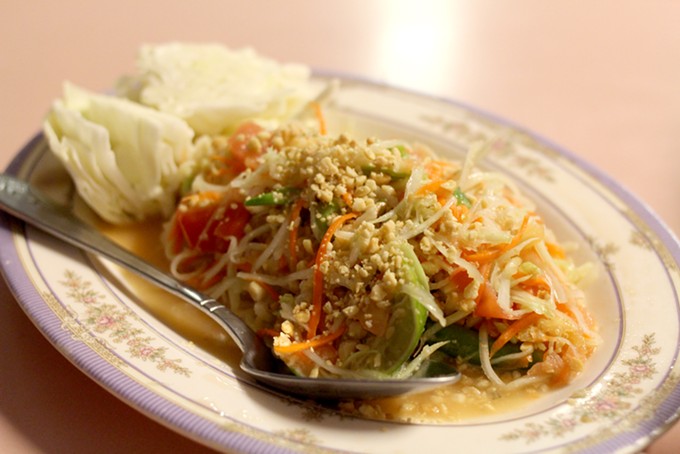 If dining with a friend, consider also the soam tum thai ($5.50) to start. Bright slivered pieces of green papaya mingle in with tomatoes, peanuts, shredded Thai chili and carrots, dressed in a sweet and tangy lime-based dressing. The lighter dish is a good place to start if you plan on opting for any of the heavier noodle dishes for your main course.

However, if you're looking for noodles, the rahd nah ($7.25) might not be the best choice. The thick, flat rice noodles sit on the bottom of the plate with a layer of corn starch thickened sweet gravy, topped with your choice of meat and broccoli. Eating it, I couldn't help but wonder what the dish would've been like if that gravy was tossed with the noodles before it was plated—maybe the noodles wouldn't have clumped together. Who knows?

What Karuna's really excels at, though, is curry. For $7.50 you get a bowlful of any of the eight different aromatic curries Karuna's has to offer, along with a bowl of fluffy, sticky white rice. It's enough food for two meals easily with an insanely reasonable price tag.

The green curry, ordered spicy, quickly became the favorite on the menu, especially with fatty hunks of pork added in. Even the pineapple gang kua impressed in the flavor of the curry itself, despite some hiccups in ordering. First, I didn't have any pineapple in my curry, which seemed odd. But, there was one recurring curiosity at Karuna's that became less excusable the more I visited.

On the menu, there are several places roasted duck is advertised, that pineapple curry being one such place. Unfortunately, ordering duck in any of those dishes always garners the same response: "No duck." It became clear that either I am a terribly unlucky duck when it comes to ordering there or the restaurant just doesn't serve that bird anymore, regardless of what the menu says.

I'd typically give the benefit of the doubt here, but on one visit they were out of Thai tea and during another visit they were out of barbecue pork (it took about 20 minutes after ordering it for the server to break the news to me). Unlike the duck, both were back on the menu during subsequent visits. So, fowl fans, it seems you won't get your duck fix at Karuna's.

That 20-minute wait time is pretty standard dining in at Karuna's. Simply put, service is slow with just one server, and dishes come out of the kitchen one at a time with considerable lapses between them, which is why I assumed there's only one cook at any given time. Kitchen delays aside, my friend had to request water several times before she actually was poured a glass.

While all of that might amount to what seems like an outright condemnation of Karuna's, I really don't see it that way. Sure, there are several ways this spot could improve, but I think going there is all about knowing what to get and how to get it. My advice? Call in an order for green curry with pork, pick it up and take it home (or wherever you like to eat), and you'll likely enjoy the food, price point and overall experience of this little Thai joint. It seemed while dining in that about twice as many customers chose the takeout option and it became clear that there was a reason for it.