Johnny Depp rocks as a Western sheriff/lizard in 'Rango'

Daliesque dream sequences, existential conversations between an armadillo and a lizard, and hat-tips to Hunter S. Thompson are not staples of the Western genre, and yet here is Rango, an animated Western-themed comedy that is more in love with Sergio Leone than Walt Disney.

Of course, there have been treatments of the Western that aren't cut from the usual cloth, and not just gems like Billy the Kid vs. Dracula or, dare we say it, Jonah Hex. High Plains Drifter, McCabe and Mrs. Miller, the cult classic El Topo, the recent Seraphim Falls and The Proposition, and many other films add layers to the genre that it really needs, if only to illustrate that good and bad isn't as black and white as the color of the 10-gallon hats.

While Rango almost certainly won't be taken seriously on these terms, its story works as a Western blueprint, and it invites all of the usual characters (in talking-animal form) that would be right at home in, say, the town of Rock Ridge from Blazing Saddles. The local sheriff happens to be a chameleon (the voice of Johnny Depp) who builds his own legend on his first day in town in order to blend in. The town is called Dirt, and that's about all there is to Dirt. Every Wednesday at high noon, the residents get water, but even that's running out.

The legend built by the newcomer involves killing seven outlaws—with one bullet. He adopts the name Rango, stumbles Inspector Clouseau-style into a victory over the hawk that torments the townsfolk, and is handed a badge by the power-hungry mayor (Ned Beatty), the turtle who controls the water-rationing. Rango takes an immediate liking to Beans (Isla Fisher), a quirky lizard trying to keep her daddy's farm (a dirt farm, one presumes) in the family and away from the mayor. It's the last lot in all of Dirt that he doesn't own.

With the stage set, director Gore Verbinski (Pirates of the Caribbean) and writer John Logan (The Aviator) begin to turn the genre in on itself through comedy and odd pop-culture references. Verbinski also approaches the animation in a fresh way. In addition to an almost uncanny photorealism, Rango was enacted on a stage by the full cast, instead of by individual actors recording their dialogue in an isolated sound booth. Verbinski filmed them as he would any live-action motion picture and used the expressions of the actors to inform the computer animation.

Outside of the animation, the best that can be said of Rango is that it confidently takes risks. In an arena dominated by family-friendly 80-minute cartoons, most of which dumb it down for greater profits, here is a film that is gleefully bizarre, provides almost no immediate frame of reference for anyone born this century, and has a genuine dark side, albeit a darkly comic one.

To make a film like this pay off, Verbinski needs an actor somewhere in the vicinity of the biggest movie star in the world. It isn't just Johnny Depp's name above the title, though; Depp puts in the hours, develops a real character and makes the case that nobody else could play the part quite like him. While the rest of the voice cast—including Bill Nighy, Harry Dean Stanton and Abigail Breslin—is very good, this Western, like so many others, depends primarily on the hero. And Johnny Depp takes dead aim.

Rango is not showing in any theaters in the area. 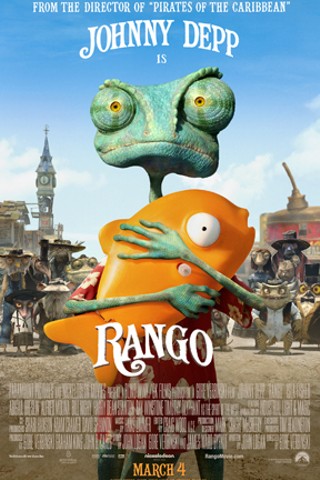