There's a glorious moment in Jackass 3-D that might qualify as my favorite Jackass moment ever, and it isn't even a stunt.

It involves the great Johnny Knoxville doing a crazy/goofy dance in a pink sweater before some buffalo run him over. Yes, the payoff moment when he gets trampled is golden, but the moment before, where he throws down some joyously oddball dance moves, is priceless.

Knoxville's little dance number perfectly encapsulates the gonzo, jubilant spirit of this simultaneously asinine and brilliant franchise. It also shows that he doesn't have to destroy himself to get me laughing, although I do appreciate his willingness to get crushed and pummeled for my entertainment pleasure. For 94 minutes in Jackass 3-D, Knoxville and his cronies, including the incredibly brave Steve-O, Bam Margera and Wee Man, expose themselves to all forms of physical and emotional trauma, and it's often remarkable stuff.

As the movie's title implies, the action takes place in 3-D this time out. While the new technology doesn't feel necessary for many of the stunts, there are precious moments where it's very much worth the extra bucks you pay for the funny glasses. Chief among them would be Steve-O's "Poo Cocktail Supreme," where he bungees above the Earth inside a Porta-Potty, getting doused with mounds of collected dog shit. And, of course, Steve-O pukes in your face through the cascading dog feces, making the event that much more memorable.

The 3-D also complements the movie's occasional reliance on slo-mo very well. Bam has come up with a new stunt where he distracts a victim by splashing water on one side of their face then blasts them with a boxing glove on the other side. Watching the punched faces in slow motion, with the extra depth of field, is quite the splendid special effect. Seriously, facial parts shake and move in a fashion that no computer-effects wizard could ever re-create.

Knoxville is still the craziest guy in the bunch when it comes to physical trauma. Steve-O takes the prize for willingness to consume and be covered by foul substances, but it is Knoxville who is most willing to stand in a pen where buffalos are ready to rampage and bulls are ready to charge. A sequence where he takes professional football hits is inarguably nuts. The guy is deranged.

Knoxville even allows a rather spirited dog to bite his ass as he hangs from a pole. As a paramedic attends to his bite wounds, he postulates that his butt was better prepared in this film due to the addition of lunges and squats to his exercise regimen. The paramedic attending to his bloody ass looks as if she agrees.

While Chris Pontius and his mighty penis get plenty of play, Party Boy, his thong-wearing, public-dancing alter ego, never makes an appearance. A Jackass movie with no Party Boy is like a milkshake without ice cream. Bad call! Although, I would like to congratulate Pontius on the wonders of his golfball-hitting, wholly intimidating penis. Thank your mama and your papa for supplying you with that thing, because you are a very lucky man.

A final credit sequence where we see the cast in younger times through stills and archival footage implies that this could be the end for the current Jackass crew (Knoxville will hit 40 in March). Perhaps they could pass the torch to a newer, younger brood while they stand on the sidelines cackling at them, submitting themselves to the occasional mental or emotional humiliation, while perhaps letting up on the physical trauma. The human body can only take so much, and Knoxville probably hit his logical limit 15 years ago.

Seriously, if they got a new crew together, and Knoxville preceded each of their stunts with his pink sweater dance, I'd happily pay to see it. And, let's face it, Steve-O could drink fat-man sweat until he's in his 70s or 80s, so I hope they find a way to keep Jackass going well past this film.

Jackass 3D is not showing in any theaters in the area. 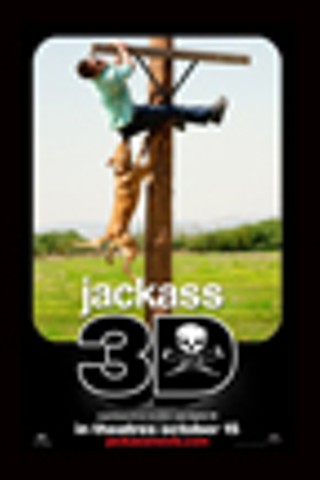