Calexico once again teams up with Iron & Wine’s Sam Beam 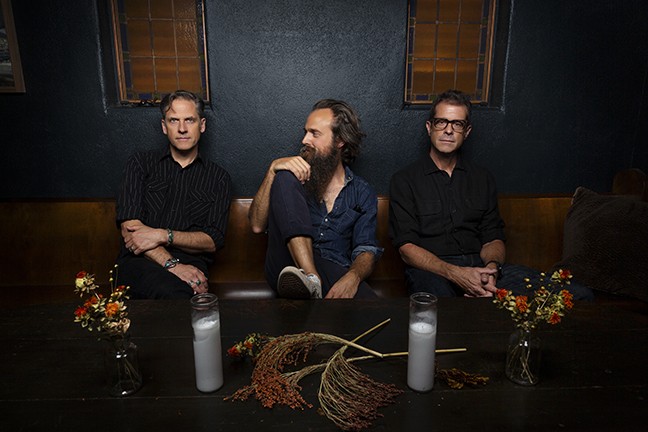 It's been 14 years since Calexico first teamed up with Iron & Wine's Sam Beam to record the critically acclaimed In the Reins EP in 2005, so a reunion of the two indie acts was long overdue.

Just before Christmas last year, the founding members of Calexico, guitarists and vocalist Joey Burns and drummer John Convertino, traveled to Nashville along with trumpet player Jacob Valenzuela to join Beam and two of his regular contributors, pianist Rob Burger and bassist Sebastian Steinberg. Paul Niehaus, a Nashville session player who has performed with both bands, also stopped by to play pedal steel guitar on several tracks.

The result is Years to Burn, an eight-song album that drops Friday, June 14, via Sub Pop Records. The album is a showcase of experienced musicians at the top of their game. NPR music writer Stephen Thompson says the record finds "Sam Beam, John Convertino, Joey Burns and members of the extended Calexico and Iron & Wine casts at their loose-limbed best. Beam, now an old hand at lavish and soulful arrangements, performs here with maximum smoothness, while Burns and Convertino lean hard into Beam's mix of warmth and melancholy. They all sound comfortable, collaborating deep in the pocket, but they're still exploring."

Years To Burn opens with an alt-soul tune, "What Heaven's Left," and closes with "In Your Own Time," wrapping the album with a country sound. In between, the musicians sink into a range of styles from jazzy jamming to Lat-indie. (See the Weekly's review on Page 11.)

Burns says a reunion of the musical collectives was a matter of finding the right time to make it work.

"It's always kind of been at the back of everyone's minds," Burns says. "Of course everyone's been pretty busy. So, it was just a matter of finding that right window to jump back in."

Beam likewise said he was eager to work with Calexico again, so he was delighted when the opportunity finally came along. Burns and Convertino are among his favorite collaborators.

"I'm a songwriter who sort of gathers different kinds of musicians to help me say musically what I want to say," Beam says. "Joey and John can kind of say anything, which is really fun and rare, but they also have their own unique sound, which is also really empowering. They're so sweet and positive people. That experience we had several years ago was really transformative to me. They were always collaborators that I always wanted to spend more time with."

For Burns, working with other musicians is what making music is all about.

"I really rely on that spirit of collaboration, and being together in the moment to finish things, and bounce ideas off of, and then make a song, finish a song," Burns says. "That's why I really enjoy working with John because I like that comradery, and I love the social aspect of music."

Despite the long gap between recordings, Convertino says it was easy to pick up where they left off.

"It all comes together pretty easy with Sam, and the momentum of recording and mixing happens without a lot of deliberation," Convertino says "It's like he has it all figured out in advance. Right from the get go I felt like we were all on the same page."

One thing Convertino wanted to do differently this time out: Find some time to improvise with the new mix of musicians. During the In the Reins recording sessions, there wasn't time to experiment, but the songs evolved on the tour.

"When we brought those songs out on the road, some of them stretched a little, and it felt good to improvise with Sam, and his songs lend themselves to that, so I thought it would be cool if we just started a dialogue, and see where it went," Convertino says.

Beam says he enjoyed the opportunity to explore and stretch as well.

"That's definitely become part of what I am looking for in a group, that kind of conversation and that kind of trust," Beam says. "Over the years, it's become much more important to me. John is such a sensitive player. I mean, he thrives off of those kinds of things, so it's not surprising and he has a real gift for those kinds of pursuits. Knowing more how these guys worked, it was fun to bring material that I thought played to their strengths a bit more than it did last time."

Calexico and Iron & Wine will support the album with a North American and European tour, including a stop at Tucson's Rialto Theatre on Saturday, Aug. 17. The touring band will include Burns, Convertino and Valenzuela from Calexico, as well as Beam, Burger and Steinberg. They'll play songs from both Years to Burn and In the Reins, along with some special cover songs and a dip into both bands' catalogs.

"The plan is for Sam to choose several Calexico songs to sing, and John, Jacob, and I to choose a couple of Iron & Wine songs to sing and play," Burns says. "So, it's sort of like a swap meet of music and identity."

Convertino says the tour will be a fun change of pace on the road.

"I'm excited about bringing down the tone," Convertino says. "As much as I love the Calexico party, I really am looking forward to an evening that focuses on lyrics and melody."

Beam says he's looking forward to seeing how the songs grow up on the road.

"It's always fun to have a new group of songs," Beam says. "They're born and you get to smell their new baby smell for a little bit. Then you get to live with them and raise them when you get on the road. It's kind of like having a family and raising some kids. I'm really looking forward to seeing where these songs go and getting to spend more time with Joey and John."