Birrieria Guadalajara is great year-round, but truly shines in winter 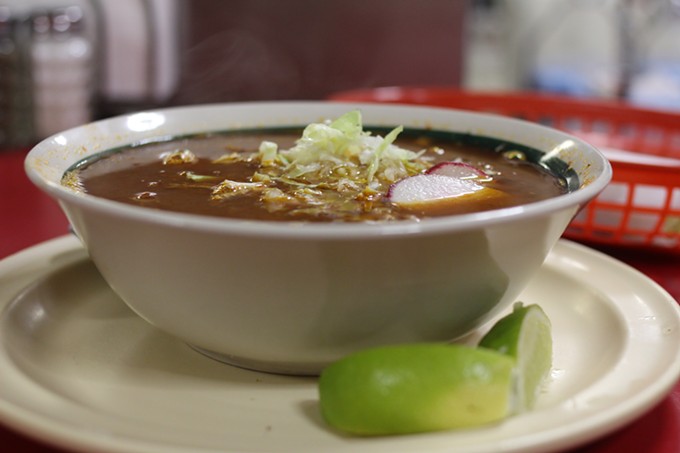 Heather Hoch
Whether in a soup, on a taco or in a burrito, the birria at Birrieria Guadalajara really steals the show. Heather Hoch
Quite possibly the best signage in town—and in Tucson that's saying something.

I can't help but roll my eyes anytime I see one of those lists that set aside, inventory and rate women in a particular industry. I'd even go so far as to say that I'd be interested in seeing what would happen if the men and women's soccer teams were blended—maybe then the U.S. team would have a shot competitively when it comes to what people actually watch, but I digress.

In the food and beverage industry, which has been male-dominated in the back of the house since forever, people love to make lists of female chefs and the like—proving that hey, there are some. It's really ground-breaking stuff. Also, it gives writers the opportunity to cram all of the talented women in the industry into one list, allowing them to ignore their strides the rest of the year.

I look at a restaurant like Birrieria Guadalajara, which runs with three women in the kitchen and occasionally an additional to help take orders, and I see the antidote to that sort of pandering. I see those three women working hard, kicking ass at what they do and making some of the most consistently delicious, yet accessible (in price as much as content) food in town.

Upon arrival, you're met with a little part-indoor, part-outdoor stand, which is painted a shade of orange that has to be a relic from the '70s. On the patio and near the counter inside, you'll find other bits of the past—brightly-colored and hand-painted signage, wood paneling and red vinyl-topped bar stools. It might seem a little dingy, but that's all part of the space's interminable charm. This isn't a "restaurant concept," after all. Plus, I've never felt the table, counter surfaces or any of the plates or cutlery were unclean, and that's what really matters.

I've heard a couple warnings about the birrieria before going. People say the service is bad and they also say to bring cash. On the first point, I've found that this is absolutely the opposite of the truth, though I will admit the staff's English seems limited. (But, we all realize there's a difference between English being your second language and being rude, right? Great, I thought so.) On the second point, it's true: Birrieria Guadalajara is cash only. It isn't exactly convenient, but it is worth the stop at the neighboring Quik Mart to pull some cash out.

Once you're properly cashed up, you can begin exploring the menu, which spans breakfast, lunch, dinner, dessert and even large family-style take-away options with heaps of your meat of choice, tortillas, salsa, beans and more.

Breakfast offerings include hot cakes ($2.50), huevos rancheros ($6.50) and scrambled eggs with your choice of chorizo, machaca, tocino or jamon mixed in as a burro or plate, served with beans, a tortilla and hash browns ($6.50 to $7.50). The straightforward, filling breakfast options start the day off right, delivering hearty portions of just what you'd expect.

With combo plates and daily specials posted, the range of lunch and dinner options at Birrieria Guadalajara are too numerous to list. Enchiladas, Tuesday-only albondigas, chiles rellenos, camarones empanizados (fried shrimp) and more are offered. Flautas ($5.75) come crispy, topped with crema and filled with meat or potatoes, of which the latter is a comfort-food ideal. Birrieria also offers a Torta Cubana ($5.95)—inspired by, but not a replica of, a Cuban sandwich that comes on a soft bolillo in this instance.

On the markedly less colorful signs across the counter, you'll find the restaurant's carne y papas, as it were: tacos, burritos, chimichangas, tostadas and sopas. Options include, of course, birria, but also juicy cabeza, carne asada, pollo, pescado, red chile and lengua. The lengua at Birrieria is prepared at the intersection of cabeza and carne asada, with large grilled chunks of meat still retaining juiciness—it's definitely among the best I've tried and goes well with beans atop a tostada (two for $5.50). To kick your tostada (or anything, really) up a notch, smother it in the house salsa, which offers a hefty dose of chile de arbol and vinegar and comes at the table in a squeeze bottle.

In terms of the restaurant's namesake, birria is a fine choice for your triplet of tacos, but the meat is much better in its bright red caldo (I recommend the cabeza for taco purposes instead.). The spiced, salty and oily birria stew ($5.95) is reason enough for me to pull money out of the ATM. In fact, the restaurant offers a range of spectacular soup options, including daily specials like fish soup on Fridays, cocido on Wednesdays and pozole, menudo and caldo de queso daily.

While I will eat soup all day every day any time of year, there's something special about sitting at the Birrieria Guadalajara counter on a cold night and cradling your soup in one hand, while using the other to eat. It's in the winter, too, that this little Mexican joint offers tamales and champurrado ($1.75). If you're new to the champurrado game, you can expect creamy hot chocolate, thickened with corn flour and flavored with additional spices and piloncillo for sweetness.

As the cold nights wane into the impending spring (read: summer-lite), make sure you take the time to soak in the season. There's no better place than at Birrieria Guadalajara, surrounded by your good friends: birria and champurrado. It'll be the most satisfying $8 you spend this winter.