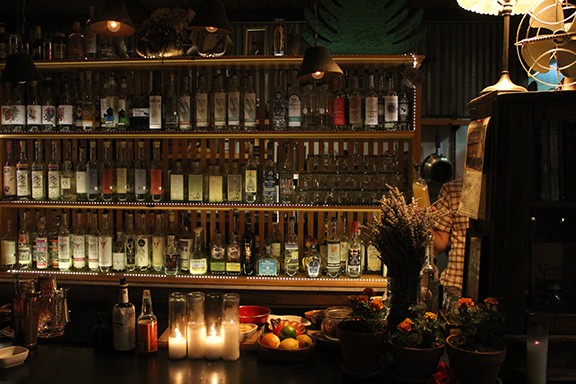 "It's a natural expansion, and it's a way to get deeper," Smith says. "It's a way for me to enhance the instructive part of the public tastings... They tend to be quite well attended, sometimes maybe too well attended that it can be difficult to hear me. A group of 12 or less allows me to be the educator I want to be when it comes to mezcal."

The tastings, where participants receive four mezcal pours, are always based on a central theme, like agave species, distillation location or varietal. Smith, who earned a Ph.D. in cultural and social anthropology from Stanford University, uses the events to discuss not only the production of mezcal, but the families and farmers who craft the drink.

"It can get pretty nerdy, to be honest," Smith says.

While Smith won't claim the title of founding Tucson's first "mezcaleria," he is proud to say nowhere else in town has as expansive an inventory or amount of information about the Mexican staple. He says it's important that the bar offer other options, such as beer and wine, but 90 percent of the bar is focused on mezcal. The amount of mezcals at El Crisol fluctuates, but they currently house more than 150 types.

"A really good mezcaleria, by my estimation, is there to pour almost an infinite variety of mezcals, and also be able to talk about them all," Smith says. "I think mezcal is the artisanal spirit par excellence. It's more labor intensive than anything else I can think of. It requires a great deal of knowledge that is passed from generation to generation. It is extremely hands on. I can't think of anything more handcrafted than mezcal. This is a very microfocused kind of thing. It's placed-based, it's family-based, and it's always small batch."

The new name, El Crisol, is based on the Spanish word crucible, or melting pot. Exo's staff selected this name because they view mezcal like the result of a crucible: the product of many things coming together, interacting with fire, and resulting in a powerful, refined product.

"Exo has become so associated with coffee, that to this day even though the bar has been open for two years, people come in and say 'I had no idea this was here.' So I wanted to give the mezcaleria a distinct identity away from coffee," Smith says. "I wanted to make Exo in the day and Exo in the night their own complementary programs and scenes."

While Exo Roast's coffee and El Crisol's mezcal can attract different audiences, Smith says they're actually quite similar products; they're both grown and exported by Mexican farmers, and in Oaxaca, which Smith visits two to three times a year, they're even fused into specialty cocktails.

"The story of mezcal really is beautiful. Once you know the story, and you're educated about what you're drinking, then the experience is much more rich. So a good mezcaleria is half about education," Smith says. "The tastings are as much about the story of mezcal as they are about tasting mezcal. It's as comprehensive as we can get it here. And I think the heart and soul of a mezcaleria is all about that."