Into The Youniverse: An Afternoon At the Selfie Museum and A Defense of Vanity 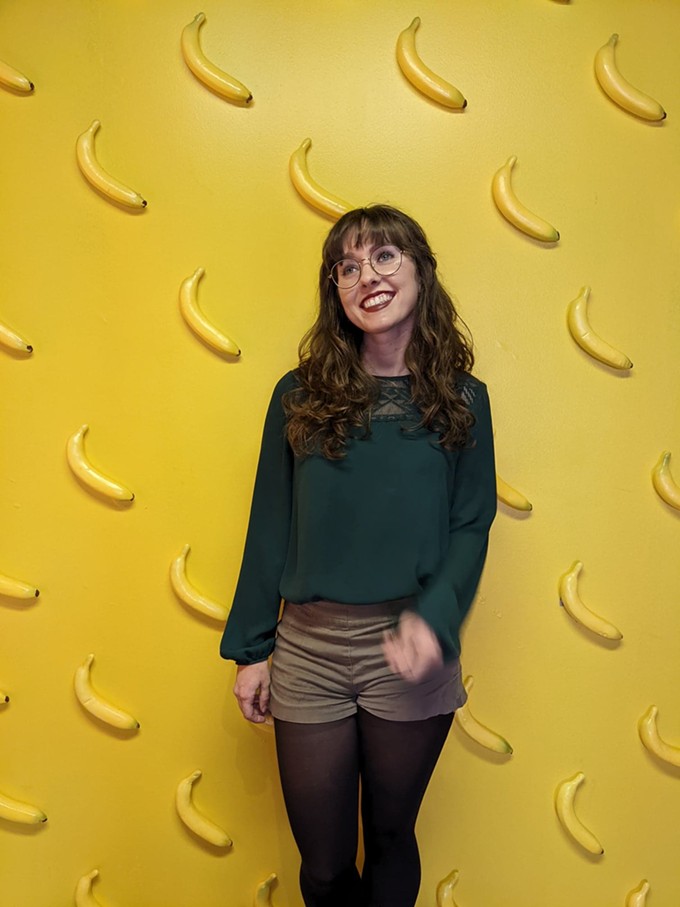 Once, while visiting a real, live castle in Spain, where there were gorgeous gardens and art around every corner, I watched one woman find the plainest wall she could, then pose in front of it for a series of pictures with her Starbucks cup. At a castle! I don’t have a fully formed opinion about whether a castle is the place for vanity, but if I do think if you’re going to be vain there, it should at least be in front of a decadent backdrop.

Some of the rules around when it’s socially acceptable to take a selfie are clear cut, while others have blurrier borders. In the middle of a professional meeting? Not the time. The few minutes before the Zoom meeting starts when you’re waiting for the other people to arrive and realizing you look good in this lighting? Probably fine? A selfie museum? Definitely.

At Youniverse Tucson, you—combined with backdrops and ring lights set up specifically for personal photoshoots— are the art. Started by brothers Ian and Connor Franulovich, who also own a rage room called the Breaking Point, this self-serve studio is a place you go to feel good about how you look, and to document it. Vanity is the whole point.

I appreciated this clear-cut purpose. No one in the museum was going to roll their eyes at me for taking a selfie in a public place. (Though, I know the decision to visit a selfie museum might exhibit its own brand of eye roll. To that, I say: The world is full of difficulties and horrors, and sometimes there’s nothing any of us can do to stop them. If any people can find a single speck of joy in a harmless activity like taking a selfie, I hope they do.)

As a millennial woman, I’ve watched my selfie skills evolve along with their rise in popularity. With my first digital camera in middle school, I took countless crooked, poorly cropped photos of me wearing a fedora next to my dresser. These days, on the rare occasion I go through the trouble to put on lipstick, I like to commemorate it with a selfie, simply for my personal records.

I’m also familiar with the reputation of selfies, which sometimes seem like they’ve come to represent the vapidity of a generation. Over the years, we’ve heard that selfies are a reflection of everything from eating disorders to narcissism.

I’m not a scientist or a time traveler or a selfie expert, but I get the feeling if people 30 years ago, or 500 years ago, had access to front-facing cameras, they would have been taking selfies too. Those with the means were certainly having portraits painted of themselves, or snapped in professional studios, after all. Now, that form of capturing a moment is more accessible.

And the Franuloviches, who built all four dozen sets in the museum and opened it in September 2021, think that’s great.

“I think everybody should have access to good pictures of themselves, or their family and their friends,” Connor told me. “It’s just a super fulfilling business.”

The basement area of Youniverse features about a dozen horror sets, including scenes from The Walking Dead, Sweeney Todd and Saw. The upstairs levels are more “Instagram Influencer.” Strings of twinkly lights hang down in an all-white space. A wall covered in license plates is right next to another covered in cloud-like cotton. Take a picture in a jungle, inside giant Barbie and Ken boxes, or next to a sign that says “Bitch, Don’t Kill My Vibe” in neon cursive.

I visited Youniverse with my mom while she was in town for the weekend, so most of our individual photos weren’t selfies in the purest sense of the word. She got one of me in front of a yellow backdrop that I think might work as a professional headshot. I got one of her in sunflower-bedecked bathtub and told her, “You look so cute!” She looked at it and said, “I kind of do!” It was precious to hear her sound so confident.

The ring lights at every station meant we could set up our phone timers to get photos of us together too. It’s not often we’re both dressed up and able to capture ourselves in a picture together, so these are photos I’ll treasure. There’s one of us holding giant crayons that I am honestly considering framing, and a few of us posing for fake mugshots that had us cracking up.

Viva la selfie, I say! If it’s your thing, grab a friend, grab your mom, grab your partner or, of course, just grab yourself, and spend an afternoon capturing photos. And don’t, as the neon sign will remind you when you walk in, let anyone kill your vibe.

Youniverse Tucson is located at 5750 E. Broadway Blvd, and tickets are $25 per person. Hours are noon to 8 p.m. Wednesday through Sunday, and the tickets have no time limit.