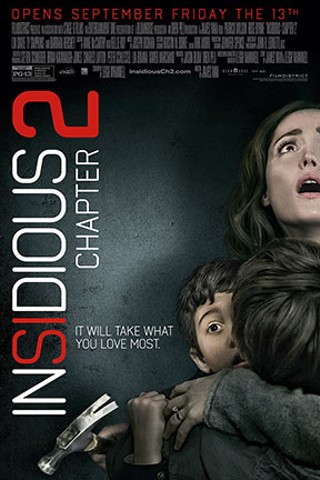 Director James Wan was on a bit of a roll with the first film in this series and his recent The Conjuring. That roll doesn’t simply come to a halt with this film. That roll crashes into a concrete, steel-enforced wall that Jesus himself built while reminiscing about his carpentry days. This latest attempt to make a haunted house movie with next to no money is a hilarious catastrophe. Wan basically uses the same tricks, including smoke machines, green lights and crappy music, to try and get scares out of a formula that clearly had a short shelf life. This one involves Josh (Patrick Wilson), the father from the first film acting a little strange after his trip into another dimension to retrieve his son. His wife (Rose Byrne) suspects that, gosh darn it, something must be wrong because there are still funny things happening with her baby monitor. The movie wants to be a poor man’s The Shining, with Wilson going all Nicholson wacky and Byrne doing her best Shelley Duvall impersonation. It’s terrible, but it’s a big moneymaker, so, as with the Paranormal Activity films, this isn’t going to stop anytime soon.
By Bob Grimm

Insidious: Chapter 2 is not showing in any theaters in the area.