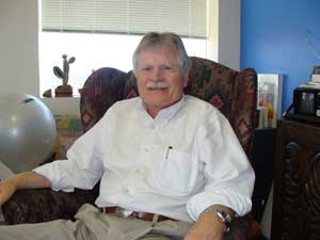 Mari Herreras
Bill Risner: "No one has ever looked (at these other counties), and we wanted them to know somebody is going to look."
Pima County stood apart from the rest of the state's 15 counties as it dealt with a public-records request filed by the Pima County Democratic Party almost two years ago. That request eventually developed into a lawsuit that cost the county hundreds of thousands of dollars in attorney's fees.

The successful lawsuit, filed by the party in 2007, ended with Pima County Superior Court Judge Michael Miller ruling that electronic election-database files going back to 1998 were indeed public records. Copies were eventually handed over to party officials for analysis.

Pima County, however, now has some company, thanks to a new public-records request filed by the Arizona State Democratic Party. The request went to all Arizona county-election departments and asked for copies of the 2008 electronic election-database files.

In an interview with the Weekly, Kanefield says his e-mail was meant to remind county elections officials that although the Pima County Superior Court ruled electronic database files were public records, that decision is not binding on other county election departments.

Kanefield wrote: "We do not believe it was in the best interest of the state for Pima County to release this data because it resulted in the publication of sensitive information upon which future elections will be built in all counties using this equipment, thereby decreasing the overall security of our elections statewide. Nevertheless, the information was released and therefore the security breach has already occurred. Thus, we take no position on the further release of this information in your counties at this time. We only note that the Pima County Superior Court decision is not binding on your counties and that you should consult with your county attorney before releasing the information in response to the public records request."

Technically, Kanefield is right, says Bill Risner, the Pima County Democratic Party attorney who led the public-records lawsuit against the county. The win in Pima County does not create a binding legal precedent--but it will be interesting to see how various counties determine whether the database files are public records, he says.

"How can you argue that they are not public records?" Risner asks.

Kanefield said it was that letter from Risner that confused some county elections officials. "The state (party) is citing the Pima County decision. ... What we told them first is to consult with their county attorneys and to remember that the Superior Court decision is not binding," Kanefield says.

According to a deposition of Kanefield taken in April for the Pima County lawsuit, the Secretary of State's Office doesn't have the legal authority to examine any of the county databases--although the office certifies all election equipment and cites its elections procedures as the legal manual for all counties to use to run proper elections.

Risner wrote in the letter to the county election directors: "Since the Secretary of State's position is that her office has no authority to examine election databases, it becomes even more critical that the duly designated political parties act to do their duty under the law of the state of Arizona. If political parties do not, no one will be monitoring this most important information."

Kanefield was originally called as a witness for Pima County to determine whether the release of the database files would violate state statutes--one reason why the county initially determined the files were not public records. Instead of defending the county's position, Kanefield said: "... (R)eleasing the information that we (the state) possess would violate the statue, but I'm not prepared to state that releasing the information they (the county) possess violates the statute. I'll let the court decide that question," Kanefield said in his deposition.

In addition to the county releasing the files as ordered by Miller, Pima County Administrator Chuck Huckelberry authorized dozens of changes in county elections procedures, mostly as recommended by the Pima County Democratic Party--changes applauded by elections integrity activists and vehemently challenged by the Secretary of State's Office.

In a series of letters to Huckelberry and the Pima County Board of Supervisors, Secretary of State Jan Brewer pummeled the county for releasing the database files and for agreeing to not use modems to transfer election results from outlying communities. Most recently, Brewer blasted Pima County for looking at alternatives to the technically troubled touch-screen machines that accommodate disabled voters.

So far, Risner says he has fielded calls from Yuma and Pinal counties regarding the public-records request, but no one has yet sent any database files. Are lawsuits in the future if some counties refuse to release the records? Risner says that hasn't been determined .

Allen Tempert, elections director for Mohave County, told the Weekly his county has yet to make a decision on the request.

"Our legal department is still looking at it," he says. "I can't say what we will do or likely do until our attorneys provide us with options."

Tempert and other elections directors may keep the results of the Pima County lawsuit in mind, since state law requires counties and other agencies to pay attorney's fees in a public-records lawsuit win. Pima County ended up paying Risner more than $250,000 in fees.

Risner says this latest request wasn't made as a mechanism to collect attorney's fees, but to expand how the Democratic Party observes elections tabulated by a computer.

"No one has ever looked (at these other counties), and we wanted them to know somebody is going to look," Risner says.