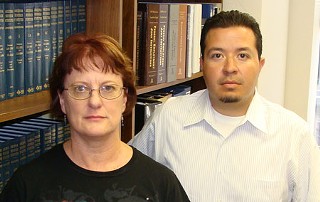 Mari Herreras
The Arizona Center for Disability Law's JoAnn Sheperd and J.J. Rico are prepared to file another lawsuit against the DES if the state moves to cut early-intervention funding.

Vanessa West was understandably overwhelmed when she found out that her newborn daughter, Arianna, was born with a heart defect, lung disease, a compromised immune system and other serious problems.

Now at age 2, Arianna has an occupational and speech therapist, as well as physical therapists who were assigned to help her improve her motor skills following heart surgery at 6 months old.

Despite all of this, West said she is lucky. Yes, lucky: Through the Arizona Early Intervention Program (AzEIP), Arianna was able to receive special-needs services from the state.

"I knew with this program, she was going to get all the help she needed," West said.

However, West found out from her state-service coordinator earlier this year that the services that she and Arianna have greatly relied upon were going to be discontinued, thanks to state budget cuts.

"It definitely freaked me out," she said. "They helped me so much ... It's because of these services that (Arianna) is doing so well. It was disbelief."

Almost 3,100 families received letters from the Department of Economic Security at the time alerting them that special-needs services for their children would be reduced or discontinued due to the state budget cuts announced in February.

The cuts were the direct result of efforts the state Legislature and Gov. Jan Brewer made to balance the budget for the fiscal year which ends on June 30.

In response to the cuts, the Arizona Center for Disability Law, a nonprofit public-interest legal agency, filed a class-action lawsuit on April 15 against the Department of Economic Security, claiming that the state was discontinuing mandatory services in violation of state and federal laws, as well as the United States Constitution.

"We feel these are very essential services required by law. ... The state of Arizona has taken a pretty radical step by cutting these services," said Center for Disability Law Attorney J.J. Rico, one of the two lead lawyers in the case, at the time.

The second lead attorney, JoAnn Sheperd, added: "We feel these children are being unlawfully denied services that are an entitlement."

AzEIP is a statewide program which provides support and services to families with children up to the age of 3 with developmental delays or disabilities such as autism and cerebral palsy.

The program was in line with the federal Individuals With Disabilities Education Act, which requires the state to provide early-intervention services that will allow children the opportunity to reach the level of their peers and/or learn to adapt to their disability. The goals are to avoid possible institutionalization and reduce the costs to the education system in the future. Every state in the country provides these services, according to the Arizona Center for Disability Law.

After the center filed the lawsuit, the state did a turnaround and re-established funding for AzEIP through June 30. What happens after that depends on the new state budget that legislators and the governor are currently haggling over.

"What happens after June 30, we don't know, and the state has put before the court (that) they don't know, either," Rico said.

However, Rico said that not all clients are receiving full services. One child in particular, he said, only receives speech therapy once a month, although she needs this service more often.

Rico's lawsuit remains in a holding pattern until the state releases its new budget.

"Our hope is that the Legislature funds early-intervention services like they are federally obligated to do," he said.

The center is representing three clients as part of the current lawsuit, but Rico said his office has received more than 20 calls from concerned parents about how to handle possible AzEIP cuts.

"If you don't (offer early-intervention services) now, the state will have to pay for it later. The goal of these services is to assist them now," Rico said.

Meanwhile, Vanessa West, who assists at a support center for children with congenital heart disease called Mended Little Hearts of Tucson, said her decision to be represented in the lawsuit was not hard.

"It was something that I wanted to get involved in," she explained. "It was kind of scary. ... (But) I believe with all my heart that someone needs to step up and do something, and after the initial fear of, 'It's a lawsuit,' I was all for it," she said.

West remains concerned about the potential loss of services.

Mari Herreras contributed to this story.