You’ll be stuck to your seat for Spider-Man: Into the Spider-Verse 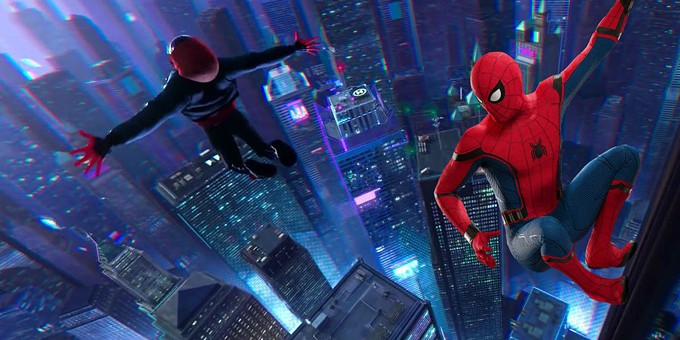 While Tom Holland's live action Spider-Man remains in limbo due to that infamous Thanos finger snap, Sony Pictures ups the ante on the Spidey franchise with the eye-popping, all-around-ingenious Spider-Man: Into the Spider-Verse, one of 2018's greatest cinematic surprises.

While there have been awesome superhero movies, and terrific movies based on comic books, this very well might be the best "comic-book movie" ever made. No movie has ever captured the rush of reading a great, original, exciting comic book like this blast from directors Bob Persichetti, Peter Ramsey and Rodney Rothman. They go for broke with a mixture of visual styles—hand drawn and computer animated—that magically splash across the scene. And the story is pretty great, to boot.

Miles Morales (Shameik Moore) is trying to adjust to a new, upscale school after winning a scholarship. He's away from his big city friends and getting some guff from his well-meaning police officer dad (Brian Tyree Henry), who wants him to appreciate the chance he's been given. Miles's uncle (the ever busy Mahershala Ali) keeps him grounded, encouraging him to continue as a graffiti artist. On one of their painting excursions, Miles is bitten by a strange spider and then, well, you know...

He eventually crosses paths with the original Spider-Man, Peter Parker (Chris Pine). And, as the plot would have it, parallel universe portals will open and allow in a whole fleet of different Spider-Men, Spider-Women, Spider-Pigs and Spider-Robots. That group is comprised of Peter B. Parker (the invaluable Jake Johnson), Gwen Stacy (Hailee Steinfeld), Spider-Ham (a mishmash of Spidey and Porky Pig voiced by John Mulaney), Peni Parker and her robot (Kimiko Glenn) and, best of all, Nicolas Cage as the black-and-white Spider-Man Noir.

So Miles is one of many Spider entities on hand to go up against Wilson Fisk a.k.a. Kingpin (Liev Schreiber), whose corporation is responsible for the rip in time allowing all of his adversaries into his corner of the universe. The reasons why are convoluted, but discernible if you pay close attention. Like any good comic book, the movie is stacked with action, plot threads and many twists and turns.

I'm not a big comic book collector, but I did go through a phase where I was reading graphic novels (often compilations of a comic series) and a few of those artists really grabbed me. I loved the artwork of Bill Sienkiewicz in an Elektra Assassin series he did. Much of the art in Into the Spider-Verse reminds me of the work of Sienkiewicz and those like him. Comic art with a nice level of depth to it.

Spider-Verse, to me, plays like every frame is a page out of those awesome graphic novels, edited together into a movie. There's a slight jaggedness to the flow of the film, an almost stop-motion feel to it at times. The film is absent of anything that could be remotely considered a boring visual moment.

The movie is also very funny, poking fun at past Spider-Man movies and taking advantage of Johnson's comic timing. Lily Tomlin voices a very different Aunt May, who is more like Batman's Alfred with a little more edge. Yes, there's a Stan Lee cameo and, coupled with his also-animated cameo in this year's Teen Titans Go to the Movies, Lee made some pretty great, unusual cameos in the year he left the planet.

Honestly, while I enjoy Tom Holland as the live action Spider-Man, this sort of animated offering is more up my alley. There's a new Holland movie (along with the next Avengers) coming next year, but I want more Spider-Verse. This is surely one of the best movies of the year, the best Spider-Man movie to date, and one of the best animated films ever made. Yeah...it's that good.