Upstairs Film is presenting a film festival as part of the Club Congress 21st Birthday Party celebration being held over Labor Day weekend. The world premiere of Going Back to Tucson: Live at Hotel Congress, filmed at last year's Club Congress 20th anniversary event, is on Saturday, Sept. 2, at 3 p.m. , with another screening on Monday, Sept. 4 at 2 p.m.

Other films include a return screening of the High and Dry documentary, on Tucson's music scene, on Sunday, Sept. 3, at 3 p.m. , and Monday, Sept. 4, at 7 p.m. ; Allison Anders' Border Radio (starring John Doe and Dave Alvin) Saturday, Sept. 2, at 1 p.m. ; and the Tucson premiere of Valley Fever: Green On Red--Live at the Rialto Sunday, Sept. 3, at 1 p.m.

All films will be shown at The Screening Room, 127 E. Congress St., in downtown Tucson. Admission will be $5 for individual films or $30 for a full-admission wristband to the entire weekend of film and music. Tickets to individual films can only be purchased at The Screening Room box office on the day of each film. Wristbands can be purchased at the Rialto box office, Zia Record Exchange, Bookmans and online at www.hotelcongress.com. For a full schedule of films, see www.hotelcongress.com/21st or www.upstairsfilm.com.

The Independent Film Association of Southern Arizona (IFASA) is currently accepting submissions for the Fourth Annual Three Minute Thriller Contest. Entries that are accepted will be screened at the Halloween event at the Loft Cinema on Saturday, Oct. 28. For rules and entry details, check www.ifasa.net (which was still under construction as of our press deadline). Deadline for submissions is Friday, Oct. 20.

The September meeting of IFASA is Monday, Sept. 11, at 6 p.m. at Access Tucson, 124 E. Broadway Blvd. Contact IFASA president Brian Mulligan at 349-8249 or mclaff9@earthlink.net for additional information. You can also get on the Yahoo! Groups page at movies.groups.yahoo.com/group/ifasa.

The 14th Annual Lesbian Looks Film and Video Series has two screenings in September, followed by additional screenings in October and November. The documentary Zero Degrees of Separation, about Israeli and Palestinian gays and lesbians, screens at 7 p.m. on Tuesday, Sept. 26, in the Integrated Learning Center, Room 130, on the UA campus. The German film Unveiled plays at 7:30 p.m. on Friday, Sept. 29, in the auditorium of the Modern Languages Building at UA. Both films are free.

Filmmaker Steev Hise brings his documentary On the Edge: The Femicide in Ciudad Juarez to the UA's Aerospace and Mechanical Engineering Building (on the corner of Mountain Avenue and Speedway Boulevard) at 7 p.m. on Monday, Sept. 25. On the Edge explores the cultural, political and economic conditions that have allowed the murders of hundreds of young women in Ciudad Juarez, Mexico, to go unsolved. He will be on hand to lead a discussion after the free screening. For additional information, go to www.political.detritus.net/juarez. This is part of the monthly Voices of Opposition film series. Check www.voicesofopposition.org for full details.

Monday, Oct. 2 is the deadline for submissions for the Pura Inspiración (Pure Inspiration) Film Contest. Sponsored by Tucson's Reel Inspiration, the festival is "seeking documentary, animated and narrative films celebrating the good in the world including everyday heroes." There is a Celebrating Cultural Heritage Award, a Teen Competition for young filmmakers 13-18 (films five minutes or less) and a Children's Showcase for kids 12 and younger (films three minutes or less). Pura Inspiración is part of the Puro Mexicano: Tucson Film Festival at the Fox Tucson Theatre Nov. 3-5. There is an entry fee for all submissions; for full information, contact Jana Segal at 325-9175 or info@reelinspiration.org, or check the Reel Inspiration Web site at www.reelinspiration.org.

EVENTS AT THE LOFT First Friday Shorts: Tucson cartoonist Max Cannon ("Red Meat") hosts the First Friday Shorts film contest at The Loft at 9 p.m. on Friday, Sept. 1. Winners receive $100 and automatic entry in the End of the Year Showdown in May 2007. $5.

Roller Derby: Local documentary Tucson Roller Derby Presents: Hits, Highlights and Catfights has its big-screen debut at 7 p.m. on Saturday, Sept. 9. Local roller girls will be on hand to talk about the film, answer questions and sign copies of the just-released DVD. $5.

Short Films: The 2006 Manhattan Short Film Festival will run nightly at 6 p.m. from Friday, Sept. 15 through Thursday, Sept. 21. The Loft is one of more than 80 venues in the United States, Europe and Canada that is holding the festival simultaneously. Audience members will be asked to vote for their favorite films, with the worldwide tally announced in New York's Union Square Park. $8.25 general admission, $5.25 students seniors and military, and $4.50 for Tucson Film Society members.

Bruce Campbell: B-movie filmmaker Bruce Campbell visits for a screening of his film Bubba Ho-Tep and to sign copies of his book Make Love the Bruce Campbell Way. There will be an early book-signing and Q&A at 6 p.m.; he will the introduce the film at 9 p.m., followed by another Q&A, on Tuesday, Sept. 26. $8 general admissions, $6 TFS members.

Kirby Dick: Academy Award-nominated director Kirby Dick brings his new exposé on the film-rating board This Film Is Not Yet Rated at 6 p.m. on Saturday, Sept. 30, and noon on Sunday Oct. 1; normal general admission prices apply. Sick, Dick's film about performance artist Bob Flanagan, screens at 10 p.m. on Saturday. $5.

The Loft Cinema is at 3233 E. Speedway Blvd. Call 795-7777 or check www.loftcinema.com for a full schedule of films and events, and further information. 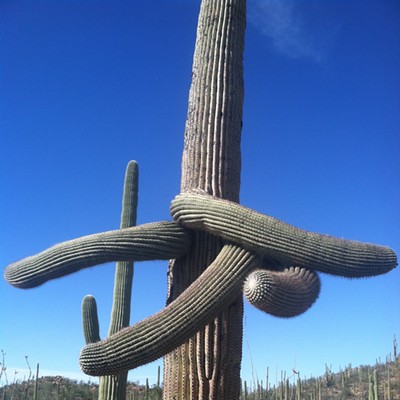