In the Big Time

Jimmy Kimmel made his way from the Tucson airwaves to a new late-night talk show.

Listen to Tom Danehy on KTKT, 990-AM from 1-2 p.m. Mondays, Wednesdays and Fridays. He annoys the crap out of the conservatives who call in.
After the Super Bowl game, ABC-TV introduced the latest entry into the late-night talk show sweepstakes.

This has long been a lucrative time slot for anyone who could make a go of it. Alas, for decades, NBC dominated late night, first with Steve Allen, then Jack Paar, then Johnny Carson. CBS is doing OK with David Letterman, but Jay Leno still wins the time slot handily.

Other networks have also tried to chip away at the Tonight Show juggernaut, with limited success. Arsenio Hall helped elect Bill Clinton and Magic Johnson (my favorite basketball player of all time) helped out by giving everybody a real easy answer to the question, "Who's the worst talk-show host EVER?"

So now, ABC, which briefly tried to float the idea that it was going to steal Letterman away from CBS, is getting back in the race, and it is doing so with a rather unlikely candidate. ABC's Late White Hope is none other than Jimmy Kimmel, the former Man Show co-creator and co-host, a former NFL pre-game show ne'er-do-well and, as a handful of you may remember, a former Tucson morning drive-time disk jockey.

Back in the early 1980s, KRQ went on the air with a Top 40 format and quickly rose in the ratings. Much of it was due to the morning guy, Mike Elliott. Tucson old-timers might remember Mike from some of his charitable stunts, or from the quasi-public-service announcement he did for a chain of movie theaters in which he had the exact same hairdo as Adam Sandler in The Wedding Singer.

Anyway, Mike was stunningly successful by anybody's standards. He reached a point where he had a 25 share, which means that one of every four turned-on radios in town was tuned to his show every morning. (In most cities, the top-rated show will have a share in the 10- to 12-percent range.) One time, to help raise money for some guy's medical procedure, Mike sat in every seat at the UA football stadium.

Mike's success made him a very popular target for radio headhunters, and he ended up in Orlando, Fla., making twice as much as he had in Tucson. Then he moved to Tampa and doubled his salary again. But he missed Tucson, and KRQ missed him. (The time slot's rating were more than sliced in half after he left.) So, he came back and brought Jimmy Kimmel with him from Florida.

I used to be on their show for a while back in the early '90s. Jimmy was absolutely hilarious. He and Mike liked to golf, so Jimmy would scam free rounds of golf for us, claiming that we were going to do a golf segment on the show. James Rivas (who goes by the DJ name "The Manic Hispanic") would round out our foursome.

Jimmy wasn't the best golfer, but he could Rodney Dangerfield with the best of them. He would secretly loosen the belt that holds a golf bag onto the back of the golf cart, so when somebody took off in the cart, the bag and all the clubs will spill out onto the course. He also liked to drive the cart onto the fairway and mash other people's golf balls into the turf. The one-upsmanship soon escalated and reached a crescendo when one of the foursome urinated on the seat of the golf cart that was to be driven by the person who was busy trying to sink a long putt.

Needless to say, we didn't get asked back to a whole lot of courses.

While he was here in Tucson, Jimmy tried to branch out and write for The Weekly. He pitched this idea of being a tongue-in-cheek food reviewer that wrote about fast-food places. I went with him to Jack in the Box on his spec assignment. I even suggested that he refer to tacos as "crepes frozen in mid-flip." The editor at the time, Dan Huff, liked his stuff, but The Weekly had a budget the size of Hitler's heart, so they passed on Jimmy.

Meanwhile, Jimmy and Mike were joined by Betsy Bruce and the morning show started moving back up in the ratings. Unfortunately, radio suits employ an equivalent of the hurdle rate (a business "principle" that basically says that it's not good enough to simply make a profit; you have to make a profit that's bigger than last year's profit). The ratings were on the rise, but they weren't skyrocketing, so the suits decided to make a move.

They fired Mike and Jimmy and kept Betsy Bruce. (Jimmy always equated it to the final episode the The Mary Tyler Moore Show, where a consultant fired Mary, Lou Grant and everybody else, but kept Ted Baxter.)

Mike used the money from the buyout to buy his own station in his native Maine, and Jimmy landed a gig at KROQ, the hottest station in Los Angeles, so I guess it worked out for them. Betsy went on to team with Mojo Morales and was quite successful for a while at KRQ until the soulless suits eventually fired her, too.

Jimmy's first couple shows were uneven, at best. He served liquor to his audience the first night and some woman puked during the show. Then, he had Snoop Dogg as his guest co-host and ... let's just say that Mr. Broadus has had a bit too much gin and juice over the years.

I wish Jimmy well, but he faces a huge uphill battle. I e-mailed him the other day and told him to stop by Tucson some day. There have been several new golf courses built since he left and from what I understand, golf cart seats are now waterproof. 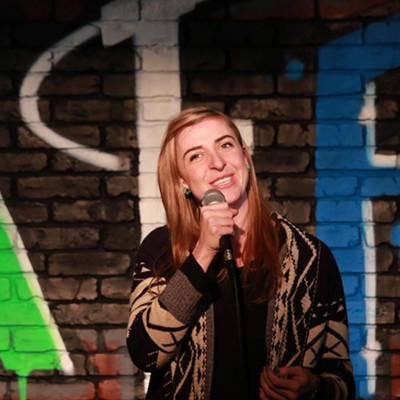