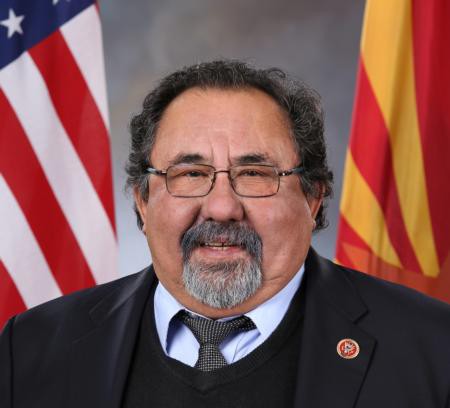 Courtesy photo
U.S. Rep. Raul Grijalva: “At that point, you’re inviting a foreign power—like Russia was invited—to come and interfere with our own election in 2020.”
Democrat Raul Grijalva has represented Southern Arizona in Congress since he was first elected to the U.S. House in 2002. He recently appeared on the community radio KXCI program Zona Politics with Jim Nintzel to talk about impeachment, immigration and other issues. This is a condensed transcript of that interview that has been edited for clarity and length.

It has been a busy November in Washington with our first impeachment hearings in about two decades. The investigation is still unfolding, but what's your takeaway right now from what you've seen so far?

We've seen there was an effort to extort from the new president of Ukraine a statement that they were going to investigate Joe Biden, his son, and the energy company Burisma in exchange for the release of the military funds of close to $400 million that Ukraine desperately needs to hold off Russia. And at that point, you're risking national security. At that point, you're inviting a foreign power—like Russia was invited—to come and interfere with our own election in 2020. I think that's pretty serious. And the denial of information or witnesses, I think that's obstruction of Congress. Now it's time to do a final report that I am certain is going to recommend articles of impeachment, send that to Judiciary Committee, prepare those articles. And sometime before the major holidays of Christmas, that vote should be before the House. That's my anticipation of what's going to happen.

Former U.S. Ambassador to Ukraine Marie Yovanovitch testified about the impact upon the State Department of having these communications going outside of normal channels and the lack of support for the professional staff there. Republicans are saying, "Well, Trump's the President of United States. He directs foreign policy, and if these guys don't get in line they ought to quit." And I'm just wondering how you respond to that?

Whether it was Obama or Bush, there were certain norms and certain traditions and certain protocols that are followed, particularly with regards to international affairs. Those have all been violated one way or another with this current administration. And to all of a sudden try to promote the idea instigated by Russia that it was Ukraine that did all that interfering in the 2016 election is playing into the same narrative that Putin and Russia had been promoting. That it wasn't them. That it was Ukraine, when every intelligence agency—the CIA, the FBI, the Department of Defense—have all said that what happened in 2016 was done by Russia, and no one else.

The House of Representatives recently passed the Grand Canyon Centennial Protection Act to block new uranium mines, creating a permanent moratorium on new uranium mining claims on over one million acres of federally protected public lands to the north and south of Grand Canyon National Park. This is something you've been working on since 2008.

The moratorium was in place for another 11 years. And during this period, studies were to be done about impacts on and off federal land, particularly in Navajo land, which has been devastated both in public health, but also in contamination of water, soil, air and the abandoned mines that have not been cleaned up and continue to pose a danger. But the Trump Administration immediately began to have a select committee of primarily uranium mining industries and other major energy companies form a task force to do what's needed to be done in order to stimulate uranium mining in this country. I felt—and many people felt—that the threat was imminent and that Trump would undo the moratorium established by President Obama and then open up that whole region that has been in moratorium now for nine years, since 2009. We would have this situation where—even though there's less than 1 percent of the uranium reserve that's in those million acres—it would suddenly be opened it up to uranium mining. That's a danger to the watershed, a danger to the canyon itself, a danger to the life around it. And the big issue for Arizona and for the whole Southwest, a danger to the Colorado River. And so I thought that the urgency was once again high, and the bill passed the House with a really good margin. Sen. Kyrsten Sinema said she was going to do the companion legislation in the Senate, and then we'll go from there. It'll be tougher in the Senate considering McConnell's there. We have sent 300 pieces of legislation to the Senate. And the Republican majority there has yet to act on anything significant from gun violence to Grand Canyon, to infrastructure, to reducing drug prices, to voter integrity, and protecting us from any other attacks on our voting on the election in 2020. And the list goes on and on. And not one action out of it.

You've sponsored the Veterans Visa and Protection Act of 2019 so that undocumented veterans won't be deported.

You have to almost separate this from the issue of immigration, although people have a hard time doing that. These are men and women that served our country in uniform as volunteers. Many of them saw combat. They came back home. And because they were nationalized citizens, they were permanent resident aliens. They had a green card, but they didn't have the full protection of citizenship. So they did something wrong. And every one of them will admit. And 70 percent of those issues were dope, and 98 percent were nonviolent. And they did their time in a state, or federal, or a local or a county detention center. Whatever the sentence was, they did it. Upon completing the sentence, they're picked up by ICE and deported to Mexico or the Philippines, etc., primarily to Mexico.

And all we are saying in the legislation, for somebody that is a honorably discharged veteran, there should be a different category. And they should be separated and dealt with differently, and be given an individual opportunity to deal with that question of not having the legal status as a citizen. It should have happened while they were in the service. It didn't. And every one of these men and women will say, "I did something wrong and I paid the price, but now I have a double price because I'm deported. I don't know this country. My family's not there." We want a separate category that deals with those individual veteran cases in a different way that allows them to stay in the country after they paid their debt to society and begins the process to make their status permanent and legal.

We now have new sections of a border wall going up in Arizona, much to the dismay of some environmentalists, who say the project managers are draining the sensitive aquifers around these desert areas in order to make the cement for the wall. And in the longer term, they're cutting off access between the United States and Mexico for wildlife crossings and such. Is there any stopping this wall construction?

The Supreme Court unfortunately gave a Trump a source of money when they OK'ed that he could divert the Department of Defense money for the wall. But even if you talk about all the rhetoric, it's been minimal. It's been the replacement of existing facilities in terms of what's been constructed, and most of it on public land because they can waive all the rules. When you get the parts of Texas and other parts where they're in court on eminent domain issues, and they've been in court beginning with the Bush Administration and with the Obama Administration, that becomes a little more difficult. That taking is much more difficult. The effectiveness of this wall is minimal at best and doesn't really change the dynamics of unauthorized people coming into this country. So it's not effective, but the effect is very negative.