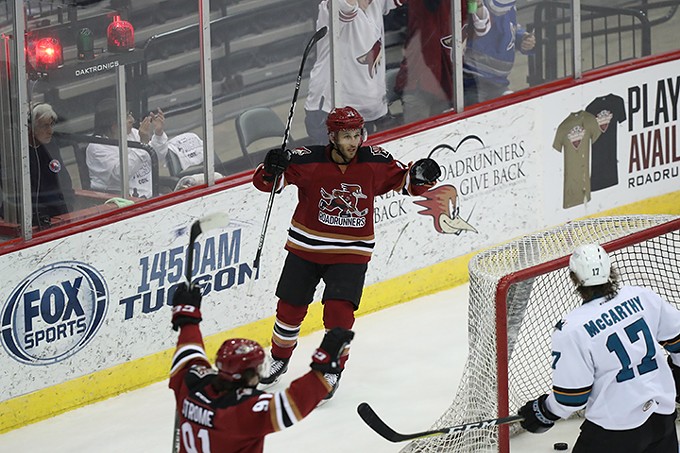 Mark and Elizabeth Domenick gallantly marched into the airy concourse of Tucson Arena on a balmy Wednesday evening.

The career army man and his wife, who moved to the area in 2002, grew up in the hockey haven of New Jersey—venturing to dozens of New Jersey Devils, New York Rangers and Philadelphia Flyers games over the years.

The couple wasted no time in doing their part to support the fledgling franchise, buying a pair of season tickets for the team's inaugural season.

They stayed on this winter, making the voyage to venerable Tucson Arena to watch first-year Coach Mike Van Ryn and company.

They were treated to a season few, if any, hockey experts saw coming, with the Roadrunners clinching the top seed in the AHL's Western Conference. They watched as the squad skated its way into the playoffs for the first time, posting a 42-20-6 record, with a conference-best .662-win percentage.

Mark sees proof that fellow Tucsonans share his enthusiasm for the pulse-pounding adrenaline rush that is professional hockey.

"We're from the East Coast, so hockey's a lot bigger there," Mark said. "But I think there's a lot more people coming. We're seeing it on the news. I think it's just neat how it's catching on down here."

The most important aspect of being a season ticket holder for Mark and Elizabeth is the rock-solid relationships they've built with the team's players and the unconventional family of hockey nuts sitting around them at games.

"I've thoroughly enjoyed coming to the games and the people that we sit with," he said. "It's our own little community now by our seats, it's just a whole lot of fun."

The Domenicks' experience as second-year season ticket holders are similar to that of Tucsonan Eric Hanna and his 12-year-old son, Kaleb.

The duo has flocked to the Downtown arena since the team's move two Aprils ago, with Kaleb skating for the local junior team sponsored by the team.

Eric has seen how quickly the community has embraced the team, smashing perceptions of how a mid-sized city in the heart of the Sonoran Desert would embrace the sport.

"I've seen people, first time ever coming to a hockey game—period—and they turn right around and buy season tickets," Eric said. "I've seen that happen like four times already this season. So it's definitely catching on."

Kaleb's experience is similar, describing how quickly he and his friends have embraced the cold weather sport, despite the Tucson Arena rink being the only sheet of ice in town.

"It's pretty cool because there's natural AC," Kaleb said. "And I don't think there's any other sport that involves ice, so it's awesome to be here."

The experience each of the team's season ticket holders shared is the result of countless hours spent by team officials, like President Bob Hoffman, in crafting a memorable game day experience.

For Hoffman, who's spent more than a decade working around professional hockey, the key is putting a quality team on the ice, while creating a game day atmosphere to remember for fans old and young alike.

"I definitely wanted to dip our toe in the water of the playoffs for sure," Hoffman said. "It's a great accomplishment for year two to be able to do that, and to let your core fan base get an idea of what that's about and what it's like."

Hoffman believes the Roadrunners' historic regular season has whipped up support, driving more and more people through the turnstiles at the arena.

The longtime executive knows what his team's success, in winning their division and conference, can do to build a rock-solid fan base.

He's hopeful that the crowd's response to the team's 6-0 thrashing of the San Jose Barracuda in Wednesday's playoff debut is the next step in that evolution.

"Winning the conference, I mean that's a great accomplishment that many franchises go decades without doing," he said. "So, for us to have done that in our second year, that's fantastic."

Hoffman said he believes the team's year-long success will only boost their attendance numbers, growing the paid attendance from this year's average of 4,217 fans per game.

"I think it's growing, and I think that this playoff push is definitely going to win over and uncover new core fans to jump into our fan base," he said.

Van Ryn, who played 353 games at the AHL and NHL level and another two years as an assistant coach in the AHL, knows how important home ice is to a team.

He gawked at the noise and energy in the venerable arena on Wednesday night, when a crowd of roughly 4,800 white-clad fans screamed its way into the team's hearts and minds.

"It was fun, and I'm glad we were able to put on a show like that for the fans. It was a tough game," Van Ryn said. "When we were in San Jose, we had half the team going, the other half, maybe wasn't playing their best, but tonight, everybody showed up, everybody contributed."

Van Ryn attributed a sizeable portion of the team's success in Wednesday's 6-0 slaughter to the crowd's energy, gushing about the noise generated inside the arena.

He believed the team's "White Out," which encouraged all fans to wear white in solidarity with the team, spurred their on-ice energy.

"It was awesome. Super loud. It was great," he said. "I thought the atmosphere was awesome, how people see what it can be like and how much fun the games are."

"We love playing in front of the home crowd," Strome said. "It's a White Out, which is pretty cool to play in front of. It looks like the arena's sold out to the max."

Goalie Adin Hill, who stopped 21 shots on Wednesday, gleefully recalled the energy in the stands, describing the crowd's enthusiasm in great detail.

The Minnesota native, who's played with the Roadrunners since their inception, is a believer in the town's vitality as a hockey haven.

Hill gushed about the White Out and how much of a boost it was to the team to have the crowd's unwavering support in a pivotal moment in the five-game series, giving the home squad a 2-1 lead over the Barracuda.

"I was here last year when we started, and the support right from the get-go has been unbelievable for us being in our second season," Hill said. "To have a showing like this for playoffs and have the building this loud is great."

The Roadrunners' luck continued last Friday, clinching a 3-1 series win over the Barracuda in a convincing 3-0 victory. The team takes on the Texas Stars this week in the Pacific Division Finals.