Hurry Up and Wait

Several months ago, a plan for the area was approved by the City Council (See "Beautification or Gentrification?" Feb. 26) that called for new housing near the railroad tracks, as well as landscape improvements and an umbrella organization to manage the government-owned historic buildings now rented by artists. The master plan also recommended that the route for the long-discussed but never funded $100 million last mile of the Barraza-Aviation Parkway be shifted to run exclusively along the north side of the tracks east of Stone Avenue (See "The Last Mile" Feb. 12). If that wasn't done, many area artists questioned the wisdom of planning anything for the Warehouse District, since the road would eventually result in widespread destruction.

While city of Tucson officials clearly indicated in February that a look at revising the almost 15-year-old alignment would be done quickly, that hasn't happened. Instead, the review has been put on hold pending the start of construction of a new Fourth Avenue underpass.

"It's incumbent on us to respond to the warehouse district plan and re-evaluate the Barraza-Aviation plan before major investment occurs in the district," says Brooks Keenan, engineering manager for the Tucson Department of Transportation. But, he adds, "We have a lot of time to look for an ultimate solution," and says he thinks it will happen once the Fourth Avenue project is under construction next year.

The delay in taking a new look at the parkway's last mile will impact several warehouse district projects. For starters, a now vacant building on Sixth Avenue--which once housed the Sangin Trading Company and then a rag-tag band of young artists--will remain empty.

"We'll leave it boarded up until a final alignment for the last mile of the Barraza-Aviation Parkway is decided," says Bob Peterson, planner for the city's Transportation Department.

Another project that will be in limbo until the roadway issue is finalized is the proposal to build housing on a vacant piece of city-owned property near Stone Avenue and Sixth Street. The parkway's current plan dissects this block, but a realigned route could make it available for development.

While review of Barraza-Aviation's last mile is stalled, a related project is being evaluated. Officials are studying alternatives to provide an interim parkway connection to Sixth Street, which utilizes an existing street to link with the future two-lane roadway somewhere west of Fourth Avenue. A draft report should be completed in October, with public meetings held a few months after that.

Meanwhile, efforts to implement a management committee for the warehouse district are well under way. A 15-member interim board of directors, including five artists, has been selected by the city of Tucson for WAMO, or Warehouse Arts Management Organization.

"We tried to get folks who are committed to the vision of the master plan and moving it forward," says Peterson. "It's an advisory group, but the city will talk to it for a recommendation on almost every action that affects the warehouse district."

Presently, the group is only dealing with nine buildings, since that is all the city is managing. But as money becomes available for structural repairs, additional warehouses will be transferred by the State of Arizona Department of Transportation to local control.

While it hasn't been too busy since its recent inception, WAMO has recommended a five-year lease be approved for the old juice factory at 140 W. Sixth St. Now occupied by TOPGEM Minerals, the longer lease is a significant departure from the 30-day termination clause contained in earlier ADOT-approved rental agreements.

WAMO also oversaw $42,000 worth of needed improvements to the warehouse on Toole Avenue occupied by the Museum of Contemporary Art. Future rehabilitation projects on other buildings will also be planned as funding allows.

These repairs, however, will only cover major structural problems. Other required building code improvements will be the responsibility of the leaseholder, but Peterson pledges the city won't be heavy-handed in requiring the work be done immediately.

"We want to take a common-sense approach," he says. "We don't want to throw anybody out (of their building)."

Funds for the warehouse district are coming from a number of sources--the city's Back to Basics program, an Arizona Heritage Fund grant and a two-year, $216,500 loan from the Pima Association of Governments, which will be repaid through the artists' monthly rent payments.

Future projects for WAMO include implementing a landscaped artwalk along Stone and Toole avenues and developing criteria to rank prospective leaseholders. These criteria will then be used to find occupants through an open and competitive process for three now-vacant district warehouses, including the Sangin building.

Even though he was once a harsh critic of the city's plans for the warehouse district, artist and board member David Aguirre is now pleased with what is happening with WAMO. He hopes to incorporate the organization shortly, and that it will eventually be primarily controlled by artists.

"The city has been great as a resource partner," Aguirre says. "There is a true city/artist collaboration. There will be disagreements up the road, but right now we're working our problems out." 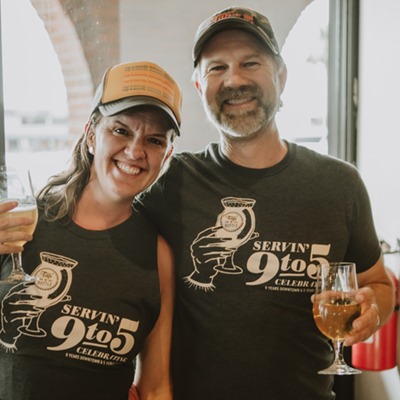