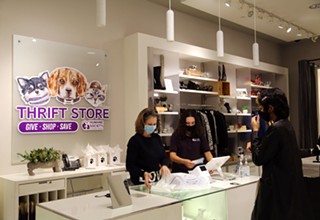 The Humane Society of Southern Arizona recently moved its thrift store to a new, temporary location at Park Place Mall. The new store serves as more of a boutique than their previous location, but continues to fund the Humane Society’s goal of helping Tucson’s homeless cats and dogs.

Humane Society Chief Development Officer Diana Cannon said the recent grand opening was a huge success, with a line of people waiting to get into the store.

“It’s exciting because now people who are just in the mall shopping stop in to see what we have,” Cannon said. “It’s increasing our exposure to people who may have never known about our store.”

The HSSA Thrift Store has been selling lightly used items to its customers for more than a decade. Just three years ago, they partnered with Sam Levitz Furniture, which has been supplying the thrift store with furniture that is then sold at discounted prices.

As they started to acquire more and more furniture, the HSSA team realized that there wasn’t enough space in their store to house their larger products, so they started looking for a larger location where they could properly display their furniture.

The HSSA recently discovered the perfect space for their thrift store, but they will not be able to move into that location until the summer 2021.

In the meantime, the HSSA decided to temporarily move their thrift store to Park Place Mall where they can both display their furniture and continue to accept donations. The organization permanently closed its former location on Speedway Boulevard on Dec. 19 and were able to open the doors of their new location to the public on Jan. 15.

At their new location on the east side of the mall, the organization has plenty of space to stage the available furniture. In addition, the store carries jewelry, artwork, designer clothing, designer handbags and antiques.

Loudon explained that the new store location is more like a boutique than a traditional thrift store. For the next six months, they will focus on selling furniture and collectibles instead of the cheaper knick-knacks that some customers may be accustomed to. The HSSA team decided to change their sales approach in order to adapt to the new mall environment.

The new and improved HSSA Thrift Store is now open to the public seven days a week during mall hours. While the atmosphere of the new location may be vastly different from that of the original store, the core mission remains the same: The HSSA Thrift Store still seeks to aid the animals and the people in our community.

The store’s profits go directly to the programs and services that the Humane Society of Southern Arizona offers, including low-cost clinic services, shelter adoptions, end-of-life services, and a variety of education programs that seek to reduce the number of homeless pets in the community.

The HSSA has seen an increase in pet adoptions since the onset of the pandemic. Cannon explained that this is likely due to the fact that people are spending more time at home in order to stay safe.

Even though more people are adopting, there are still countless homeless pets in the city of Tucson. The revenue made at the HSSA Thrift Store is instrumental in helping the Humane Society find a forever home for homeless cats and dogs.

“What I love about this work is that we’re taking people’s castaways and turning them into things that people want,” Loudon said. “We’re supporting our shelter and our

More by Special to Tucson Weekly

By Carol Roder and Special to Tucson Weekly

Breast Cancer Awareness 2021: Breast cancer can affect anyone at any age

By Mia Smitt and Special to Tucson Weekly

Support System: Arizona Gives Day Is More Important Than Ever

By Kate Maguire Jensen and Special to Tucson Weekly