How About a Mulligan? 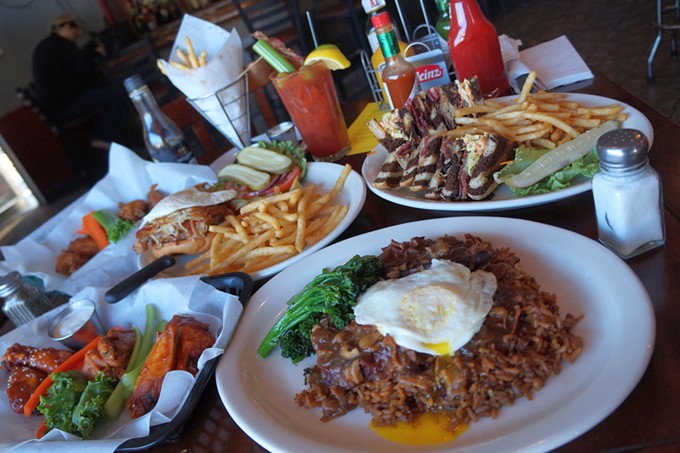 Mark Whittaker
Mulligan’s food is on par with the best sports bars.

CJ Hamm is a very Busy Guy. Not only is he the executive chef of Saguaro Corners, CJ is also a single father of 3, competed in an upcoming episode of Chopped, just quit smoking and recently turned a busy street dive bar into an open and friendly neighborhood pub. That is a lot on one man's plate, but he is taking it all in stride even if he hasn't slept much lately.

"When we moved in here this place was sort of like a cave," says Hamm. "There was this heavy green paint on the walls and old gross carpeting. Plus, there were so many golf ads on the windows you couldn't even see in. So the first thing we did was try to brighten everything up."

Hamm, along with partners Kade Mislinski and Dave Musso, who also own popular restaurants around town, ripped out the raggedy carpeting, repainted the walls and took down all of the unnecessary and very outdated sports bills and gave the 15-year-old bar a much-needed facelift.

"When we opened in December of last year, we got mixed reviews from some of the longtime regulars," Hamm says with a laugh. "Apparently a lot of them really liked the scary corners and dingy backroom. But they are starting to warm up to what we are doing here."

What they are doing, and successfully did, was turn Mulligan's into a chef-inspired local hangout inviting everyone, not just those looking to skulk in the shadows, to pop in, have a drink, watch the game and eat some classic comfort food done with inspired flourish.

"We couldn't change too much or get too wild with the food because those mixed reviews would just become negative ones," Hamm says. "So what we did was just update the menu and turn it into something both bar regulars and adventurous eaters can appreciate."

First thing to switch up, food wise, was the use of frozen or prepackaged items. The burgers are now hand ground from beef provided by local ranches, the veggies are cut to order before hitting the skillet and, best of all, there are a multitude of sauces to choose from that are made fresh by Hamm himself. In fact, when Hamm revised the menu, he wanted to establish a unique niche among sports bars by being boss of the sauce! Right now, there are well over a dozen wing and fry sauces to choose from, ranging from the familiar and mild to the unconventional and tongue-lashing scorch.

Being a music fan of almost all genres, Hamm has cleverly named some of his sauces after songs or artists to go with the pepper it was infused with. The Ghostface Killah sauce is made with the Thai ghost chili. Don't Fear The Reaper is, yes, made from the Carolina reaper variety. My personal favorite has to be Rock You Like A Hurricane, which features the incendiary scorpion butch pepper. They may be fun to say, but believe me, these sauces are not for the faint of palate. Because if you want a long-lasting—but tasty—mouth burn, the three mentioned seriously deliver the pain. Otherwise, stick with the more agreeable mango chutney, cilantro pesto or bacon gravy.

The bacon gravy can also be found as the topping for the Loco Moco Meatloaf ($13), a mainland favorite that has gone traditional island staple. This entrée is a beast of size and flavor. The perfectly cooked egg is there, but instead of white rice, it is served over Louisiana dirty rice and the hamburger patty is replaced by a savory meatloaf that is a standout on its own. As a big fan of club sandwiches and pastrami, Mulligan's Triple Decker Reuben ($12) was an instant hit. Paired with corned beef, sauerkraut, a sharp house slaw and homemade Thousand Island dressing, this dish should stand as a challenge to any deli that might foolishly try to open up in the nearby vicinity.

One thing that Hamm didn't really mess with was the bar, although he did install six more taps to house a regular rotation of local and craft beers to go with the standard macro brews you need to keep around if you want to operate even a mildly profitable sports pub. That, and a line of top-shelf liquors to pair with the top notch grub they now serve.

In fact, just over the bar they kept a bit of Mulligan's past. There is a strip of the old green paint to remind patrons of how things used to be as compared to today. Unless you enjoy lurking in the murk, Mulligan's is shedding light with a neighborly vibe and hearty, inviting food.