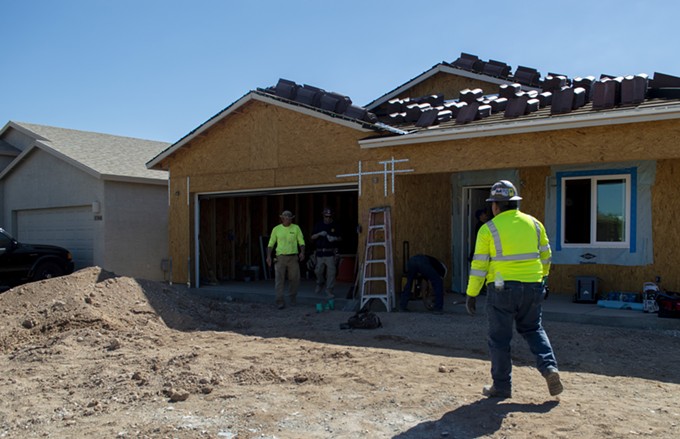 Christina Duran, Tucson Weekly
“These guys are in this element all day, every day for a living and then for them to take a day off and still do it, it’s an outstanding thing that happens,” said Daniel Freeman, building superintendent for Habitat for Humanity Tucson.

The sun glared down and temps rose to nearly 100 degrees at 6 a.m. Saturday as a group of carpenters installed windows and doors on a newly built home in a quiet neighborhood just south of the Pima Air & Space Museum.

The nine carpenters from Southwest Carpenters Arizona Local 1912, a union created more than a century ago, were volunteering with Habitat for Humanity Tucson, a nonprofit that helps families own or repair quality homes.

Union members can participate in the Carpenters Union Participation Program (CUPP), where they can help organizations like Habitat for Humanity and cash in their volunteer hours for prizes. They can even get help paying for school or medical expenses, according to Joseph Kobel, treasurer of Local 1912, who used some of his excess volunteer hours to help cover some of his medical expenses.

Ron Heilman, vice president of the Local 1912, said the union had previously volunteered before the creation of CUPP, so many members supported the creation of the program. While the program provides an incentive, Heilman said “it’s all about giving back.”

He said the organization works with other nonprofit organizations, such as Women Warriors, an organization supporting the female veteran community in Southeast Arizona.

As a former prison inmate, Ian Merkle, an apprentice with Local 1912, wanted to give back to the community as a way of compensating for his past criminal activity.

“When I was involved with criminal activities I think I took so much from the community that right now I just want to give back,” said Merkle. “If we can help each other out, and we can help out the community I think that’s where it’s at.”

At 19, Merkle was in and out of the prison system, falling back into old ways after every release. After being released in April 2017, Merkle went back to working at Jerry Bob’s for a year before joining the carpenter’s union.

With a little inspiration from his brother-in-law, Merkle looked into apprenticeship programs and zeroed in on the carpentry classes he took while attending Eastern Arizona College through the Department of Corrections. He began to look for a local carpenters union and found Southwest Carpenters.

“I wound up calling on meeting night,” Merkle said. “I got lucky. It was a Tuesday meeting night. I went there. Everyone was there. I got a job the same day, started as a level one apprentice.”

Merkle hopes to create a mentorship program whereby inmates can work with the union, with the help of the Department of Corrections to offer them guidance.

Volunteers like Local 1912 have helped Habitat for Humanity significantly as they continue to face a shortage of volunteers, especially with the overbearing heat. According to Daniel Freeman, building superintendent for Habitat for Humanity Tucson, the majority of their regular volunteers are snowbirds, who are currently out of state and will likely return in August.

“Crews, like these guys today, showing up is amazing,” said Freeman. “These guys are in this element all day, every day for a living and then for them to take a day off and still do it, it’s an outstanding thing that happens.”

Without volunteers and donations, Habitat for Humanity would be unable to absorb the costs of rising home prices, lumber costs or labor that continue to plague the market and provide quality homes.

“These folks are getting the same house, the same build, the same quality that anybody else is getting,” said Freeman. “Habitat is eating all of those costs and the only way we’re able to survive that is through all the grants and the donations and just the general involvement from the public is what keeps us going. If the public doesn’t get involved, we don’t exist. So that’s what makes us survive is the generosity of everybody that donates and gives, whether it’s money or volunteer time.”