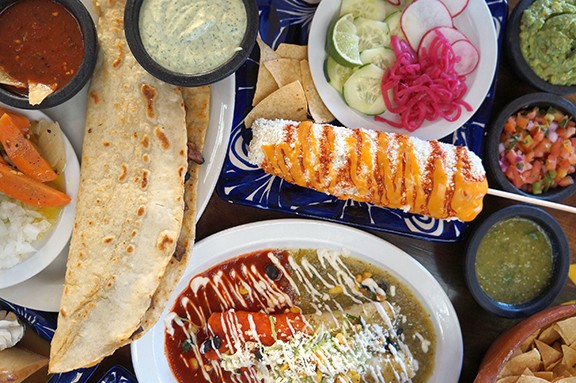 Given its slick design, televised menus, courteous staff and counter service, you could be forgiven for thinking that the eastside's Salsa Verde is some kind of chain.

But owners Patricia and Edgardo Corella have been dreaming of opening this restaurant since moving from a small town in Sinaloa, Mexico. Banamichi is roughly 200 miles south of Bisbee and is home to maybe—maybe—2,000 residents and the Corellas have long wanted to bring the flavors they grew up with to Tucson.

Those flavors are a welcome addition to Tucson's crowded Mexican restaurant scene.

Let's start with an appetizer: elote, or grilled corn on the cob covered in mayonnaise, crumbly cheese and spices. Salsa Verde's was easily one of the best I have eaten in or around Tucson.

Happily, Salsa Verde serves breakfast, and you can get your egg-filled taco or burrito fix any time of day. One of Patricia's contributions from her Sinaloan upbringing was Chilorio, a less greasy cousin of chorizo that is made up of slow simmered pork in a selection of spices found native to Banamichi. It is at the same moment decadent yet slightly delicate in flavor and texture, pairing well with almost anything on the menu. A duo of salads are available, with the standout being a chicken peanut salad with a house peanut dressing that should be bottled and sold. It is that good.

One of the standouts has to be the machetes, which are corn masa tortillas about the size of a Yeti footprint and filled to capacity with cheese and your choice of meat, or homemade refried beans if meat isn't on your diet. For less than $10, this bit feels like some kind of eating challenge and can easily be split between two people.

If you are craving a bacon wrapped burrito (and who isn't?) Salsa Verde now has you covered. In bacon. It makes you wonder if it the Corellas are trying to feed us or kill us. (It doesn't matter, because what a way to go!).

Before you leave, you have to grab some flan because their sheer size seems more like a generous slice of pie in a country diner than your usual serving of Mexican custard. Smooth and indulgent without being overly sweet, the flan is topped with freshly made whipped cream. Plus, Patricia has concocted a masterpiece by her own imagination in the form of these cocoa bars that are made from traditional Mexican cookies. Beyond that, beer and margaritas are available, because what would a Mexican restaurant patio in Tucson be without those two fine companions?