Horror in the Ice

The latest adaptation of The Thing has its share of good scares and decent-enough performances—but the film spazzes out toward the end, resulting in an admirable yet disposable experience.

It was a great idea to take John Carpenter's brilliant 1982 version of John W. Campbell Jr.'s short story "Who Goes There?" and make a prequel. Fans of Carpenter's masterpiece might recall that film's beginning, in which a couple of crazy Norwegians showed up at an American scientific outpost in the Antarctic and frantically shot at a seemingly harmless dog. Kurt Russell's chopper pilot eventually wound up at the Norwegian camp, where he saw some scary things ... and brought something back with him. This film tells the story of what happened to those Norwegians before Russell and his friends had their lives so rudely interrupted.

Simply remaking Carpenter's film would've resulted in something that couldn't possibly be as perfect as the '82 film. Carpenter was at the top of his game, and Rob Bottin's special makeup effects are now legendary. It's virtually impossible to compete with what these men did.

This version of The Thing draws much from Carpenter's vision in its look and sound. Therefore, in a way, first-time director Matthijs van Heijningen Jr. is being a bit of a copycat. Like the Thing, his film has absorbed the Carpenter flick and tried to replicate its tone, and in some ways, the movie is very much like Carpenter's. In others ... it's just not the same.

Mary Elizabeth Winstead plays Kate, a less-intense variation on Sigourney Weaver's Ellen Ripley from the Alien movies. Kate is an American scientist who winds up hanging with the Norwegians at their camp, where they are about to excavate what appears to be an alien life force from the ice. When the Thing breaks out and starts wreaking havoc, Kate's weapon of choice is, of course, a flamethrower.

The film follows the same path as Carpenter's film, with the Thing absorbing various members of the team—and leaving the viewer guessing about who has been infected. As in the Carpenter film, the team attempts to root out infected men in a pivotal scene that results in violent mayhem.

Since 1982, this thing called a "computer" has infiltrated movie special effects. Carpenter and Bottin used traditional, practical effects in their film, coming up with such movie awesomeness as the spider head and that razor-toothed mouth that bit the doctor's arms off.

Heijningen integrates CGI into some decent practical effects. However, I wish he'd left the computers out of it, because some pretty good ideas got polished up—and ruined—with gigabytes. The final Thing monster incarnation is hilariously terrible, featuring a key actor's giant face in its middle.

The good stuff includes a decent, disgusting autopsy on one of the Thing's many yucky forms. I also liked the moment in which Eric Christian Olsen's scientist had his encounter with the Thing, resulting in something that gave me the creeps.

The coolest thing in the movie happens during the closing credits, where Heijningen finds a way to link his film to the '82 movie. I won't give anything away, but it was neat enough to almost make me forgive the asinine final monster incarnation. Almost.

Winstead is a decent-enough performer, although the screenplay's attempts to make her a brainy, important scientist are silly. Apparently, her character was flown all the way to Antarctica at great expense to help excavate the monster. Her actual task: Nodding before somebody starts a drill. The rest of the time, she just stands around, looking worried.

Joel Edgerton and Adewale Akinnuoye-Agbaje (say that one three times fast!) play a pair of American chopper pilots who pick the wrong time to visit the Antarctic. Edgerton, like Winstead, is a capable performer, but is given relatively little to do.

The movie had its release date changed a few times, which is usually an indicator of production problems. Perhaps the director had something a little more minimalist in mind, and Universal made him blow things up with more CGI. For whatever reason, the production seemed to have problems, and the solutions may've taken the movie in the wrong direction. The final cut seems to have multiple moviemaking sensibilities clashing within.

The Thing is better than most other recent attempts to revive '80s horror icons. It's just not good enough to be considered a worthy endeavor, and I imagine it will be the last Thing movie we'll get for 30 years or so.

The Thing is not showing in any theaters in the area.

Speaking of The Thing, The Thing Tucson 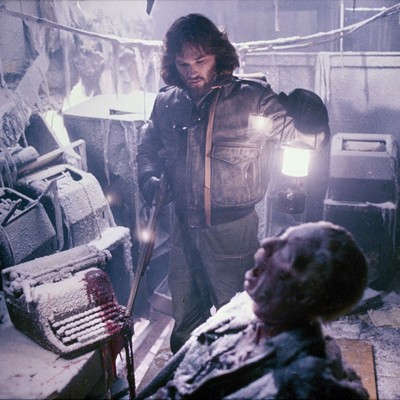 The Loft Cinema Shines A Spotlight On John Carpenter This Month, Here's Some Haikus About It