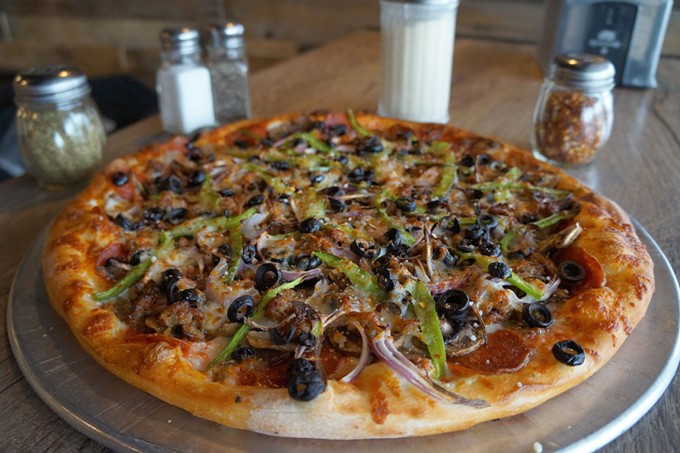 Twin Peaks Pizza is not named after the cult David Lynch TV show. That said...let's get down to business.

As a Tucson food fanatic, I tend to wander towards eateries in dive bars or ramshackle carts parked in a dusty plot off the highway. These are the places that get me going and excited about discovering new flavors, finding traditional fare done correct and meeting the hard-working people behind the low-profile gem. I also tend to have a high opinion of restaurants situated in strip malls. It has been rare to be let down by a funky café or exotic food terminal in a tight spot between smoke shops and shoe depots. Some of the best places serving some of the best food have usually been in slightly unfavorable situations, so when coming across a stand that isn't flashy and back by big bucks, intrigue gives way to thrill and eventually I want to type it out and let you good people in on the who and where.

Mind you, most shopping arenas in Marana usually steer quite clear of being "unfavorable," but in a non-descript throw of local and chain businesses is one of the best discoveries of late. At first, Twin Peaks Pizza almost came off to me as a possible concept brand for others to follow; it's extremely clean, the menu is concise and inviting, the staff were wearing company logo shirts and were pleasant and a decent-sized crowd was in the slight space. Having only been open a few months, Twin Peaks Pizza appears to already have a following.

Turns out the people that own the popular Italian restaurant Dominick's, just a few miles away on Thornydale, own and operate Twin Peaks. So that might be it. The food at Dominick's has always been enjoyable and the restaurant has had to expand a few times to meet the demand. In fact, Dominick's began as a grab-and-go pizza concept but evolved into what it is today, more of a sit-down, high-end but casual Italian place.

With just a few tables inside and a small patio, Twin Peaks Pizza was easily some of the most hearty Italian-inspired fare I have had in quite some time. Not exactly New York style, not really Neapolitan and definitely not fast food, the pizzas here are warm, robust and full of flavor by use of quality ingredients that are easily noticeable from nose and mouth. Sorry if I am coming across like a commercial, but to be honest with you, I was prepared to not like Twin Peaks Pizza. Don't ask me why, but usually an offshoot of a touted first concept tends to wear thin, as if owners are betting on the reputation of the original to carry the slack load of its cousin.

The first bite of the supreme pizza had me at hello. Chef Jon Harrington knows what we want in a pizza, he knows what we want in a sandwich and he knows what we all want to eat: This. The smoothness and pull from the California buffalo milk mozzarella, sitting atop the meaty vine-ripened tomato sauce without a hint of sugar, only complimented the generous amount of farm-fresh vegetables, pepperoni, Italian sausage and meatballs. Each bite was a perfect bite because each bite was loaded.

If that's a bit too much ground animal product for your liking, you need to try the white pizza option because its simplicity is only counteracted by the amount of pungent garlic and velvety mix of Romano and mozzarella adding refinement to the menu.

The garden salad was refreshing too. But then you have the Italian Hoagie which would make any linebacker from the Bronx weep from nostalgia and intimidation. In fact, all their hoagies might inspire you to unhinge your jaw to get it all in. Twin Peaks Pizza isn't messing around. The wings were bold and tasty too and, if you need to have a good post-holiday cry, try the "extra hot" sauce. What's also eye— and stomach—widening is the XL pizzas, at 18 inches rather than the usual 16 inches. That's a lot of pie when you're at home watching the game or avoiding the lines in the return department.

Rumor has it that Twin Peaks will be installing a few beer taps soon and possibly adding on some pasta options. But they still want to keep it small, keep that feel of a neighborhood pizza parlor. No need to go bigger—because the food here is big enough.