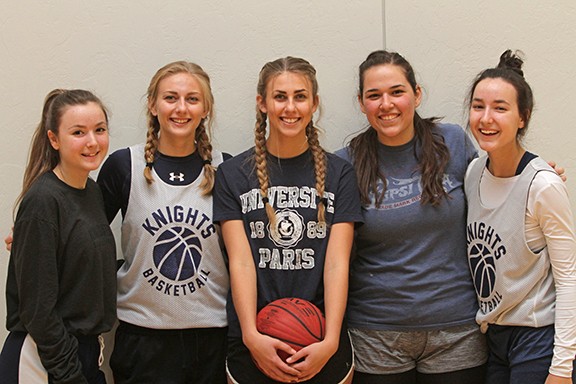 The banner, commemorating last year's Division 1A South conference championship in girls basketball—the first in the school's history—serves as a reminder of what the program can do under longtime coach Tom Danehy.

Danehy is known for his laissez faire coaching philosophy that's void of the complicated schemes that have inundated basketball at all levels.

"I sit there, when the refs come over they go, 'Coaches box is right here.' I always say, 'If I stand up, give me a 'T' dude; I'm just gonna watch the game," Danehy says. "I'll joke with them and everything. If somebody does something bad, they know they did something bad. What am I gonna do, am I gonna yell at them? No, I just let them play."

His hands-off coaching style has worked so far, as Danehy notched his 300th career win earlier this season. He's never had a losing season in 13 years, at Salpointe Catholic, Green Fields School and Immaculate Heart, where last year's team posted a 28-4 record, making it to the semifinal round of the 1A state playoffs.

His unique coaching philosophy seems to be working once again this year. The Knights are ranked fourth in their division—with a 22-3 record overall (including a perfect 16-0 record in non-tournament contests) as of deadline.

Their record alone is impressive enough, but even more jaw-dropping when considering the team only sports five players on the roster.

Danehy was shocked to see so few players on this year's squad, even at a school with an official enrollment of 57 students, noting that last year's team had 12 members.

Junior point guard Emily Haynes, who Danehy has nicknamed 'Money,' for her ability pass and shoot effectively, has learned to enjoy playing all 32 minutes in games.

"[I love] that I can depend solely on every single person," Haynes says. "There's not one person who can't pull their own weight. We all know exactly what to do, how to play, we have perfect chemistry with each other, I definitely enjoy that the most."

Others, like senior post player Grace Aroz—one of two seniors on this year's team—was incredulous when Danehy told the team that there'd be no bench players to bail them out.

"I remember when Tom first told me, 'You better get used to playing the whole game,' and I was like, 'What? That's not possible,'" Aroz says. "But in the game, I don't think about tiredness. I'm just like, 'Okay, I'm gonna help out my team.' We just think of the team. We get tired, trust me, we get tired. But, we just push through, and we play."

The team's bond is boosted by having a pair of sisters—in Emily and her sister Catie, a sophomore, as well as senior Sarah and sophomore Therese Martin.

"Honestly, I love playing with my sister," Therese says. "It is a lot of fun and I mean this is the only year we'll get to play together. But I know she helps me out a lot and everybody else does, too, since I'm the youngest on the team."

Sarah says the team's bond is a testament to Danehy, and his ability to maximize effort from his players without resorting to yelling or more tyrannical coaching methods.

"Tom lets us do what we need to do," she says. "My freshman year, I didn't have Tom as coach. I wasn't really allowed to shoot. With Tom, he's like, 'You know what? If you think you can make it, I think you should shoot it.'"

The team's quest to bring home the school's first state championship dates back to those summer practices, when they'd go from 9 a.m. to noon, six days a week, through the month of June, inside the school's non-air-conditioned gym.

Fast-forward seven months, and Danehy's grueling summer workouts appear to have accomplished their goals, with the Knights in firm position of first place in the region.

He's lessened the team's work load during the week through the season, to the point where their typical practices contain minimal amounts of drill time, followed by fun activities, like shoot arounds and half-court shooting contests.

Danehy knows how dedicated his players are, and that they are more than capable of motivating themselves to put the work in to succeed.

"Emily works at McDonald's, and she'll work an eight-hour shift on Saturday and then she'll call me up and go, 'Can you meet me at the gym, so I can shoot?'," Danehy says. "Stuff like that, so again there's no secret. I just say it's my effervescent personality, but it's not. It's just that I tell them if you do this, this is going to happen. Most kids buy into it."

It's safe to say this year's Knights squad has definitely bought into his philosophy, inspiring championship dreams for players.

For Emily, winning a state championship would be a fitting conclusion to a memorable season.

"Since I was a freshman, I've wanted to win a state championship," she says. "As you can see there's no banners, we have that one banner in our whole entire gym, so to just bring that back to our school, since our school's been so bad for so long and now it's finally getting good, it would just be so cool to actually bring that home and say we did that because we put in so much work, especially over the summer."

Catie Haynes knows the team is capable of great things, regardless of its roster's depth, thanks to the bond built during their shorthanded season.

"I would say don't underestimate us by our size," Haynes says. "There is really only five of us on varsity, but we come up strong and we play strong."